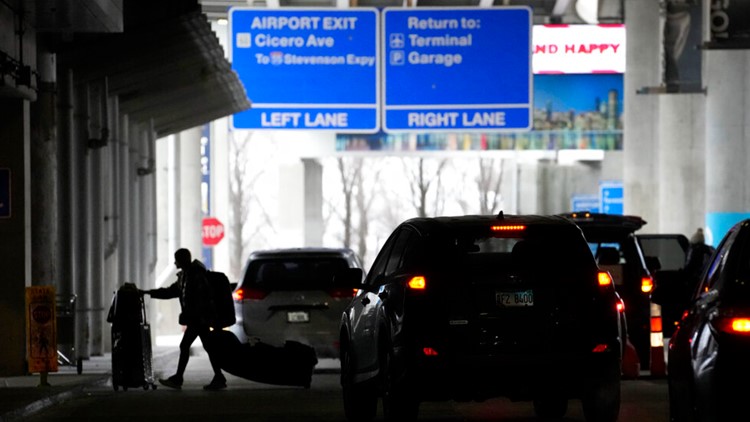 Authorities across the country are worried about the potential for power outages and are warning people to take precautions and, if possible, postpone travel.

KANSAS CITY, Mo. – A large swath of the United States is braced for a dangerous combination of sub-zero temperatures, howling winds and blizzard conditions, expected to disrupt the plans of millions of travelers. holiday schedule.

Weather forecasters said the cold spell began to hit the Pacific Northwest on Tuesday morning, and is expected to move north of the Rockies, then cover the Plains in conditions deep freeze and blanketed the Midwest with heavy snowfall. By Friday, the arctic front is forecast to spread bone-chilling cold as far south as Florida.

Authorities around the country are worried about the potential for power outages and are warning people to take precautions to protect the elderly, homeless and livestock – and if possible, postpone travel.

The northernmost regions of the US could see winds as cold as 70 degrees below zero (minus 57 degrees Celsius) – cold enough to cause frostbite on open skin in just a few minutes.

Even warm-weather states are bracing for the worst. Texas officials are hoping to avoid a repeat of the February 2021 hurricane that left millions without power, some for several days. Temperatures are expected to drop to near freezing levels as far south as central Florida over the weekend.

According to the National Weather Service, the heaviest snowfall is expected in Idaho, Montana and Wyoming, and cold winds will blow violently across the central region of the country.

“I wouldn’t be surprised if there were a lot of wind delays and a lot of snow delays as well,” said Bob Oravec, principal forecaster for the National Weather Service in College Park, Maryland.

Parts of Canada experienced the effects on Tuesday, when all flights at the airport in Vancouver were temporarily halted because of wind and snow. And in Seattle, a combination of snow, rain and low visibility caused nearly 200 flights to be canceled at Seattle-Tacoma International Airport. Greyhound cancels bus service between Seattle and Spokane, Washington.

In Oregon, one person died Tuesday after a pickup truck collided with an SUV. Police said a thin layer of ice on the highway could be a contributing factor.

Nearly 113 million Americans are expected to travel 50 miles or more from home this holiday season, up 4% from last year but still well below the record 119 million in 2019, according to AAA. Most plan to travel by car; about 6% planned to fly.

Several inches of snow are expected from Chicago through the Great Lakes region on Friday. Snow is also forecast in the lower Midwest. As the storm approached, airlines Delta, American, United and Southwest said they were waiving change fees for those traveling through affected airports.

Karina Jones’ family raises about 400 cattle north of central Nebraska near Broken Bow, where winds as cold as 50 degrees Celsius (minus 46 degrees Celsius) are expected on Thursday and Friday mornings. Nebraska herdsmen, she said, are “an enthusiastic bunch,” but the bitter cold is harsh.

“Raders stay up all night praying that you’ve done everything you can for your herd,” says Jones.

In Kansas, where up to 4 inches of snow is expected to be accompanied by wind chills down to minus 40 degrees Celsius, Shawn Tiffany runs three cattle ranches with a total of about 35,000 cattle. cattle. He worries about keeping 40 employees safe and warm.

“Every conversation I’ve had over the past four days has included ‘Are you prepared and are you ready?’ Everyone is very serious,” said Tiffany.

In Texas, where temperatures are expected to drop to around 11 degrees (minus 12 degrees Celsius), the state’s power grid will be put to the test once again.

A historic freeze in February 2021 led to one of the largest blackouts in US history, leaving 4 million customers in Texas without power and leaving hundreds dead.

The Electrical Reliability Council of Texas, the state’s grid regulator, said last week it expected enough power to meet the electricity demand expected during this week’s winter boom. . The council says it has made reforms to increase reliability, including bringing more generations online sooner if needed and purchasing more stored energy.

In Jackson, Mississippi, where dangerously cold weather is forecast for the weekend, all eyes are on the capital city’s failing water supply system. A cold snap in 2021 has left tens of thousands of people without running water after pipes froze, and Chokwe Mayor Antar Lumumba said on Monday that the water distribution system remained a “hole”. big”.

Deep freezing would be especially dangerous for the homeless. In Kansas City, Missouri, emergency shelters are open to anyone in need of warmth, food or safety. However, organizers warn that possibility is limited overnight.

“We will be involved as much as possible,” said Karl Ploeger, director of development for City Union Mission, a Christian nonprofit.

If shelters are overworked at night, the mission will work with other organizations to try to find alternatives for everyone.

Biden to Back African Union Becoming a Permanent G-20 Member

The Inflation Pain You Don't See