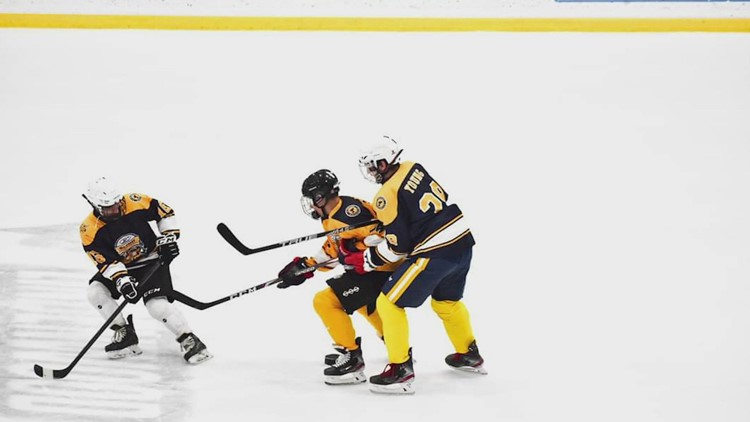 For the second year in a row, Adam Young was selected to play with the National Blind Hockey Team.

KENT, Wash. — Adam Young is a kennel technician at a Des Moines veterinary clinic and said he balances the 12-hour days with his hobby-turned-passion.

Young said he moved to Kent to be close to the ice.

“Growing up in Michigan, I’ve always been such a huge hockey fan. So when I moved to the Seattle area, I knew I wanted to live somewhere that I could skate full time,” Young said.

He trains several days a week at the Kent Valley Ice Center. Young is a defensive back for his club hockey team and said he likes defense because it keeps the game ahead of him.

This is important for a blind hockey player.

Young said he always wanted to be a hockey player but realized in high school that his eyesight would limit him because he had been visually impaired since birth.

“I can’t see anything in my left eye and very little in my right eye. I have tunnel vision with a lack of depth perception, so I kind of see everything through a pinhole,” he said.

Young said blind hockey is the perfect form of sport for him as the rules are the same but the puck is built specifically for blind people.

The larger size makes it more visible to those with some vision, and the noise is key for gamers with little or no vision.

“It’s been really exciting to see his growth as a player and as a teammate and ambassador for blind hockey,” DeFlorio said.

He said passing the torch to a teammate like Adam is important to the growth of the sport. For the second year in a row, Young was selected to try for the National Blind Hockey Team, and DeFlorio said it was sheer talent that earned him the honor.

“I had vision for 30+ years and played hockey all the time, but Adam doesn’t have any of that prior knowledge and had to learn the sport without being able to see and that’s amazing.”

Young said playing hockey at a high level is exciting and expensive. The hockey pucks cost about $200 each and are used only once. The equipment and travel costs add up, and Young said he couldn’t have made it all work without generous donations.

A friend set up GoFundMe and raised over $4,000. Unfortunately, the training camp has been postponed due to the COVID-19 pandemic, so Young is excited to be invited this summer and is once again raising funds.