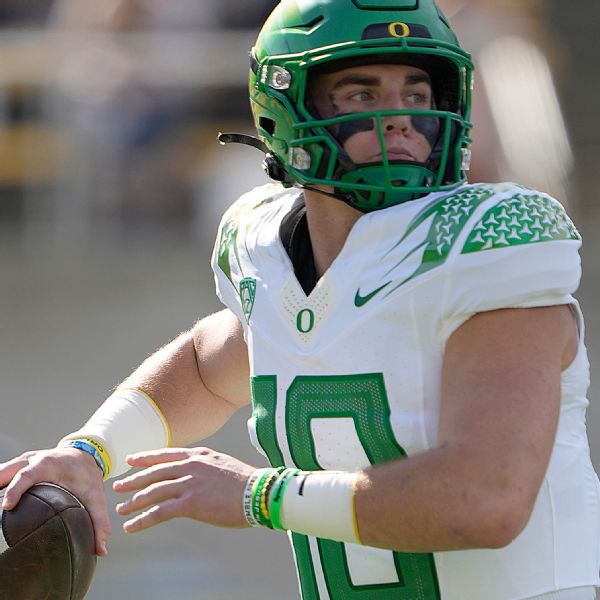 BERKELEY, Calif. — Oregon extended its winning streak to seven games and quarterback Bo Nix’s performance got him in the Ducks’ 42-24 win over Cal.

The Auburn transfer became only the third FBS quarterback in the past 10 years to throw at least 400 yards (412), throw three touchdowns and score three points in the same game, surpassing Ohio State’s Dwayne Haskins (2018) and Brock of Iowa joined Purdi (2019). Oregon added 174 yards on the ground to pack 586 yards.

Despite the big numbers, No. 8 Oregon more.

“Bo did a good job today but I think if you ask Bo now he would say he can do better,” said Oregon coach Dan Lanning. “And I think our whole team probably feels that way. Bo has been very consistent all year and is a really good player. I think after his performance he will say that he wants to do better than him.”

Lanning was right. Nothing repeated the feeling.

“I think we played pretty well offensively, but we only shot each other in the foot a couple of times,” said Nix. “I didn’t do my best today but luckily the guys around me played really well to get some more points.”

Nix completed 27 of 35 passes and rushed for 59 yards on 12 carries. He was picked up twice, but one came on an Ave Mary to end the first half and the other bounced off its intended receiver.

The sense of frustration stemmed from the Ducks’ slow start – they remained scoreless in the first quarter – and three trips to the red zone that ended without points (one interception, two turnovers).

Regardless, the win marks Oregon’s seventh straight win since the season opened with a loss to Georgia, in which they have scored at least 41 points in every game. The Ducks’ 42 points against Cal was the fewest they have scored in a Pac-12 game this year, though their performance has been consistent throughout.

The Ducks travel to Colorado next week before ending the season with a difficult three-game stretch that includes Washington, Utah and Oregon State.