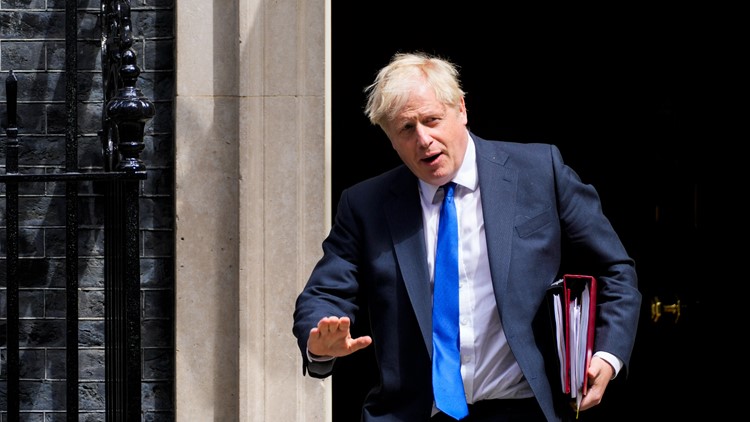 He immediately resigned as leader of his Conservative Party but plans to remain prime minister while the leadership contest takes place.

LONDON, UK – British Prime Minister Boris Johnson resigned on Thursday, acknowledging it was “clearly the will” of his party that he should go.

He immediately resigned as leader of his Conservative Party but plans to remain prime minister while the leadership contest takes place. He said he had appointed a new cabinet after a spate of resignations, but many are now calling on him.

It’s a humiliating defeat for Johnson, who managed to lead Britain out of the European Union and is credited with launching one of the world’s most successful mass vaccination campaigns to fight COVID-19.

The announcement came after the recent ethics scandal surrounding Johnson’s leadership resulted in about 50 top lawmakers leaving government and leaving him unable to govern.

Outside 10 Downing Street, Johnson said he was “immensely proud of the achievements of this government”, from Brexit to navigating the country through the pandemic to leading the West in opposing the Russian invasion of Ukraine.

But he acknowledged that “in politics, nobody is remotely indispensable”.

Johnson had clung to power for two days, defiantly telling lawmakers on Wednesday that he had a “colossal mandate” from voters and intended to proceed with the affairs of government.

But he was defeated on Thursday morning after two other members of his cabinet resigned and one of his closest allies, Chief Financial Officer Nadhim Zahawi, publicly told him to step down for the good of the country.

The internal election to choose a new Conservative Party leader, who will also be the next Prime Minister, is expected to take place later this summer.

Zahawi, who was promoted earlier this week as Johnson tried to shore up his cabinet, said he and a group of colleagues privately raised their concerns with the prime minister on Wednesday and decided to go public after Johnson’s advice to step down had ignored.

“I am heartbroken that he has not listened and is now undermining the incredible achievements of this administration,” Zahawi said in a letter published on Twitter. “But the country deserves a government that is not only stable but also acts with integrity.”

Thursday morning’s resignations meant that 50 cabinet secretaries, ministers and junior officials had left the government in two days, often chastising the prime minister for his lack of integrity. With more than 20 vacancies, the crisis had stalled the work of some parliamentary committees with no ministers available to speak on behalf of the government.

Johnson led Britain through Brexit and the COVID-19 pandemic, winning a major election victory in 2019. But the perpetually wrinkled leader, known for greeting critics with bombast and fanfare, has also been dogged by criticism that he is willing to bend, and sometimes break. the rules to achieve his goals.

Johnson, 58, managed to stay in power for almost three years despite allegations that he was too close to party donors, shielding supporters from allegations of bullying and corruption and misleading parliament about government parties flouting the pandemic’s lockdown rules violated

Recent revelations that Johnson knew of sexual misconduct allegations against a Conservative lawmaker before promoting him to a senior government position proved one scandal too many.

The crisis began when Chris Pincher resigned as deputy chief whipper after he was accused of groping two men at a private club. This sparked a flurry of reports of previous allegations against Pincher.

Johnson tried to stave off criticism by making statements about what he knew and when he knew it, but that only underscored concerns the Prime Minister could not be trusted.

Javid struck a chord with many lawmakers when he said Johnson’s actions threatened to undermine the integrity of the Conservative Party and the UK government.

“At some point we have to realize that enough is enough,” he said in the House of Commons on Wednesday. “I think that point is now.”

How to stop fighting on vacation