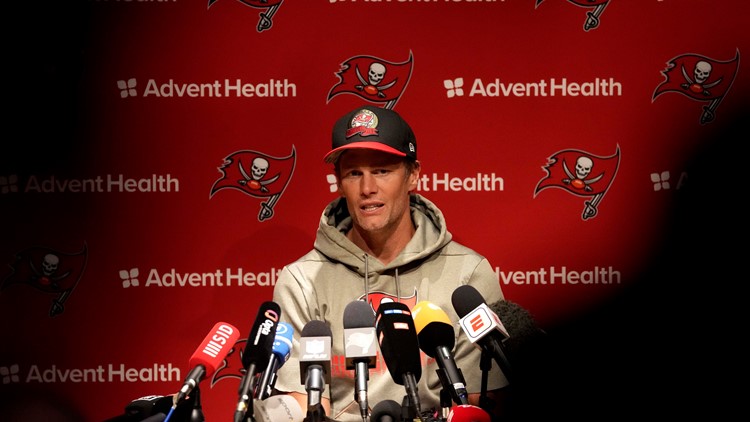 Tom Brady got a full dose of Germany on Friday when he was presented with a pair of Bavarian lederhosen before being questioned about his personal life.

MUNICH (AP) – Tom Brady got a full dose of Germany on Friday when he was presented with a pair of Bavarian lederhosen before being questioned about his personal life.

The Tampa Bay Buccaneers quarterback responded that he had no regrets about returning for another season.

“Zero, no, definitely not,” Brady said at a crowded press conference at a Bayern Munich facility ahead of Sunday’s game against the Seattle Seahawks. “I think I came back because I felt like I wanted to compete. I spoke to the team about it and they were thrilled to have me back.”

Brady and Gisele Bundchen recently announced that their divorce is final.

Brady was asked by a German reporter about challenges on and off the field and if he had any regrets about not retiring.

“I don’t really regret things like that,” said the seven-time Super Bowl champion. “I think if I commit to it, I mean it and I’m doing my best and trying to give everything I can to take advantage of this special opportunity.”

Another local reporter asked how he deals with personal and professional challenges.

“You do the best you can every day and yes I’ve tried to be the best I can be for my family and my teammates,” said the 45-year-old. “We all have our challenges. Life is a challenge for everyone. We just do our best.”

Brady later explained that he loves the day-to-day work and victories like last week’s 16-13 comeback win over the Los Angeles Rams. He’s been able to play for so long, he said, “because it never really felt like work.”

“It’s hard for me to believe I’m still playing at this age, but I enjoy it and I love to compete,” said Brady. “Certainly games like last week are reasons we do it because there’s a thrill of victory that’s probably hard to replicate at home on Xbox or something.”

Speaking to Brady, coach Todd Bowles marveled at the size of the crowd: “I’m sure they didn’t come to see me.”

Earlier in Brady’s session, an editor from German broadcaster ProSieben surprised the quarterback – and everyone else – as he rose from the front row to present Brady with a pair of lederhosen.

Back in Tampa, we never give Tom Brady leather pants in the middle of a press conference. Germany takes it to another level. pic.twitter.com/gb6OaeL7df

“This looks good,” a gracious Brady said to Robert Salkowsky, who explained that it was made specifically for Brady with Bucs and TB12 logos.

“We are very proud to have you here in Munich and we want you to always have fond memories of Munich,” said Salkowsky.

Brady held up the leather shorts – shorts with suspenders – and said, “How would that look going to the game in those?”

When a team assistant took it away, Brady said of one of his backup quarterbacks, “Kyle Trask is gonna wear that out there.”

The Bucs’ offense has struggled all season, so Brady is hoping they can start building some momentum.

“This is a very important game for us. After that we have a bye week. It gives you a chance to assess where you stand and I would much rather put it a 5-5 than a 4-6,” he said . “We have to win this game and that will take care of it, but Seattle will challenge us. They create a lot of sacks and turnover.”

The Seahawks (6-3) came to Bavaria on a four-game winning streak and at the top of the NFC West.

“Playing well is playing well, it doesn’t matter where you are and in which stadium, in which country,” he said. “For us, it depends on how well we do our job.”

The FC Bayern Munich coach and some players met with the Seahawks at Friday practice at the football club’s first-team campus.

Fast winger/left-back Alphonso Davies appears to have mentioned that he’s faster than Seahawks receiver DK Metcalf, but all of Canada will be delighted they didn’t line up and race. Davies is recovering from a thigh strain and hopes to be fully fit for the World Cup.

Bucs TE Cameron Brate (neck) was back a full participant in practice on Friday and was listed as questionable. Brate, who suffered a concussion earlier in the season, will be a game-day decision, Bowles said. Seahawks WR Marquise Goodwin (groin) is also in full training and is a question.

https://www.king5.com/article/sports/nfl/seahawks/brady-has-zero-remorse-about-return-is-gifted-lederhosen/281-527bdf9b-4e43-4a02-afe9-822ed80bbc5e Brady has ‘zero’ remorse about return, is gifted lederhosen

'I lost all hope.' More than $120K raised for men who had vehicles stolen in wild police chase in SoCal

The Republican Wipeout in Michigan

What Cristiano Ronaldo can expect in Saudi Arabia with Al-Nassr