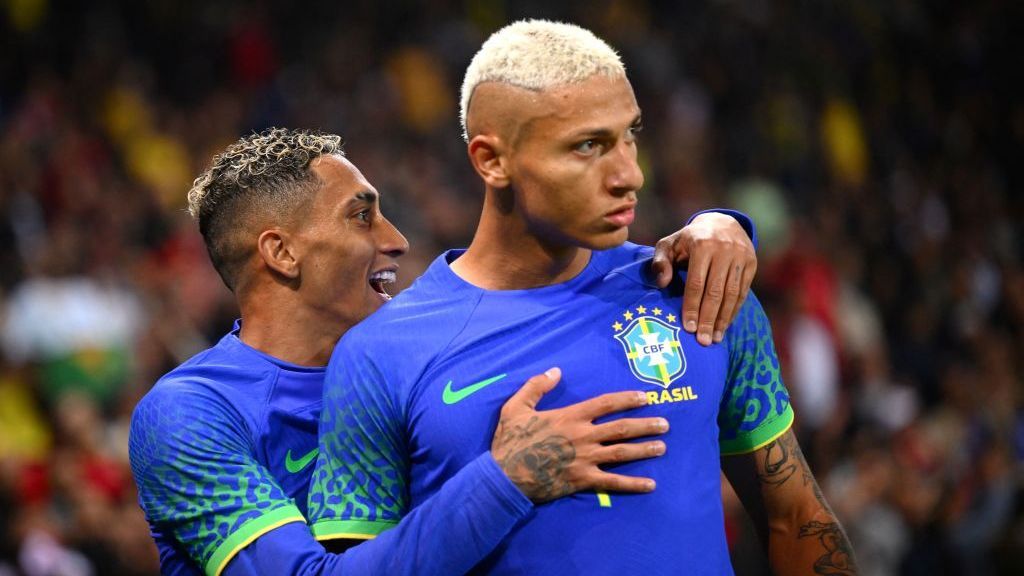 A banana was thrown from the crowd at Brazilian players celebrating a goal in a friendly against Tunisia in Paris on Tuesday.

Tottenham Hotspur striker Richarlison, who is black, had just scored the team’s second goal in the 5-1 win at Parc des Princes when the banana was thrown at him and the other celebrating Brazilians near one of the corner flags. What appeared to be a water bottle and another object were also thrown at them.

Brazil used the game to take a stand against racism, with the players posing before kick-off in front of a sign that read: “Without our black players, we wouldn’t have stars on our kit” – a nod to the five stars above the team crest, representing her five world titles.

The Brazilian Football Federation condemned the incident and reiterated his stance on “the fight against racism”, while the federation president said he was shocked by what had happened.

“The punishment for these acts must be more severe,” said Ednaldo Rodrigues.

Richarlison’s teammate Vinicius Junior, who plays for Real Madrid, was also subjected to racism from Atletico Madrid fans ahead of the teams’ derby game on September 18.

According to Brazilian media, stadium security personnel tried unsuccessfully to identify the person who threw the banana onto the pitch.

The game was also briefly stopped twice as spectators were asked not to point laser pens at Brazilian players.

The game was Brazil’s final warm-up before traveling to Qatar for the World Cup, where they meet Serbia, Cameroon and Switzerland in Group G.

Information from The Associated Press was used in this story.

Elon Musk and Twitter are now fighting about Signal messages

Big Ten will move on from ESPN in TV deal negotiations

Lockett breaks bone in hand as Seahawks battered by Niners

Dodgers vs. Guardians: How to watch; start times, schedule