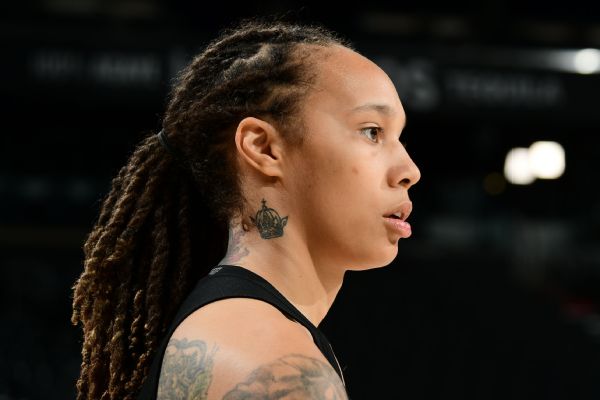 Two members of Brittney Griner’s Russian club team appeared as character witnesses at her trial on Thursday, telling the judge she was a model player and citizen throughout her six seasons in Russia.

UMMC Ekaterinburg teammate Evgeniya Belyakova and the team’s general manager Maxim Ryabkov spoke during the brief afternoon court session, while Griner sat in the defendants’ cage not far away. Her appearance is believed to be the first face-to-face contact Griner has had with anyone she knows — other than the Russian lawyers hired for her case — since she was arrested on February 17 and charged with attempted drug smuggling into the country .

“Our task today was to tell the court about her qualities as an athlete and as a person – to tell how she played a huge role in the success of the Yekaterinburg club and Russian women’s basketball as a whole,” Ryabkov told reporters from outside the team courthouse. “Today is the first day we’ve seen our basketball player since February. Thank God she’s fine, she looks fine.”

Belyakova said: “I can say that Brittney has always been a very good teammate, so my role here is just to be with her, to support her. We miss her very much. We miss her energy. I was very happy to see her and I hope that this process will be completed soon and with a positive outcome.”

Griner has already pleaded guilty, telling the judge last week that she accidentally brought vape cartridges containing hash oil into the country and had no intention of breaking the law. In Russian criminal trials, however, the trial continues even after a guilty plea, as the judge reads the case into the prosecutor’s file.

She is expected back in court on Friday when the proceedings could be less conducive to her. The judge is expected to interrogate Griner directly, a common practice in Russian trials.

Tom Firestone, the former resident legal counsel at the US Embassy in Moscow, said he expects Griner to repeat what she said when she pleaded last week. Firestone said prosecutors and defense attorneys are allowed to ask “clarifying questions” during the interrogation.

Her lawyers have said they expect the case to last at least until early August, and defense attorney Maria Blagovolina told Reuters she was pleased with how Thursday’s session went.

“It was an extremely emotional day for Brittney, who was touched by the arrival of the Club Director, Head Doctor and her teammate, who described our client in extremely positive terms, both personally and professionally,” said Blagovolina.

US officials and experts have said they view the trial as “drama” that could only have ended in a guilty verdict, as Russia seeks to barter them for either a prisoner swap or some other concession from the United States. Sources close to Griner have described their guilty plea as a tactic, knowing that Russia would require an admission of guilt before agreeing to a negotiated release.

Russian officials have fumed at American demands for Griner’s release, saying their legal case must be completed before any discussions can take place.

Asked whether Griner could be swapped out for a Russian jailed in the US, Deputy Foreign Minister Sergei Ryabkov, the senior Russian diplomat, noted that until the end of their trial, “there are no formal or procedural grounds to discuss any further steps.” speak. “

Ryabkov warned that US criticism, including describing Griner as wrongly imprisoned and derogatory comments about Russia’s judicial system, “makes it difficult to engage in a detailed discussion of a possible replacement.”

Sources have said that former US Ambassador to the United Nations and former New Mexico Governor Bill Richardson has been negotiating their release in parallel with the US State Department’s Office of the President’s Special Envoy for Hostage Affairs.

As expansion race heats up, NWSL faces tough questions about its future with Utah expected to join in 2024

Lakers planning to play Russell Westbrook off the bench