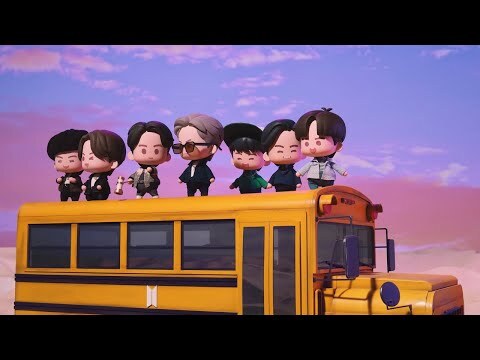 BTS proved the best was yet to come on Sunday by releasing a second music video for the lead single from their new album.

The latest music video for Yet to Come (The Most Beautiful Moment) features cute animated versions of the seven members of the South Korean boy band: V, Suga, Jin, Jungkook, RM, Jimin and J-Hope. The first music video for the popular track was released less than two weeks ago.

In the video, the cartoon musicians wander through a desert landscape before happily sliding and falling down some sand dunes. The opening scene seems to be directly inspired by its live-action predecessor, which also featured the band members singing in the desert.

The new video deviates in Act Two, in which the cartoon septet boards a friendly humpback whale to a tropical paradise, where they fly airplanes, read books, play the piano, snuggle cats, paint landscapes and go fishing. Together, the two music videos for “Yet to Come” have already amassed more than 103 million views on YouTube.

According to Billboard, Sunday’s video also serves as a promotion for the pop group’s upcoming video game BTS Island: In the SEOM, which is touted as a virtual space “for healing and relaxation.” The game is scheduled for release on June 28th.

The lovable promo comes shortly after BTS released its three-disc anthology album Proof, which features a slew of greatest hits, remastered tracks, unreleased demos and new songs – including Yet to Come.

Last week, the stars of the popular K-pop group announced plans to “spend some time apart” and embark on solo ventures to show fans who they are as individual artists.

But a rep for the band was quick to clarify that BTS is “not on hiatus” and will “remain active” while the singers “explore some solo projects” and continue to entertain their fans “in various formats.”

https://www.latimes.com/entertainment-arts/music/story/2022-06-20/bts-yet-to-come-new-music-video-animated-cartoon BTS’ new music video for ‘Yet to Come’ is too cute to handle

Forget iPhone SE 3, this Redmi K50i could be the packed midrange phone for you ► Latest News

Industria Review – A Not So Well-Oiled Machine