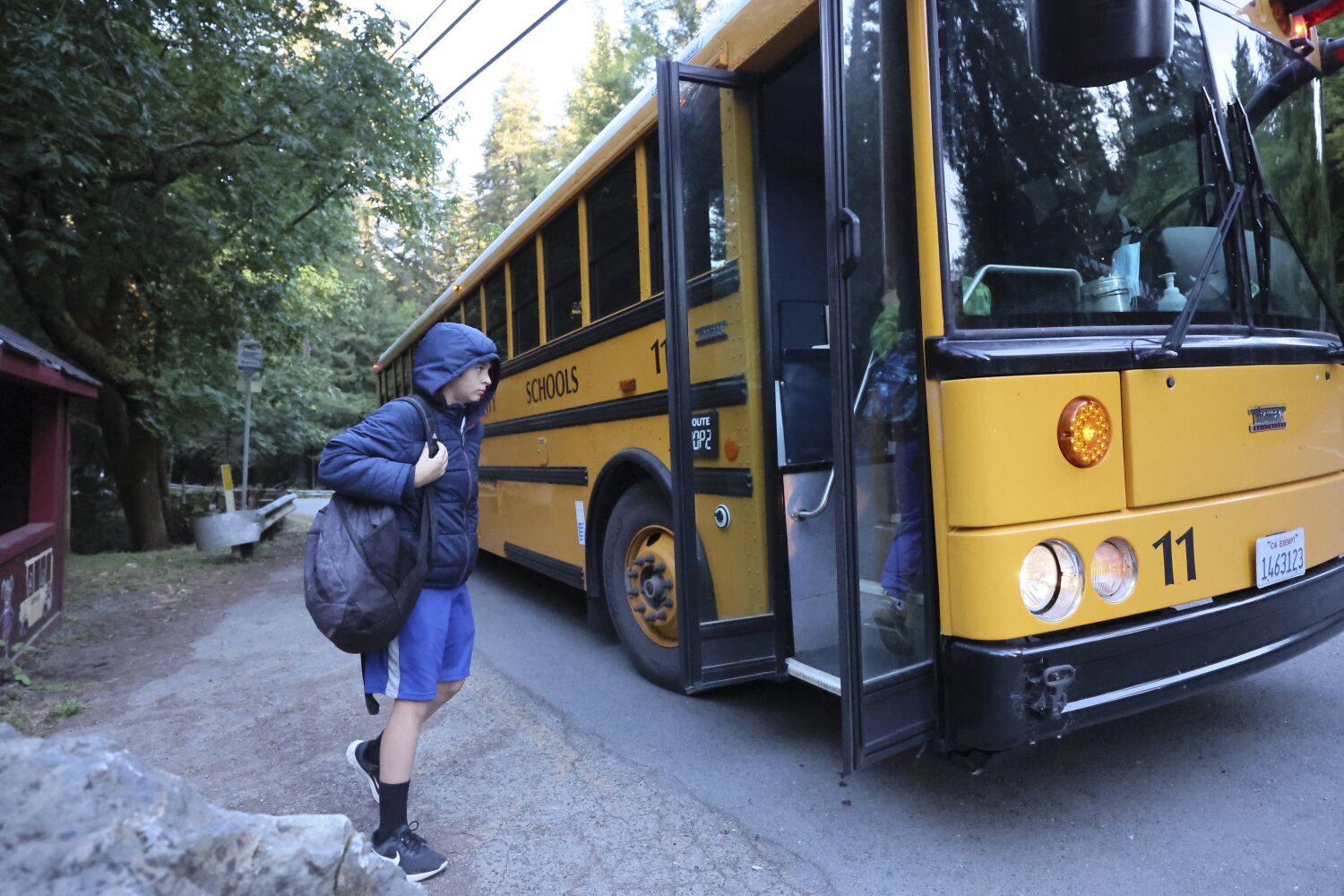 For conservatives running for school boards in California, any dream of a “red wave” proved dud as Republican candidates, including a member of a far-right group, lost in most races statewide.

But even a few unsuccessful campaigns garnered enough votes to reinforce an already keen sense of political polarization once absent from local school board races. And conservative groups believe they’ve found a playbook to win more.

Jeffrey “Erik” Perrine, a member of the extremist group Proud Boys, lost his bid for a seat on the San Juan Unified School Board. But more than 2,600 people in Sacramento County voted for him — 18% of the vote in his district, according to the latest election update.

In Orange County, Kira Davis, editor-in-chief of conservative political blog Red State, is poised to lose in the race for a seat on the Capistrano Unified school board, but has garnered more than 9,000 votes, or about 40%.

Davis, who has railed against race education and called transgender people “a social disease,” went to Fox News last week calling for “a determined and concerted effort to take over America’s school boards.”

Conservative groups like the American Council and Moms for Liberty recruited and endorsed dozens of candidates across the state and helped bankroll victories in Placer, Sacramento and San Diego counties, turning red parts of California even redder with school board races. Hoping to capitalize on the ongoing frustrations of COVID-19, they have adopted a broad “parental rights” motto that, on the face of it, seems to appeal to even Democratic voters.

“It’s short-sighted to say, well, they didn’t win. What that tells us is still chilling,” said Tracie Stafford, chairwoman of the Sacramento County Democratic Party, which is urging voters to be mindful of once undisputed races. “If they did so well this time, they will regroup and realign and come up with a strategy that could actually bring them a lot closer.”

Already preparing for the next election, the American Council, formed in 2020 with the aim of recruiting political candidates with a “biblical worldview,” is viewing California’s nearly 1,000 school boards as a path to political power in a place where no Republican has won a race statewide in 16 years.

The majority of the $426,000 raised by the organization went to California school board candidates who found these races cheaper than higher office, according to Tanner Di Bella, president and founder.

Di Bella said he believes there is a way for conservatives to win local races, even in a largely Democratic state like California.

“If our desire as an organization is to impact the culture, to impact the things that we see in California that we don’t like,” Di Bella said. “This has a much more direct and immediate impact on families and children than talking about 2024 in the White House.”

When asked how parents of LGBTQ children can feel safe in districts policed ​​by school boards whose members are supported by groups openly critical of policies protecting them, Di Bella, who has no children, pointed to anti-discrimination laws , but said authorities need conservatives to be “more well-rounded”.

“It is not my desire to choose individuals who would discriminate against people based on these characteristics, but I believe there is a biblical model for human sexuality,” he said.

But a conservative push for school boards could also mean race gets more attention than ever from the left.

As lists of conservative candidates ran in Contra Costa County, residents of Rossmoor, a Walnut Creek retirement community of about 10,000, got involved, even though most of their children had aged out of K-12 schools years ago.

“For many, many years, no one cared about school board races. We slept at the wheel thinking this would never happen here, but it is happening here and it will continue to happen and we must continue to fight it,” said Susan Hildreth, president of the Democrats of Rossmoor group. “I think we really woke up.”

Nick Bennett, president of the Roseville Junction Democratic Club, said race hasn’t been the school board’s top priority in the past, but he sees more commitment on both sides in this election. Even with an influx of San Francisco Bay Area residents, it’s no surprise Republicans are winning in Placer County, he said, but there is “far more coordination” and “increasing politicization.”

“Growing up in Roseville, I’ve never seen so many signs supporting school board candidates,” he said, adding that newly elected school board members are supported by organizations that support banning books and “represent views that support LGBTQ harm students. ”

Even small school board races are on the radar of gay rights groups like Equality California. Spokesman Samuel Garrett-Pate said the organization plans to become more involved in 2024.

School boards have a critical duty to ensure compliance with California laws regarding comprehensive sex education and transgender rights, he said.

“The problem is that all these bills are implemented at the local level. They are only as effective as implemented by school authorities,” he said. “We’re dealing with a number of candidates who are essentially promising to break California law to persecute LGBTQ students. All of these districts have LGBTQ students; Children don’t decide where they grow up.”

Conservatives failed to secure seats in affluent Contra Costa County, where registered Democrats vastly outnumber Republicans, but the race had a grip on the East Bay Area, in part because of a $250 donation from Ginni Thomas, the judge’s wife of the Supreme Court, Clarence Thomas and the issue 6 Jan Riot investigations regarding false electoral claims.

Woolway, a registered libertarian and parent, denied that his campaign was part of a larger effort to “take over” school boards. He lamented that his affiliation with Trump, whom he said he would not support in 2024, overshadowed the local race.

“This was literally about making schools better,” Woolway said. “I never really understood what a school board is or thought about it before COVID shed light on the lack of leadership.”

Despite widespread losses, the California GOP celebrated victories in Republican strongholds and said it will “absolutely continue” its Parent Revolt program, which helps train candidates to run for school board candidates and “gives parents a voice.”

“Not only are these recruitment efforts a boon to California kids as candidates run to fix our broken schools, they also serve as an opportunity to build a roster of leaders who will shape policy at every level for years to come,” said Ellie Hockenbury, spokesman for the California Republican Party.

Tanya Kravchuk, a registered Republican and mother of four, secured a seat on the San Juan Unified School Board and promoted parents’ “guaranteed legal rights” to participate in the education of students.

During the campaign, Kravchuk said her constituents identified a new law to protect out-of-state transgender students from prosecution as a top priority. Several voters called the medical treatment recommended by doctors for trans youth “child mutilation,” she said.

“That surprised me. My particular district is very old, so the fact that people cared about — not having safe classrooms or the fact that our kids can’t read or do math at grade level — I think it reflects people’s concerns,” he said you.

Other Conservative-backed winners include Jean Pagnone, a firearms instructor and president of the local Republican Women’s Association, and Jonathan Zachreson, who led a parenting movement against COVID-19 shutdowns and vaccination mandates.

Josh Hoover, a member of the Folsom Cordova Unified school board, was running for state assembly and, according to recent results, came out on top in a close contest with incumbent Ken Cooley (D-Rancho Cordova).

He claims that the interests of school boards are not about the power of political parties, but about giving parents more rights.

“I think this message that we need to put parents first really resonates,” Hoover said. “I don’t think any of them did it to serve on school boards for the Republican Party; They did it to reclaim the blackboards for their families.”

Julie Marsh, faculty director at nonpartisan research firm Policy Analysis of California Education, said that while large counties like Los Angeles Unified have long raised national political funds, the shift in interest in smaller races is new. The issues in many public school board debates have increasingly trickled down to larger debate platforms, she said.

“Extreme discourse about critical race theory and parental rights and the teaching of racism and gender identity, all those things that we’ve also heard in the races for positions on the ballot for state-level positions,” she said. “I don’t think it’s over. I think it’s part of the playbook.”

Southwest Airlines chaos drags on at LAX and around the country