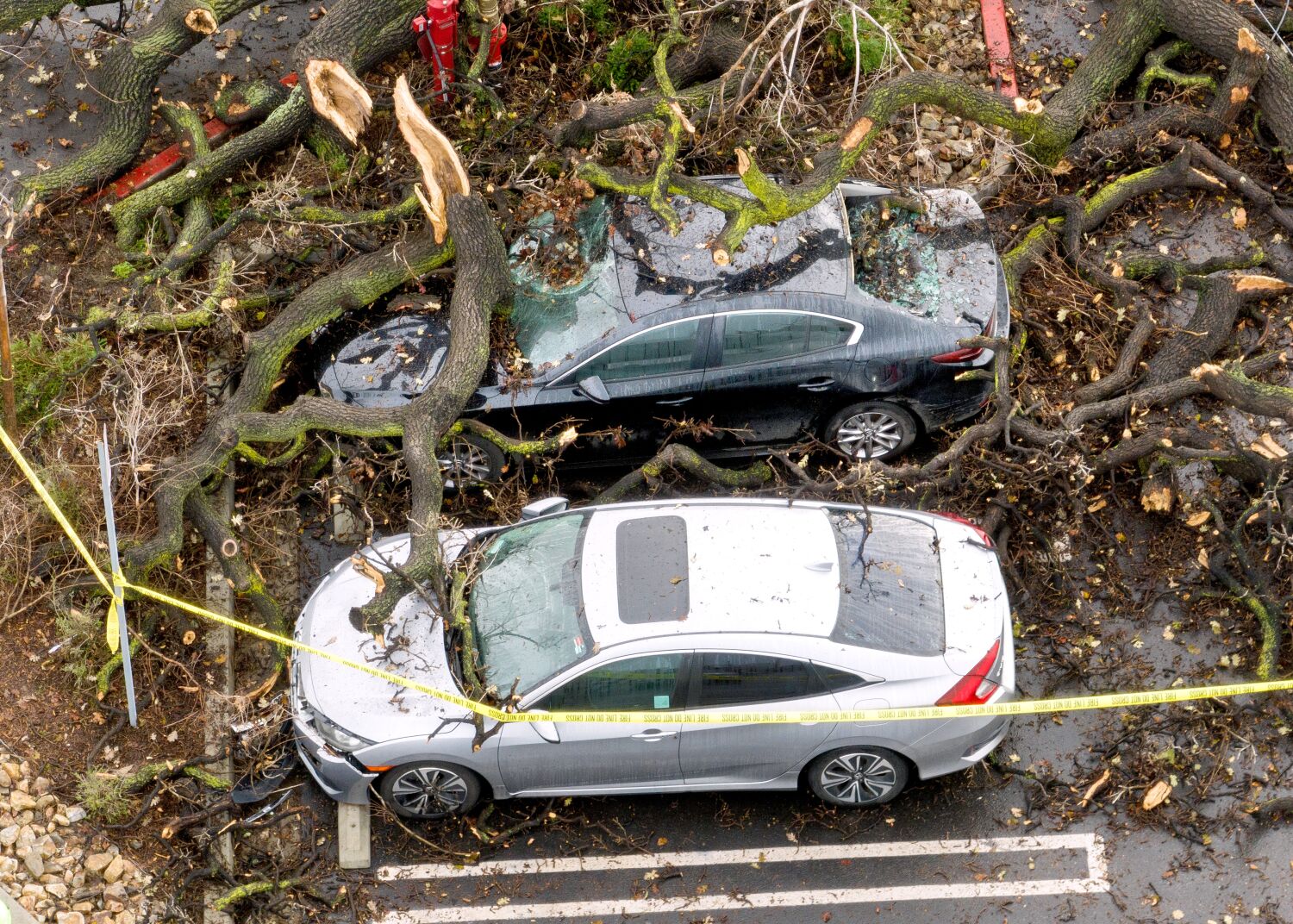 A pier in Santa Cruz is split in half. Extensive flooding in Soquel Village, Capitola and Planada. Vital bridges badly damaged or closed. More than 500 mudslides have been reported across California in recent weeks, including some that damaged homes and cars in LA’s hilltop communities.

The atmospheric river storms that battered California for weeks caused “extensive” damage to as many as 40 of the state’s 58 counties, and total repairs could cost as much as $1 billion, authorities said.

The estimated cost is likely to change as teams of local, state and federal officials began Saturday’s damage assessment that is expected to take several weeks, according to Brian Ferguson, a spokesman for the governor’s office of emergency services.

President Biden on Saturday approved an expedited disaster declaration ordering the delivery of federal assistance to recovery efforts in storm-hit areas of California. All 58 counties have access to hazard reduction assistance, which means federal assistance can be awarded to state and local governments and certain nonprofit organizations to reduce risk to life and property.

State support reimburses local and state governments for 75% of the cost of repairing infrastructure and other necessities. According to Ferguson, it will also provide support for individualized programs based on residents’ needs and insurance coverage. Local governments in the worst-damaged areas could only cover 8.5% of the cost.

In Merced, Sacramento, and Santa Cruz counties, residents have access to assistance with replacing or repairing damaged property and other services; Nonprofit organizations in these counties receive federal assistance to conduct emergency work and debris removal.

The storms, which began after Christmas and continued through this week, brought rain across the state, killing at least 20 people, causing evacuations and flooding of rivers and roads.

The storms have caused “significant” damage to Merced, Sacramento and Santa Cruz counties, as well as Monterey, Santa Barbara, Ventura and San Benito along the Central Coast, Ferguson said, adding there will be “significant” costs to 30 to 40 counties .

On Monday, the US Geological Survey had mapped more than 500 landslides statewide since December 30, piles of dirt and rocks blocking roads and power outages due to downed trees.

In Monterey County, the gonzales river bridge was weakened by flooding and was too damaged to be used on Tuesday, officials said. The bridge was blocked with cement rails; it will take two to three weeks before the next steps for the repair can be determined. In addition, a rock fall was covered over the weekend Parts of Autobahn 1 in Big Sur, and the roadway showed “significant instability” after the storms, according to Caltrans.

In Ventura County, piles of rock and mud on streets reached heights of up to 40 feet, isolating residents and blocking traffic, according to the sheriff’s office. Authorities said it could take up to three weeks to clear a single-lane access road and up to six months to make repairs.

If additional counties show significant damage from the storms, they could be added to the disaster declaration, Ferguson said.

“There are thresholds that we have to meet with the Federal Emergency Management Agency to be able to access it,” he added. “Our goal is [to] Maximize the federal support we can bring to communities.

In Monterey County alone, a preliminary estimate of damage was $80 million, according to spokesman Nicholas Pasculli. These costs would include debris removal, emergency response and equipment, and repairs to public utilities, roads, bridges, water control facilities, public buildings, and parks and recreation facilities.

Pasculli said he expects that number to rise to at least $100 million on Tuesday once the county receives the latest information.

Monterey County’s agricultural industry suffered $40 million to $50 million in losses, and 25,000 to 35,000 acres of farmland were “seriously” affected by flooding, Pasculli said. There were also losses of equipment, irrigation systems, well pumps, and crops.

There was at least $30 million to $50 million in infrastructure damage across the county, including roads, bridges, and other buildings.

In Sacramento County, repairs could cost more than $123.8 million, but that number is expected to “fall” after officers complete their inspections, according to spokeswoman Samantha Mott. As of Tuesday, the storms had caused about $668,000 in damage to private property, including homes, businesses and outbuildings, Mott said.

“This number will [go] exponentially,” he said. “It’s a fraction of what the final figure will be.”

Hoppin said the number doesn’t include private property, Caltrans infrastructure, or state roads. The damage assessment, he said, is underway.

“When it’s raining every day, you can’t gauge things,” Hoppin said, noting that Tuesday was the first sunny day in weeks. “We have roads that are still evolving in terms of degradation.”

More than $30 million of public property was damaged in Ventura County, according to Patrick Maynard, director of the Sheriff’s Office of Emergency Services. More than 80 private properties have been affected, including two destroyed buildings, he said, adding that Ventura should have an updated damage assessment later this week.

Mike North, a spokesman for Merced County, did not have a damage assessment that is ongoing but said the agricultural sector was financially hardest hit.

“However, this has affected most sectors of our economy,” he added.

Another storm system is expected to fall into California from the Pacific Northwest this week, but will not result in significant rainfall, according to National Weather Service meteorologist David Sweet. The Bay Area is expected to get up to a half-inch of rain Wednesday, mostly in parts of Sonoma and Napa counties. The Los Angeles area could experience drizzle or light showers early Thursday.

“The ground is saturated, so additional precipitation would cause the water in the rivers to react very quickly, and there would be some hydrological problems as we are now very close to saturation,” he added.

Saturday’s storm set a rainfall record of 1.82 inches in downtown Los Angeles, beating the old record of 1.56 set in 1978, Sweet said. At Long Beach Airport it was 1.72 inches, beating the 1978 record of 1.48. Records were also broken in Camarillo and Paso Robles on Saturday.

So far this water year, which began October 1, downtown LA has received 13.01 inches of rain. The typical figure for this time of year is 5.67 inches.

“The storms we’ve had over the past few weeks have had an atmospheric flow for each and these storms tend to feed the West Coast [with] Most of the precipitation falls during the winter season,” Sweet said. “It was a bit unusual to see so many atmospheric fluxes lined up like this.”

He described the rainfall totals in Santa Barbara County as particularly impressive.

“On average, you would expect rainfall like this every 100 years,” Sweet said. “That doesn’t mean it’s another 100 years before another storm occurs, but normally, given average statistics for this area, you would only expect something like this to happen every 100 years.”

The storms improved drought conditions in California, eliminating the two worst categories, “extreme” and “extraordinary,” for most of the state, according to the US Drought Monitor. As of December 27, about 7.16% of California was considered to be affected by an “extraordinary” drought; As of January 10, none of the states were in this classification.

Despite the deluge, Sweet said if the state stayed dry for the rest of the water year like it was last year, hill vegetation could dry out, leading to a potentially dangerous wildfire season this summer.

“If we don’t rain from January to March, it can usually have a busy fire season,” he noted. “By July and August roll around, things have dried up.”