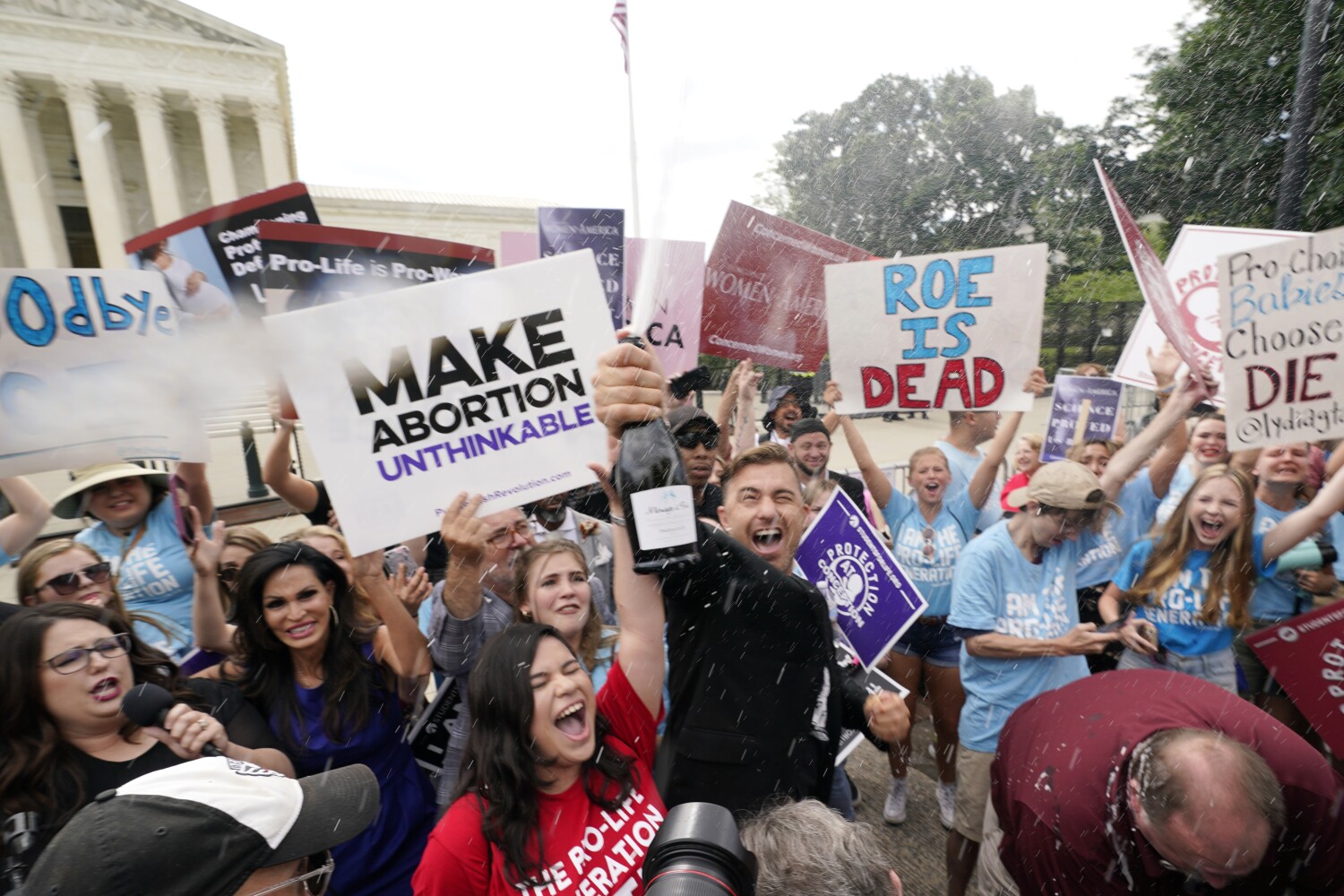 Like many Californians, 67-year-old Tamar Rosenthal woke Friday to news of the Supreme Court’s decision to overturn its landmark 1973 Roe vs. Wade ruling, clearing the way for states to outlaw abortion.

Her daughter, 26, was almost in tears, but the ruling reminded Rosenthal of being back in college, protesting for safe and legal abortions in the early 1970s when she was at the University of Oklahoma.

Rosenthal did the only thing she could think of: She put on her green T-shirt that read, “Bans off our bodies,” and drove to Planned Parenthood on Figueroa in Highland Park. Around lunchtime, she was the only person demonstrating outside.

“We’ve now lost a right that we’ve had for almost 50 years,” Rosenthal said. “I think people are shellshocked.”

Though abortion will remain protected and legal in California, residents and stakeholders across the Golden State expressed outrage and grief at the court’s decision. Some, including Gov. Gavin Newsom, vowed to fight back.

“The Supreme Court has stripped women of their liberty and let red states replace it with mandated birth,” Newsom said on Twitter. “This is an attack on American freedom.”

“The West Coast of the United States is going to stand strong,” they said. “We will fight like hell to protect your rights and your safety.”

But for some residents, the damage was already done. Brittany Eck of Long Beach said the overturning of Roe vs. Wade and the lack of support for childbearing women in general has made her question whether children should be a part of her future.

“Women’s rights are being stripped away, and kids are being shot in school. It’s extremely stressful,” said Eck, 34. “Why would I bring a child into the world at this point?”

Micol Hebron, 49, of Eagle Rock was trying to focus on her workday but found herself hopelessly distracted.

“I feel sick to my stomach,” Hebron said. “It baffles me that people can make laws about bodies that are not their own.”

Hebron and many others worried that the overturning of Roe vs. Wade could pave the way for the stripping away of other rights — especially those that affect the transgender and queer communities.

“It’s not just about abortion. The desire to oppress and control other people’s bodies is at the heart of this,” Hebron said.

The fears were echoed by Los Angeles City Council President Nury Martinez, who tweeted Friday morning that the ruling would be “deadly to women of color.”

“This Supreme Court is out of control, dangerous, and they’re coming for ALL of us — for women, for marriage equality, for privacy — for our civil rights,” Martinez said.

Ushma Upadhyay, an associate professor of obstetrics, gynecology and reproductive science at UC San Francisco, said it is likely that California will become a haven for those seeking essential healthcare services. But because many of the states that are likely to ban abortion are contiguous throughout the middle and southern parts of the country, she expressed concern that “many people won’t be able to overcome those cost and distance challenges.”

“People who are able to travel will be people who are the most economically advantaged — we know that historically from pre-Roe days,” she said. “It is people of color, low-income people … and adolescents I’m very concerned about. They won’t be able to find funding, find transportation, figure out how to make that multistate trip.”

According to a study Upadhyay co-wrote last year, there are 168 abortion-providing facilities in California, more than any other state. And because Arizona is one of the states likely to ban abortion, she said, it is likely that Southern California will become a destination for Arizonans traveling to obtain the service.

“There’s a potential for a surge,” she said. “It may lead to longer wait times, it may lead to greater challenges, even here, to access abortion.”

Legal experts similarly said there was cause for concern — particularly given the persistent and systemic inequities in access to healthcare.

“When you have a law that makes abortion unavailable, you have a law that makes unavailable a service upon which Black people disproportionately rely, so there’s a specific racial impact,” said Khiara M. Bridges, a professor of law at UC Berkeley. Bridges noted that Black people have not only higher rates of unintended pregnancy but also higher rates of maternal mortality and morbidity.

The Supreme Court’s decision, she said, marks a moment for California to “be on the offensive” by taking actions such as putting more money into building abortion clinics, especially to address the potential surge of people who could come to the state for care.

The state is making progress. This month, Senate President Pro Tem Toni Atkins introduced a constitutional amendment that would enshrine abortion protections in California’s state constitution. Senate Constitutional Amendment 10 would prohibit the state from denying or interfering with a person’s “reproductive freedom in their most intimate decisions, which includes their fundamental right to choose to have an abortion and their fundamental right to choose or refuse contraceptives,” according to the text of the amendment.

Atkins on Friday described “searing fury” at the court’s decision.

“With this ruling, the Supreme Court has turned its back on safety and equality,” she said in a statement. “But in California, those values remain firmly rooted. Here, pregnant individuals and their families will always be entitled to dignity, understanding and reproductive choice.”

Other California leaders shared Atkins’ sense of anger and outrage. L.A. Mayor Eric Garcetti described the court’s decision as “shameful” in a post on Twitter and called on Congress to act immediately to protect women and their access to healthcare.

Garcetti this month joined a coalition of mayors that vowed to protect women’s reproductive rights, including those from Long Beach, San Diego, San Jose, Oakland, Santa Ana and Sacramento as well as Madison, Wis., and Scranton, Pa.

“Our cities will continue to serve as places where women and all people can make their own reproductive decisions,” the coalition said.

L.A. mayoral frontrunner Rep. Karen Bass (D-Los Angeles) said in a tweet that “women should always have the right to control what happens to their own bodies — not the government.”

“As mayor, I will always do everything in my power to ensure that L.A. is a city where women have access to reproductive healthcare,” she said.

Billionaire developer Rick Caruso, who will face Bass in a November runoff, had come under scrutiny for telling a reporter in 2007 that he opposes abortion in most cases, but last month, he issued a defense of Roe after an early draft of the Supreme Court’s decision was leaked.

In a statement Friday, Caruso said he was “heartbroken and outraged by the Supreme Court’s decision” and vowed to do all he could to ensure women’s reproductive rights in Los Angeles.

Meanwhile, L.A. schools Supt. Alberto M. Carvalho told The Times he was “saddened, somewhat disappointed and angered” by the news while touring campuses.

“I believe any time we remove rights by a sheer vote that appears to be politically motivated is a step backwards for America, particularly when the deprivation of rights is not going to be felt across the board by every single American,” he said, adding that a “very rigorous legal battle” has been shifted onto states.

Religious leaders in California had mixed reactions to the ruling.

“For nearly fifty years, America has enforced an unjust law that has permitted some to decide whether others can live or die; this policy has resulted in the deaths of tens of millions of preborn children, generations that were denied the right to even be born,” Los Angeles Roman Catholic Archbishop José H. Gomez said in a statement supporting the Supreme Court’s decision.

“Most of our people, including myself, lean towards abortion as not a constitutional right,” he emailed. “There will be some that disagree.”

The pastor said he was not concerned over the potential loss of churchgoers who may turned off by the decision, adding that abortion should not be a “dividing line.”

“Self-identifying Christians have differing views on the legal issue,” he said. “My hope is that churches will not divide on this, but that we can find common ground on our value of all human life.”

Though the Lutheran Church-Missouri Synod applauded Roe’s overturning, the Rev. ST Williams Jr., a local Missouri Synod minister, said the ruling “set us back as a nation, a people and a culture.”

Williams, who leads a congregation of mostly Black, Caribbean, African and Latino immigrants at St. Paul Evangelical Lutheran Church in West Adams, said the nation was already on edge because of COVID-19, mass shootings and inflation.

“It’s a sad day as a Lutheran Church minister because it will cause a lot of chaos and calamity,” he said.

“A woman’s fundamental health decisions are her own to make, in consultation with her doctor and her loved ones — not to be dictated by far-right politicians,” she said in a statement. “While Republicans seek to punish and control women, Democrats will keep fighting ferociously to enshrine Roe v. Wade into law.”

Despite the promises, many young people described a sense of frustration and fear.

Sophia Kianni, a student at Stanford University, said she was concerned for students who may lose access to safe abortions, particularly at colleges and universities, where rates of sexual assault remain high.

“This decision will only exacerbate existing inequities for low-income women of color, who are going to disproportionately feel the brunt of this attack on our reproductive freedom,” the 20-year-old said.

Delaney Bien, 22, said she felt betrayed by the decision from a branch of government that is designed to be apolitical but has been roiled in scandal, including reported attempts by the wife of Justice Clarence Thomas to overturn the results of the 2020 presidential election.

“Our system is broken,” Bien said. “I know dozens of people for whom this is a real threat to their livelihood and bodily autonomy. I’m afraid this is just the start of a major leap backwards for not only women’s rights, but LGBTQ+ rights as well.”

Many on Friday struggled to find the right words in the wake of the seismic ruling.

“It’s impossible to put into words the emotions I am feeling right now. I am saddened, but I am also outraged,” Los Angeles County Supervisor Hilda Solis said in a statement.

“But I want to be clear: Abortion is legal and safe in California, including Los Angeles County. To the millions who are angry with today’s decision — I share in your unbelievable pain and your fury. And I stand with you, ready to fight back.”

Some were doing just that. Outside the Highland Park Planned Parenthood, Rosenthal waved a sign that read, “MY BODY, MY RULES,” as cars passed. A few drivers honked and waved.

Courtney Farren, 25, spotted the sign as she waited at the light to cross Figueroa. She said she had been on the verge of tears all morning.

“There’s a collective feeling with women today,” Farren said, putting her hand on her chest. “A weight, a heaviness.”

Although California officials have vowed to protect access to abortion, Farren said she was worried that some states will see a split in which people with money will continue to have access to abortions but low-income women and people of color will not.

“I’ve never lived a life where the right to abortion wasn’t protected,” Farren said, her voice wavering. “And it’s hard to feel right now like there’s anything I can do.”

Rosenthal patted her arm and told her: “We did it once. I’m an old lady. We’ll do it again.”