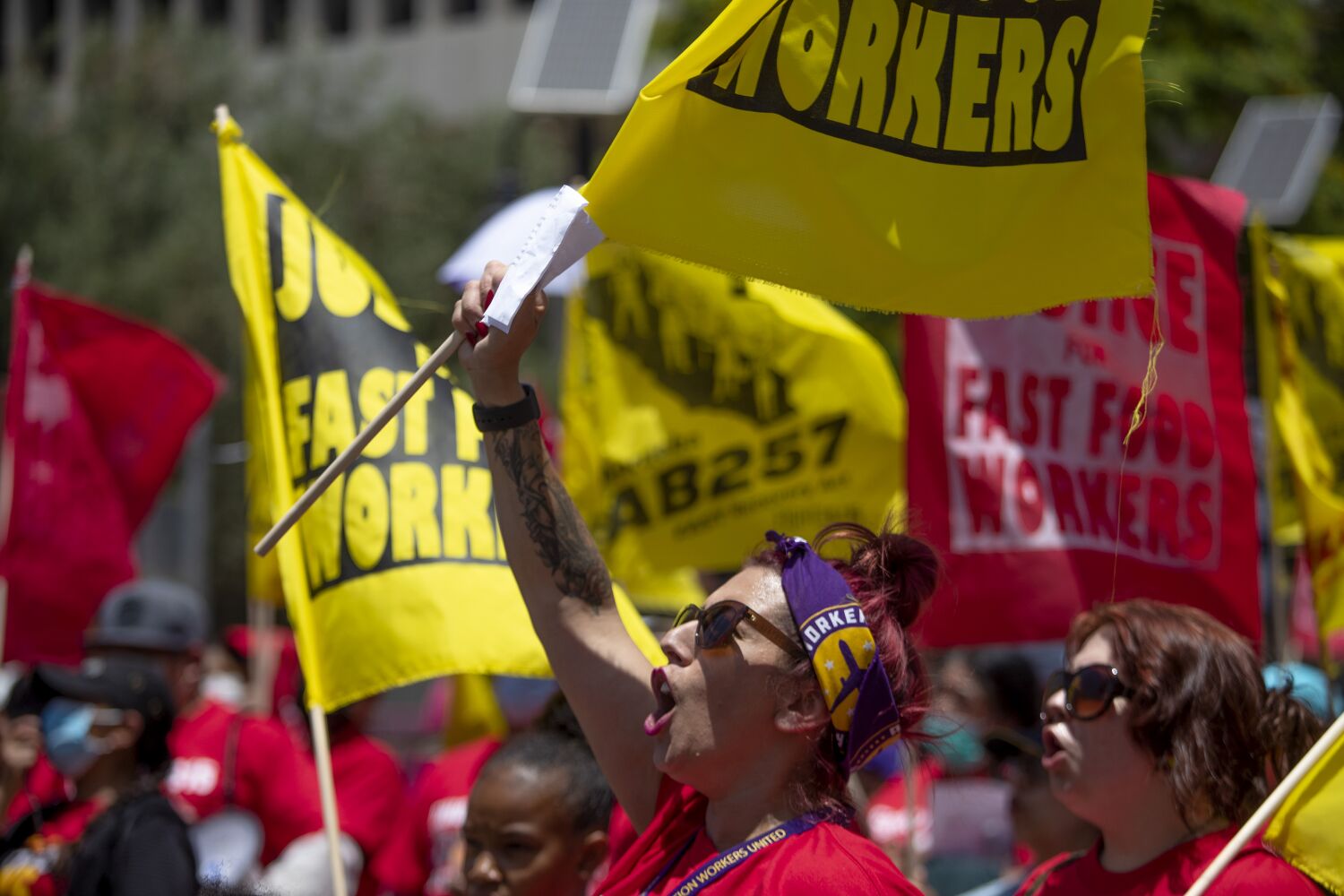 California’s largest labor union filed a complaint with state officials on Thursday alleging that a fast-food industry coalition violated state election rules in its campaign to block the enactment of a landmark labor law.

The Service Employees International Union California complaint, filed Thursday with both the California Secretary of State and the Attorney’s Office, focuses on a referendum filed in September to repeal AB 257 that Gov. Gavin Newsom signed into law on Labor Day. The union supported legislation known as the Fast Recovery Act to improve protections for fast food workers.

The union alleges that trade groups, fast-food companies and franchisees are backing a vigorous and costly process to collect voter signatures that “willfully misleads voters” in a sprint to qualify the referendum for the November 2024 election. Clerks petition distributors for the referendum have approached voters, the complaint says, asking them to sign the petition under the false pretense that the effort is aimed at raising the minimum wage for fast-food workers.

Instead, the referendum effort would allow voters to decide whether to repeal the Fast Recovery Act, which creates a unique council of workers, company officials and state officials with the power to raise the minimum wage for franchise restaurant workers as high as $22 next year.

The council is mandated to set industry-wide minimum standards for wages, hours, and other conditions for fast-food workers nationwide. It’s a model that could change the way workers negotiate standards with their employers not just in California but across the United States

Throughout the legislative process, fast-food companies and franchisees argued that doing so unfairly singled out their industry would burden operations with higher labor costs and send food prices skyrocketing.

Save Local Restaurants, the coalition pushing to repeal the law, said in a statement that it had been “vigilant to maintain compliance with California election laws,” adding that it found the complaint “frivolous.”

“This is another brazen attempt by SEIU to force Californians into a law they don’t want and can’t afford,” said the coalition, which is led by the International Franchise Association. and the National Restaurant Assn.

The coalition, in line with previous criticism, said the new law would increase food prices and ultimately “cost thousands of jobs and force local businesses to close”.

The coalition said it has collected “nearly a million” signatures so far: “We are on track to collect hundreds of thousands of signatures beyond what is required by law as voters overwhelmingly oppose this misguided law.”

It is common to collect more than the minimum number of signatures as some signatures may be deemed invalid.

The complaint alleges several Cases of petition signature collectors misrepresenting the problem. A commissioned circulation firm in Los Angeles repeatedly said the petition was “for a minimum wage increase,” while another in Stockton, California, asked for signatures on a “petition raising the minimum wage for fast-food workers to $22.” will be an hour,” the complaint reads.

“The campaign literature, materials and other messages clearly show an attempt to persuade voters to sign a petition based on false and misleading information,” wrote attorney Richard Rios of the Olson Remcho law firm, which represents the union the complaint.

SEIU California, in the complaint, urges state authorities to “promptly investigate” and take action “willfully and knowingly” against Save Local Restaurants, a coalition of California small business owners, restaurateurs, franchisees and others supporting the referendum, as well as individual petition circulators and making false statements” to persuade voters to sign the petition for the referendum.

The Times reviewed video footage taken by organizers working with SEIU’s “Fight for $15” campaign showing four different interactions in which petitioners campaign for the referendum to promote it as a move to raise the minimum wage for fast-food workers represented.

In a video reviewed by The Times, Fight for $15 organizer Cherie Wallace asks a petition circulator who reached out to her, “So this is supposed to bring the minimum wage to $22?”

“Why does it say it challenges it?”

“What touches me is that this says it challenges it. Why does it say it ‘challenges’ it?”

The petition distributor is silent and Wallace prompts him again, asking if signing the petition will definitely help increase pay.

He reassures her: “It’s like people at McDonald’s, Burger King, Taco Bell for the workers. It will help them.”

To appear on the November 2024 ballot, supporters of the referendum must submit approximately 623,000 voter signatures by December 4. AB 257 is scheduled to go into effect on January 1, but if the referendum qualifies, the law would be suspended until voters can weigh in.

Biden Is Angry but Not Serious

ABC ‘General Hospital’ Spoilers: Elizabeth reaches out, Ava’s in danger, and Sonny’s had it

War in Ukraine: A street struggles to rebuild after a bombing