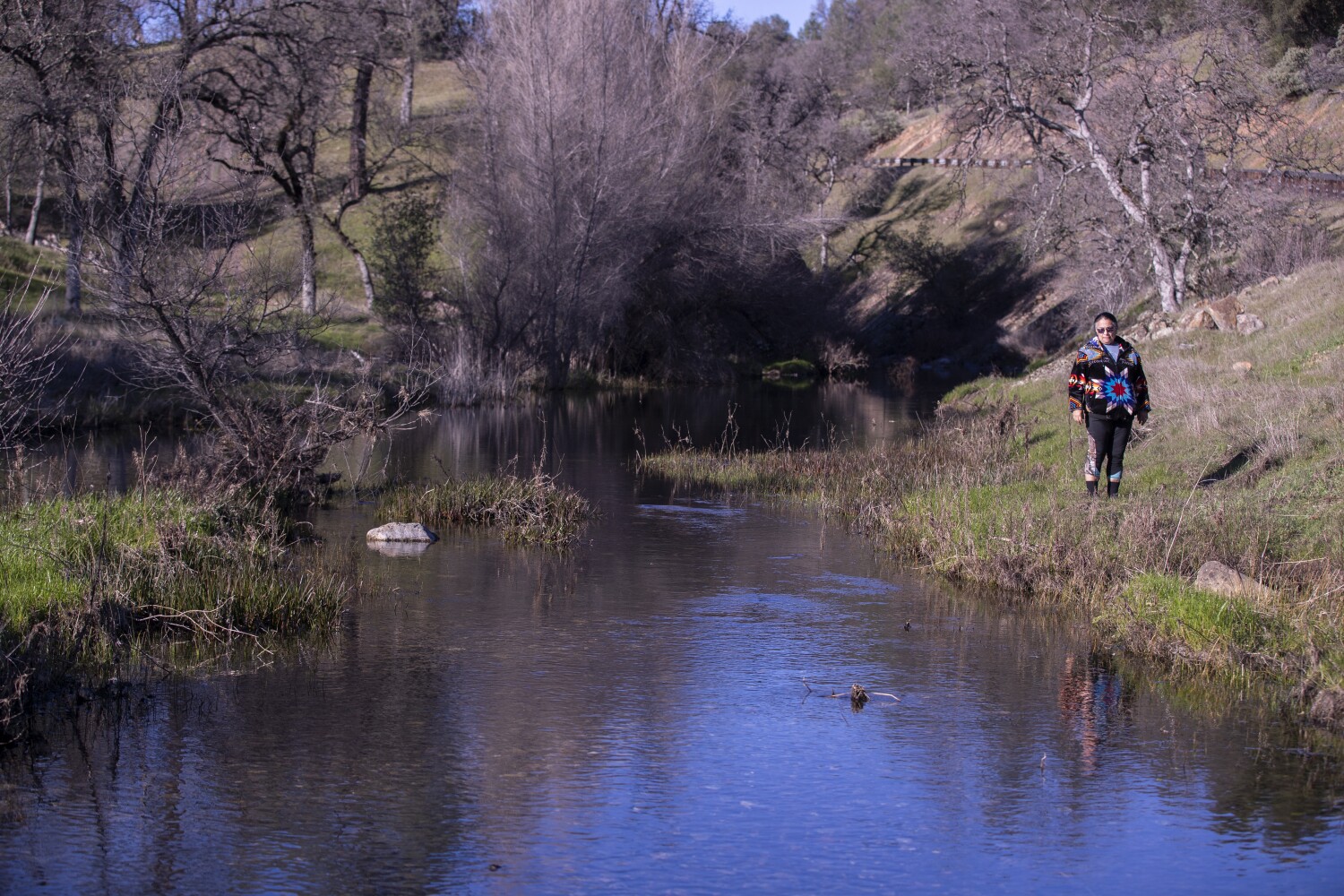 Tribes and environmental groups are challenging how the state manages water in the Sacramento-San Joaquin River Delta, a major source of much of California, arguing that the degradation of aquatic ecosystems is linked to genetics. The state’s troubling property is racism and oppression of indigenous peoples.

A group of activists and Indigenous leaders is asking the state to review and update its water quality plan for the San Francisco Delta and Bay, where fish species are struggling, algae blooms every day. aggravated and climate change is adding to the stress.

Tribes and environmental groups have filed a petition with the State Water Resources Control Board asking the state to change its approach and apply science-based standards to ensure adequate flows in the delta to improve water quality and sustain diseased fish species, including endangered species.

They say the ecological crisis in the delta stems from California’s history of violence against indigenous peoples, tribal land grabs and structured racism that have shaped how the water rights system was established more than a century ago. They said deteriorating conditions at the estuary represent “a continuation of California’s history of discriminatory water management.”

They wrote in the 169-page petition that the state’s water board “failure to adopt sufficiently protective water quality standards has resulted in a system of water rights discrimination.” was founded on the expropriation of native Californians and the exclusion of communities of color, and that continues to prioritize the interests of large-scale agriculture over the interests of vulnerable Californians living in Delta. “

The lawsuit was filed Tuesday by the Winnemem Wintu Tribe, Miwok Indian Shingle Springs Band, Save California Salmon, Little Manila Rising and Restore the Delta, who are represented by a legal team from the Clinic Environmental Law of Stanford Law School.

They say the state should adopt new water quality standards to ensure sufficient flows in the delta. They called on the state’s water board to “adjust and restructure water rights as necessary,” including pre-1914 top-level rights, to implement diversion and export standards and restrictions. country.

“Business as usual cannot continue. It is not sustainable,” said Caleen Sisk, chief and spiritual leader of the Winnemem Wintu Tribe. “They need to rethink and do it again. And let’s do it better.”

For the Winnemem Wintu, whose ancestors were displaced by the construction of the Shasta Dam, salmon is central to their cultural and spiritual traditions. But the endangered winter-running Chinook salmon, which migrate across the plains, have endured years of drought and low reservoir levels that have left the Sacramento River too warm for most of their offspring to have can survive.

Sisk and others who signed the petition say the crisis in the delta has been “aggravated through the construction and operation of large-scale delta water export projects to promote promote the development of agricultural industries in the arid regions of the South.”

Large amounts of water are diverted to supply large tracts of farmland that grow almonds, pistachios, grapes, alfalfa and other crops. Water supplies to agriculture have been cut dramatically during times of drought, forcing growers to either let some land dry or pump more groundwater.

But Sisk and others say the water system is structured in a way that continues to favor major agricultural interests with premium water rights.

Some of the oldest rights date back to the 1800s, when white settlers made their claim, sometimes by nailing a notice to a tree.

Today, while many crops are exported in bulk for profit, water diversion is causing an increasingly worsening environmental situation, Sisk said.

“How is it that Big Ag uses 80% of its water and then ships its products out of the state or out of the country, and uses all of this water, and the state runs a deficit?” Sisk said. She said the current system is providing agriculture with too much water, while not providing nearly enough for local communities, fish and the environment.

In March, Governor Gavin Newsom’s administration announced a controversial $2.6 billion deal with major water suppliers that it said would boost the delta’s ecology. Under these proposed voluntary arrangements, the agencies supplying farms and cities would give up some water or secure additional supplies to help threatened species, while the agencies of State, federal, and local funds will fund habitat improvement projects in the basin.

The plan has been condemned by environmentalists because a series of precautionary agreements negotiated in the public eye will not provide nearly enough water for threatened fish species or the overall health of the river. area.

Petitioners say the proposed arrangements, which have yet to be approved by the state’s water management board, are the wrong approach. They said the tribes should have been consulted and the process should instead begin with updating water quality standards.

“That process is continuing to progress with a framework that does not protect the delta,” said Barbara Barrigan-Parrilla, executive director of Restore the Delta. “And science has proven that what the delta needs is more water moving through it.”

State data shows that on average, about 47% of the state’s water goes into the environment, staying in rivers and wetlands. About 42% is used for agriculture, while 11% is used in cities and towns.

However, the groups said in their petition that dams and water diversions have drastically reduced flows in the delta. On average, about 31% of river basin flows are diverted upstream from the delta, they say, and the combined effects of these diversions and water exports have reduced the average annual outflow from the delta. by almost half between 1986 and 2005.

“If nothing changes, the climate crisis will push these already fragile conditions to the brink of disaster,” they said in the petition. “Without improved management, outcomes will include increased salinity, harmful algae growth, spread of uncontrolled invasive species, decline of native fish species and other harms to estuary ecosystems – all of which will add violence to tribes and other vulnerable people in lowland communities. ”

Elaine Labson, director of health equity for Little Manila Rising, said immigrants who came to California during the US occupation of the Philippines worked in construction dikes in the plains and worked in asparagus fields, onions and potatoes. However, they did not win the right to return home.

“From 1913 to 1945, California’s racist Aliens Land Law prevented Filipinos from owning property, which was a prerequisite for obtaining it,” Labson said in a statement. right to return home.

Today, the deteriorating condition of delta waterways in and around Stockton poses health risks to residents, she said. Labson notes that high nutrient levels and warm water, partly due to low flows in the San Joaquin River, create conditions that allow harmful algae to bloom.

Last year, she pointed out, the state’s water board passed a racial equality resolution in which officials “recognized that the historic effects of institutional racism must be faced throughout the government”. If the solution makes sense, Labson said, the board “must act to restore flows to the delta.”

The state water commission said officials will need to carefully evaluate the petition before responding.

“Updating the Bay-Delta Plan is one of the board’s highest priorities,” the agency said in a statement. “The Board completed a significant 2018 update for the Lower San Joaquin tributaries and anticipates completing updates for the Sacramento River and delta over the next two years.”

It said the process would include an analysis of the proposed voluntary arrangements, and that the panel would analyze the arrangements “along with other alternatives for updating the Bay-Delta Plan.”

Sydney Speizman, a student attorney with the Stanford Environmental Law Clinic who helped prepare the petition, said the board must update the plan and its water quality standards every three years. times, but it’s been at least 16 years since the last time it happened.

“They were completely irresponsible with the standards they had set,” Speizman said. “The delta is in crisis, and climate change is pushing that to the brink. And the board, we are saying, needs to fulfill its duties under the law to protect this ecosystem. “

Commentary: Why two theatrical extravaganzas bode well for the state of opera in L.A.

A travel reporter found 101 best things to do in California

Poinsettias are not deadly to pets