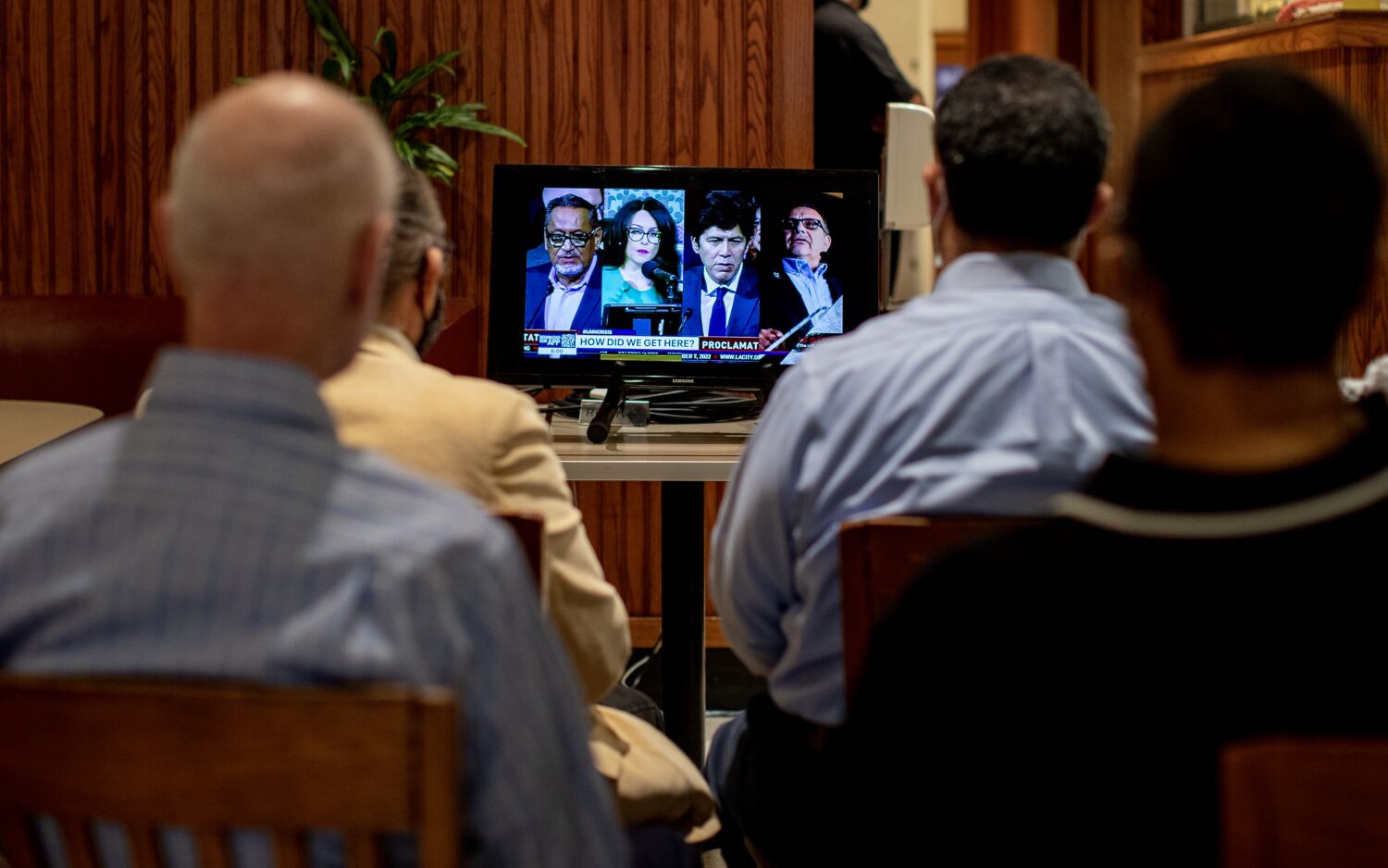 After leaked recordings of racist comments from some of Los Angeles’ most powerful Latino leaders swept the city for the past two weeks, it was clear no healing would occur during Thursday night’s hour-long town hall. But many Angelenos were determined to unite and move forward – starting with the resignation of affected city council members.

The most common message coming from dozens of residents at LA in Crisis: The Call for Change, hosted by The Times and KTTV Channel 11, was that council members Kevin de León and Gil Cedillo should resign. Both have been stripped of their committee duties but have resisted calls to resign.

Former Council President Nury Martinez — who made the majority of anti-Black and anti-Indigenous comments in the taped discussion with De León, Cedillo and LA County Federation of Labor President Ron Herrera — has already resigned, as has Herrera .

“You must resign immediately because every day you are in office is another racist attack,” said Michael Browning, the president of the Van Nuys Neighborhood Council. “It’s time for her to go.”

The vast majority of participants polled at City Hall agreed that the two council members should resign.

“There are very few things that get you such a high level of agreement,” said Councilor Marqueece Harris-Dawson. “The amazing thing is that you can ask very few questions about politics and you get 85% [agreement].”

Councilor Mike Bonin, whose black son was the target of some of the most shocking comments in the leaked audio, said everyone deserves a “path to salvation… but that path doesn’t begin in the council chambers.”

Though Bonin’s term will soon be up — as will Cedillo’s — he urged remaining and future council members to focus on tackling inequality and injustice. Angelenos will play a key role in this, he said, by electing the next wave of leaders in November.

“The Council must go beyond words and lip service and get the job done,” Bonin said Thursday night. “If we choose the right people to get through this incredibly difficult and challenging moment, we can get through it.”

Chaya Crowder, assistant professor of political science and international relations at Loyola Marymount University, said the response of so many Angelenos demonstrating at council meetings demanding change has been encouraging.

“I think there is reason for hope and that people could be more politically engaged at the local level based on what we’ve seen this week,” Crowder said.

Manuel Pastor, director of the USC Equity Research Institute, said he was struck by a surge in youth activism, particularly young Latinos, who were challenging their older generation of leaders.

“I think young people are now ready to take the lead,” Pastor said. “What we need for all of our communities is an agenda for improving the situation that can actually bring us together — not falsely through kumbaya, but through tough conversations.”

The racist and derogatory comments on the leaked audio recordings were made as the three council members and the top union official discussed how to strengthen their power in the decennial general election process last year.

Many participants called for changes to the long-controversial process on Thursday.

Steve Kang, who has worked for months at the grassroots level to improve Koreatown’s representation, said councilors shouldn’t be involved in drawing political lines.

He said he was working on a plan that would delegate redistribution decisions to an independent commission.

In Koreatown, about a dozen community leaders and residents spoke during City Hall commercial breaks about the need for the neighborhood not to be “token” during redistribution and what it would take to remove council members.

“Maybe people will forget?” A KTTV reporter marveled at the crowd.

“Not this one,” said James An, President of the Korean-American Federation of Los Angeles.

Daisy Gutierrez, an American from Oaxaca who came to the US when she was 15 and has lived in Koreatown for 22 years, fanned her head and wiped away tears as she discussed the council members’ comments — including Martinez’s reference to Oaxacans as “little little dark people.”

People trusted Cedillo, Gutierrez said, citing projects like community cleanups where the councilor’s office and residents had worked together.

“In just a few seconds it just destroyed everything, the trust in them,” said Gutierrez, 40.

But the community will remain, she said. “We are hard workers”

Francesca LeRue, a Latina who has lived in Koreatown for 30 years, said it’s incredibly upsetting to hear council members mock a black child, especially when the group is disproportionately represented in the child welfare system.

“They have to go because they clearly don’t represent the heart and soul of Los Angeles,” she said of the council members.

Although she is suspicious of what is to come, she has hope.

“There must continue to be hope,” she said. “[We] Living on hope and giving it up for these three people goes against who we are as Los Angeles.”

Harris-Dawson said city leaders need to listen to their constituents but not lose sight of the important issues moving in the council, like affordable housing or pandemic recovery.

“People’s work must go on,” Harris-Dawson said. “The city can’t afford to let things like this go by because we have these two recalcitrant and selfish members.”

How Rosaline Is Different From When You Were Mine

NFL 2022: Philadelphia Eagles’ Miles Sanders out to get ‘respect that I finally deserve’