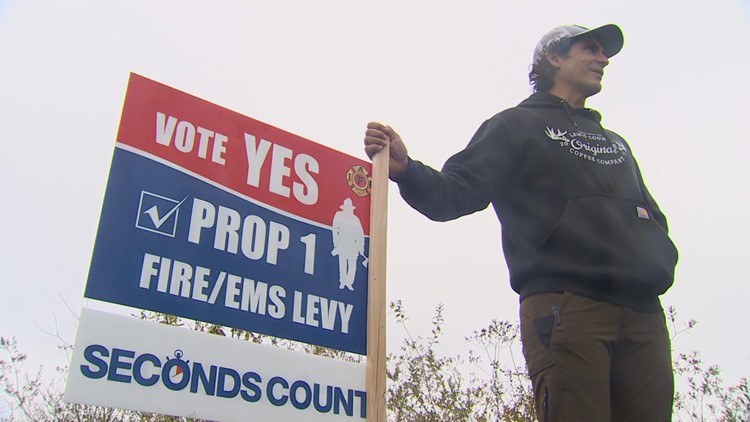 A surveillance camera captured a picture of the alleged thief.

Signs on 110th Avenue and Delphi Road urging voters to pass a West Thurston Fire levy in November are consistently being removed.

“This is theft and vandalism,” said Garza, who filed a police report with the Thurston County Sheriff’s Office.

Another firefighter set up a surveillance camera that appeared to capture someone taking the sign out of the ground.

“We welcome resistance,” Garza said. “We welcome people coming in and the opportunity to teach them in a constructive way.”

In an interview earlier this month, Fire Chief Rob Smith said if the measure fails, half the West Thurston Regional Fire Authority’s firefighters could lose their jobs and three of the five department stations could close.

In August, a levy to continue funding the agency failed to get the required supermajority.

“It sure is disappointing, it was definitely a surprise,” Smith said.

He said the agency is struggling to keep up with a growing population and a steady increase in service requests.

The agency has decided to give voters another chance to generate revenue in November.

They currently pay an average of 97 cents per $100,000 appraisal for fire protection.

Without the increase, Smith said cutbacks are inevitable and could double the time it takes its reduced staff to respond to 911 calls.

Dodgers weighing playoff pros and cons of their dominant ways

Calmes: The biggest losers — the GOP and Donald Trump