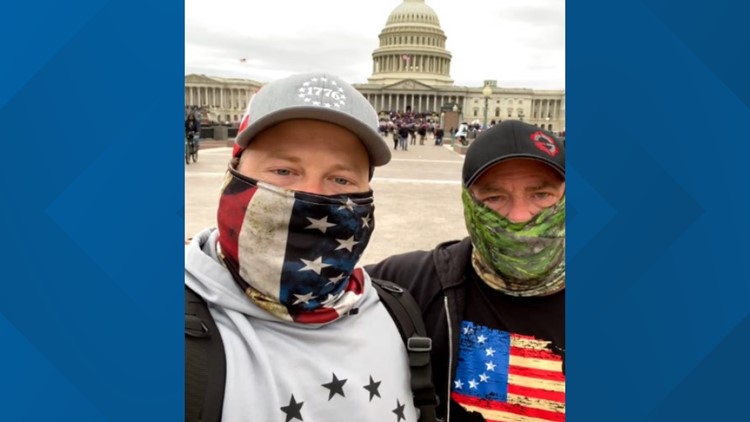 Battle Ground’s Jeremy Grace pleaded guilty to one count of entering and remaining in a restricted building or property.

PORTLAND, Ore. – A Battle Ground man who pleaded guilty to a misdemeanor charge for his role in the Jan. 6 attack on the US Capitol has been sentenced to 21 days in prison and supervised release.

Jeremy Grace, 38, was among the very first rioters to enter the US Capitol, according to federal prosecutors. Grace and his father Jeff Grace of Battle Ground took selfie-style photos both inside and outside the Capitol during the riot.

“I accept responsibility for my actions that day,” Grace told US District Judge Randolph Moss in Washington DC by phone. “I never wanted to harm my family or my business.”

On April 8, Grace pled guilty to one charge of entering and remaining in a restricted building or compound. As part of the plea bargain, federal prosecutors agreed to drop three additional charges.

Court records show that Grace traveled to Washington DC with his father, Jeff Grace, to attend the rally in support of Donald Trump. They traveled and stayed at a hotel with a member of the Proud Boys, identified in court records as “Travis.”

The three of them attended a Jan. 5 gathering of Proud Boys from across the country, prosecutors said. Jeremy Grace was not a member of the Proud Boys, according to prosecutors and defense.

RELATED: Jan. 6 panel: Mob that stormed Capitol was within 40ft of Pence

On Jan. 6, Grace and his father joined a large group of proud boys at the Washington Monument before heading to the US Capitol, according to federal investigators.

Despite his claims that he came to Washington DC to attend a rally for former President Donald Trump, investigators said Grace never attended the rally that day.

Federal prosecutors have included photos and stills from security footage in court documents showing Grace and his father a few yards behind the front line of protesters pushing past law enforcement protecting the Capitol. Footage captured by security cameras shows Grace entering the US Capitol and then watching another rioter attempt to steal a Congressional lectern.

Grace used his cell phone to take multiple selfie-style videos and photos, prosecutors said. In one video, investigators said Grace and his father repeatedly chanted “Our house, our house” while outside the US Capitol.

Grace spoke to the FBI both before and after his arrest. According to prosecutors, in two separate interviews with federal agents, he lied by claiming he never entered the US Capitol building. Even when confronted with photos of himself and his father in the Capitol on January 6, investigators said Grace denied knowing who was in the photos.

As part of a plea agreement, Grace admitted he destroyed three incriminating selfie-style videos from his phone.

During the sentencing hearing, Grace’s defense attorney portrayed the Battle Ground man as a dedicated family man with a wife and two children. Several family members submitted letters of support to the court on Grace’s behalf, along with his employer ALCO Electric. Grace is a journeyman electrician.

“Jeremy continues to be a great employee and father. I know him well enough, even though he was not involved in any acts of violence, I can say that he deeply regrets the pain caused by his presence on January 6,” ALCO Electric owner Brian Alexander said in court filings .

Grace is a Navy veteran with no criminal record.

“I accept responsibility for my actions,” Grace said in a letter to the court. “I know that I was part of a group and that many members of that group have become violent. That was never my intention. I never wanted to destroy property or hurt people, and I never did.”

Grace’s defense attorney said the Battle Ground man was inside the Capitol Building for a total of eight minutes.

Prosecutors allege that Grace attempted to capitalize on his participation in the January 6 riots by helping his father buy T-shirts, baseball caps, water bottles, stickers and other memorabilia with phrases like “Our House” or “Thesis.” Colors Don’t Run” for sale. and images of the US Capitol Building, some with the American flag emblazoned on them.

His defense attorney argued that Grace did not break any laws by helping sell those items, nor did he personally make a profit.

Court records show his father, Jeff Grace, is scheduled for a July 28 hearing.

Lewis Hamilton hits out at fans for cheering after qualifying crash

Pizza near me: Eye-popping pies dazzle Uptown at Chicago’s Milly’s Pizza In The Pan on Argyle Street

Coachella man arrested after mom, grandma of his kids killed