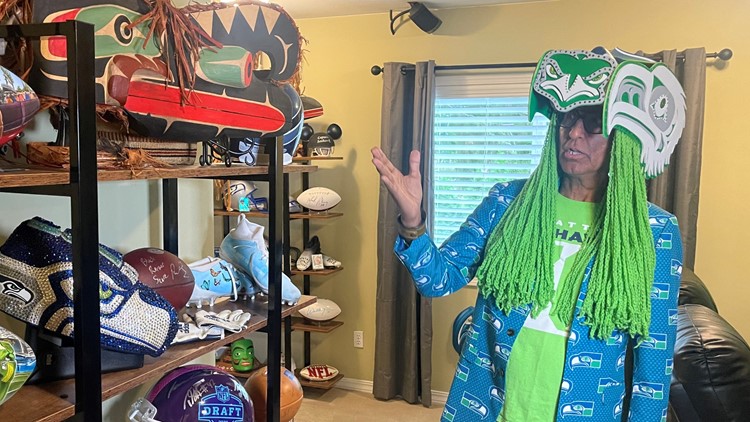 Wallace Watts is Captain Seahawk, and he’s proud to wear a headdress to every Seattle Seahawks game.

SEATTLE — A Seahawks superfan uses his culture and love for the team to do good in the world.

Captain Seahawkalso known as United Airlines pilot Wallace Watts, has flown more than a million miles around the world to attend Seahawks games.

“In 1985, I was the first Native American ever to be hired by a major airline,” Watts said.

Watts is also proud to serve as Captain Seahawk for his favorite team.

Watts’ journey as Captain Seahawk began nearly a decade ago with an important discovery regarding his legacy.

“Captain Seahawk began nine years ago when the Seahawks found the original headdress that the Seahawks logo came from and when I discovered it was from my Native American tribe I set a goal of trying to make over 40 million NFL -To educate fans worldwide about this story. ‘ Watts said. “The mask is a transformation mask. I come out as a wild person and change and come out as a warrior.”

He said Captain Seahawk was a calling. He is proud to wear the blue and green. His headdress represents his heritage.

Watt’s goal as Captain Seahawk is to raise money for local charities and organizations. Captain Seahawk and his wife also run a Facebook page with more event information, links to donate and their story.

“For me, transforming into a warrior really changed my life, and from that moment on, I dedicated my life to helping others,” Watts said.

Watts is committed to sharing his legacy with other Seahawks fans to preserve what his tribe stands for and what he fights for. Like the dance transformation, Captain Seahawk has his own transformation on game days.

“We’re gearing up for game day,” he said in his bathroom while face paint spilled over the counter.

He wears his headdress, suit and face paint to games for hours.

Like the wings on his jacket from flying, a Seahawk uses his wings to take off and soar in victory.

“Being a 12 is the blood in my veins. The coat of arms is in my family. Can you imagine that? For me it is life. Being a 12 is life and it will last until the day I die Remember this. In the end it is very rewarding. Especially if we win the Super Bowl,” Watts said.