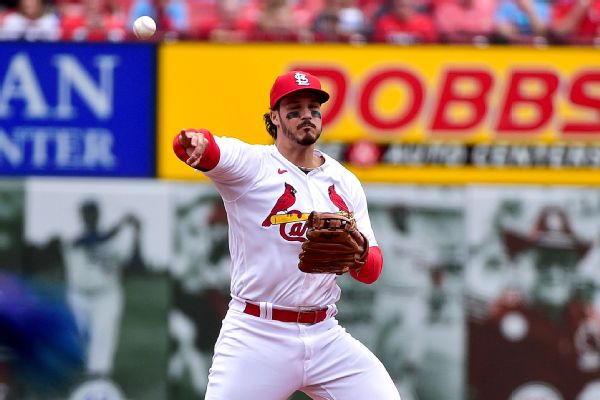 PHILADELPHIA — St. Louis Cardinals third baseman Nolan Arenado on Tuesday became the fourth infielder to win 10 consecutive Rawlings Gold Gloves when the winners of the sport’s most prestigious field awards were announced on ESPN2 ahead of Game 3 of the World Series.

Arenado, 31, has won the National League Gold Glove at third base in each of his 10 seasons in the major leagues. This streak ties former Seattle Mariners outfielder Ichiro Suzuki for the longest by a player at each position to start a career.

Previously, the Gold Gloves tended to favor repeat winners, but this year’s list of honorees marked a season of unprecedented changes. A record 14 players won their first Gold Gloves, including all but one American League winner.

The only repeat winner of the AL was the Yankees’ DJ LeMahieu, who was recognized as a utility player.

Philadelphia Phillies catcher JT Realmuto won his second Glove Glove and joined Houston’s Pena and Tucker in hearing of their honor ahead of their World Series contest.

“It sure is a pretty cool moment,” said Pena. “[Getting] congratulated by our teammates. We know the focus is on the game, so we’re going to enjoy that a bit and then get ready for the game.”

Pena joined Kwan and Donovan as winners during their rookie season, another record. The only other time there were even two rookie Gold Glovers was in 2020 (Luis Robert and Evan White).

With the award, Pena continued to prove a worthy successor to the Houston position for Carlos Correa, who won the award last season. Pena was the first rookie shortstop to win a Gold Glove.

“I heard that today and was shocked because I didn’t know it was a thing,” Pena said. “But it’s pretty cool.”

The end of the curse: A look back at the Phillies 2008 World Series