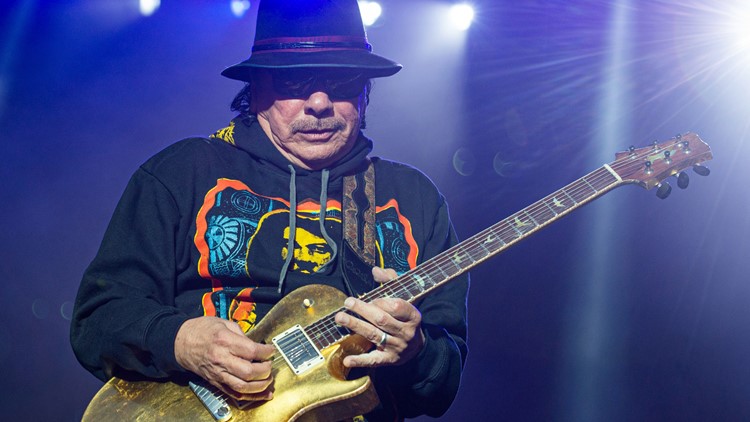 The 74-year-old musician was “overwhelmed by heat exhaustion and dehydration” at a show in Michigan on Wednesday.

WASHINGTON – Guitarist Carlos Santana has postponed six dates of his Miraculous Supernatural Tour after collapsing on stage earlier this week.

The reason for the series of shifts was “as a precaution for the health of the artist,” Michael Vrionis, president of Universal Tone Management, said in a press release.

Shows in Indiana, Ohio, Wisconsin, Arkansas and Texas were postponed Friday night. All shows from July 23 through the end of 2022 are still confirmed.

Santana was scheduled to play at the Ruoff Music Center in Noblesville, Indiana on Friday night. After the opening group Earth, Wind and Fire finished playing, fans were told that Santana would not be performing.

“Carlos is doing well and looking forward to getting back on stage soon. He just needs rest,” Vrionis said in the statement. “Santana deeply regrets this postponement of his upcoming performances, but his health is our greatest concern. He looks forward to seeing all of his fans very soon.”

Santana collapsed on stage Tuesday due to heat exhaustion and dehydration. He was performing at the Pine Knob Music Theater near Detroit when he fell.

Soon after the incident, Santana thanked fans for their prayers on Facebook, saying he forgot to eat or drink water, which caused him to pass out. He said he and his wife Cindy are “good” and “just take it easy.”

Santana performed alongside Earth, Wind & Fire as part of his Miraculous Supernatural 2022 Tour to promote his 26th studio album, Blessings and Miracles, which was released in 2021.

Ohtani a 2-way All-Star again; JRod is a reserve

Hates crimes against Asians jumped 177% in California in 2021

Crash-photo lawsuits from Vanessa Bryant and O.C. man are combined