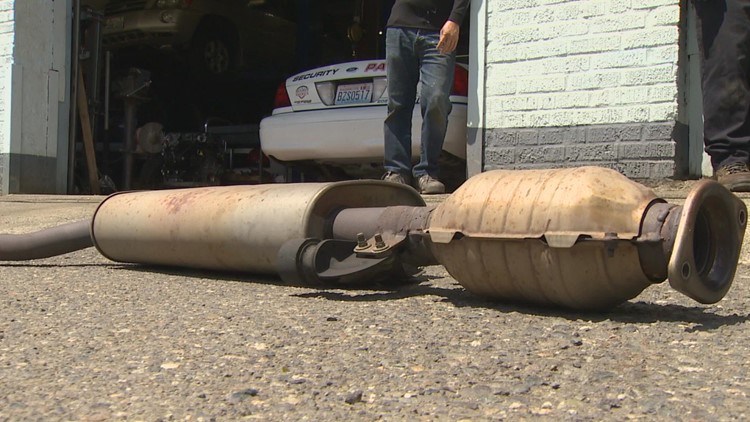 Video posted to Ring.com shows thieves in the act stealing a catalytic converter from a car just after midnight on July 9 in Renton’s Victoria Hills neighborhood.

“There has to be a better way of doing things than stealing catalysts,” said Tony Barngrover.

Video posted to Ring.com shows thieves in the act stealing a catalytic converter from a car just after midnight on July 9 in Renton’s Victoria Hills neighborhood.

“It’s just what it is and you hope you get it back and it’s not too ripped up,” Barngrover said.

Barngrover lives less than a mile from where the ring video was captured. Unfortunately, he too has found that his own vehicle is the target. His van was stolen on May 19 earlier this year. Although found a few days later, the catalytic converter was stolen along with other damage.

“It was really sad that it was taken away and now I’m parking it here because if you look at the door here you can see the lock hanging out of the door,” Barngrover said.

Barngrover said his neighbor had surveillance video showing the theft, revealing a red CRV following closely. He believes it’s the same red CRV that was involved in other thefts.

“Three weeks later, my neighbor’s pickup truck was also stolen, and it was the same car that followed my car,” Barngrover said.

He hopes that the perpetrators will think about their actions.

“It’s not so much about what you’ve done in the past as it is about what you want to do with your life in the future, and if you don’t want your past to haunt you everywhere you should think about making something a little to do differently. ‘ said Barngrover.

KING 5 has contacted the Renton Police Department for updates on the thefts, but police have yet to get in touch with KING 5.