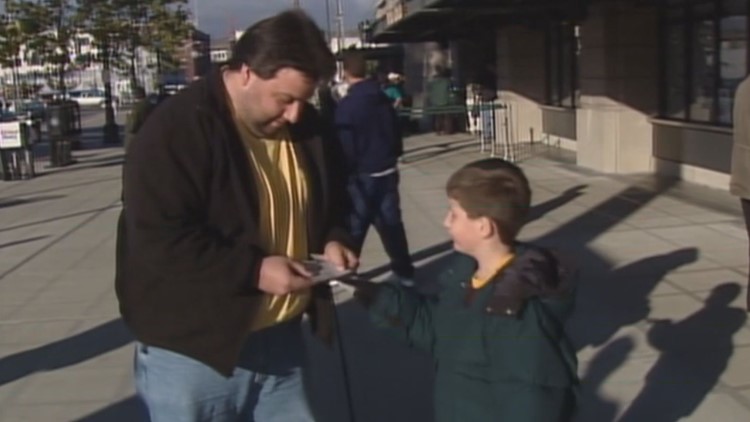 The last time the Mariners went into the postseason was 2001, Brian and Truxton McCoy scored tickets to a playoff game.

SEATTLE — The archives of KING 5 have found 7-year-old Truxton McCoy and his father Brian who snagged last-minute tickets to a playoff game when the Seattle Mariners last entered the postseason in 2001.

Truxton was asked if the Mariners would beat the Yankees. He replied, “I want them to kick their ass.”

21 years later, KING 5 found Truxton and Brian again to interview them about Friday night’s historic win as the Mariners secured another trip to the playoffs and ended one of the longest postseason droughts in history.

“He was super excited because Ichiro was the talk of the town,” Brian McCoy said of the 2001 interview. “So everyone was excited to see him. We wanted to see him live. So everything was very exciting because it was all new. We’ve never had a team that went anywhere. That’s why we’re really looking forward to it.

The pair are now very excited for the Mariners to have a playoff spot again.

“It kind of feels like it’s coming full circle,” Truxton said. “Just because it’s been a while. It reminds me of being a kid and getting excited and looking at the baseball cards. And it’s just, I don’t know, it’s like an exciting hope that I haven’t had in a bit. And I’m just excited about it. I definitely thought I love it. “

There is an electric vibe at T-Mobile Park that is bringing out the kid in many Mariners fans.

The McCoys plan to make it to another game when they can. They said there is nothing like it.

“When I can just like back then, sometimes it’s hard to get tickets,” Truxton said.

Op-Ed: Hear what the founders are saying

Rams’ 31-10 loss to Buffalo Bills by the numbers

Jalen Ramsey calls out the Rams’ offense after loss to Bucs