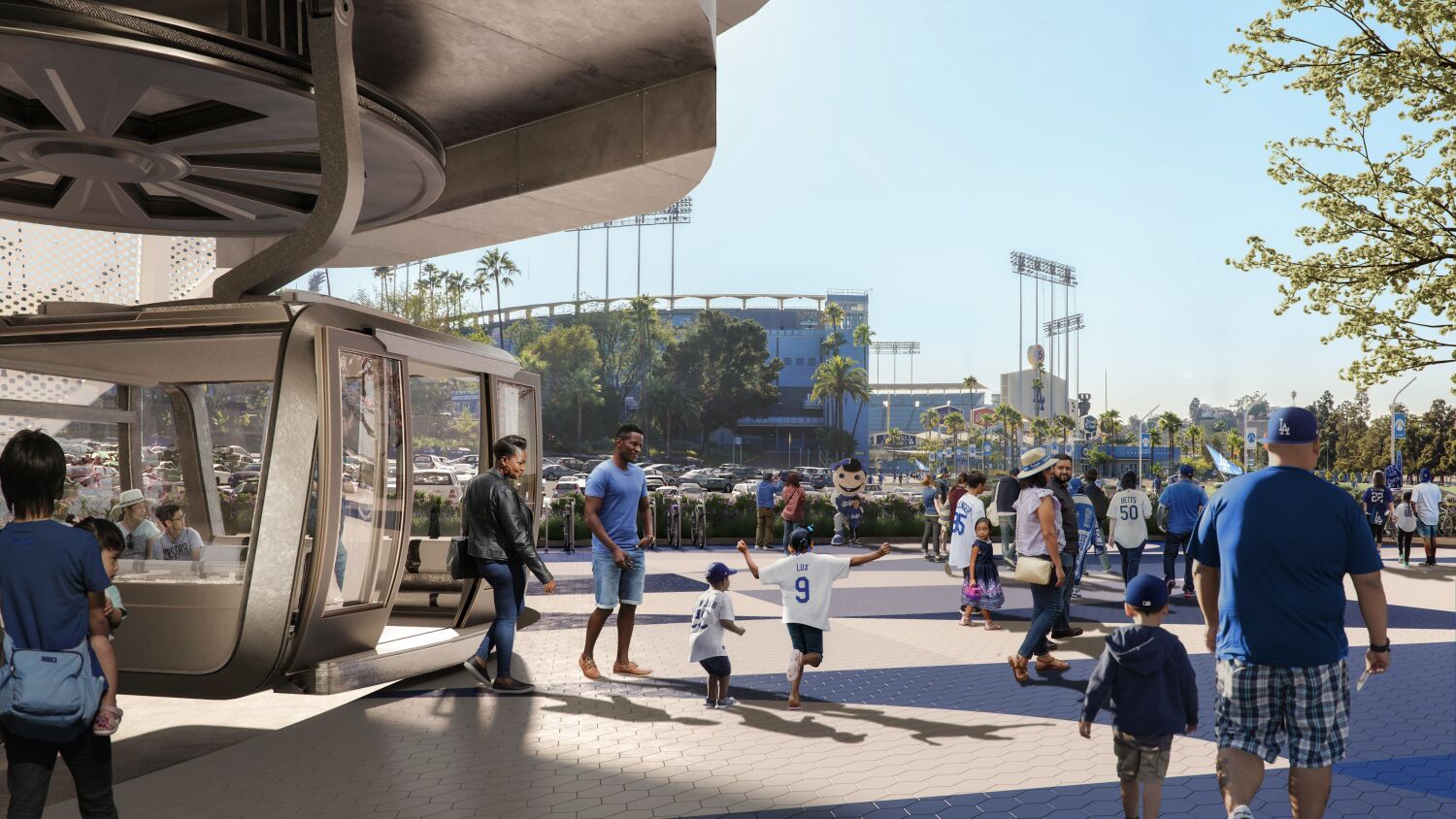 With expansive views of the Los Angeles skyline, a 1.2-mile gondola ride could bring tourists from Union Station to Dodger Stadium and reduce game traffic by the time of the 2028 Olympics, according to organizers.

But the promised seven-minute elevator, which would move up to 5,000 people an hour, is facing legal challenges and has just lost one of its biggest supporters — former Mayor Eric Garcetti, who championed the project on the Los Angeles County Metropolitan Transportation board Authority.

Mayor Karen Bass, who replaces him on the board, has yet to comment on the electrically operated gondola.

Chinatown neighbors and environmental groups opposed to the gondola proposed by former Dodger owner Frank McCourt are heartened by Bass’ decision to reverse a last-minute request by Garcetti to light the Hollywood sign.

“Mayor Bass could come in — she’s the city’s new mayor and has many appointments on the Metro board of directors — and she could do something different than her predecessors,” said attorney Doug Carstens, who represented Hollywood homeowners in their win.

Carstens also represents the California Endowment, a nonprofit group that is suing Metro over the project and asking a judge to stop it.

Superior Court Judge Mitchell Beckloff heard arguments in the case on Friday. A verdict is expected in the spring.

Attorneys for the California Endowment assert that Metro had a sweetheart deal with McCourt’s company, Aerial Rapid Transit Technologies, and did not pursue the public bidding process. They claim this is a private tourist attraction, not a public transit line for subway riders.

For its part, McCourt’s company said it did everything right.

This summer, the company announced it would transfer the project to a Climate Resolve nonprofit. The Los Angeles-based group aims to reduce pollution caused by climate change.

The gondola operation would likely be funded largely through corporate sponsorships and tourist fares, said Nathan Click, a spokesman for the group. But the financing plan is still being worked out.

“Angelenos are hungry for zero-emission transportation solutions that reduce traffic, reduce air pollution and improve accessibility in some of our most congested neighborhoods,” said Jonathan Parfrey, executive director of Climate Resolve, in a statement. “We will continue to work in partnership with community members and all stakeholders to bring this innovative project to fruition.”

The environmental review is ongoing. A public meeting is scheduled next week at Cathedral High School, a private school located near the proposed gondola trail.

The proposal, which first floated in 2018, has sparked fears in Chinatown.

Some residents have said they fear being forced out by rising property values ​​in a neighborhood where the median income is $36,000.

“This did not stem from a real community need. That’s a rich developer coming up with a project,” said Bill Przylucki, executive director of Ground Game LA, a progressive political organizing group.

He said the issue was on the group’s radar this year when organizers were courting councilwoman Eunisses Hernandez, who represents Chinatown and Elysian Park.

“It really is a tourist attraction. That won’t solve the traffic problems,” he said. “We’re concerned about the gentrifying impact.”

Supporters of the project say city planners need to think broader in the interest of the region.

Joshua Schank, senior fellow at the UCLA Institute of Transportation Studies and Metro’s former chief innovation officer, said projects like this are all too often derailed by “parochial interests.”

“It’s an absolutely amazing project from the perspective of the people of the region,” he said. “Very rarely do you have a project that has the potential to become iconic, serves a transportation purpose and is privately funded. These are very unusual circumstances.”

Schank headed an unusual department at the agency: the Office of Extraordinary Innovation, which initially accepted the gondola proposal. The department accepts unsolicited suggestions and can turn them into Metro projects.

It created Metro Micro, the agency’s Uber-like local service. And it introduced a new way of bidding, allowing private companies to bid to design the Sepulveda Transit Corridor connecting the San Fernando Valley to the Westside. Among the ideas under consideration is a monorail.

The gondola was one of the unsolicited private sector proposals that came through the office.

“Is this a project we should let a private investor build? And does that have a public benefit?” said Schank. “I absolutely think it has a public benefit. And from a bigger, broader perspective, it’s very hard to deny, the public benefit is huge.”

https://www.latimes.com/california/story/2023-01-09/challenges-loom-for-gondola-to-dodger-stadium-planned-for-the-olympics Challenges loom for gondola to Dodger Stadium planned for the 2028 Olympics

Rams' Baker Mayfield confident he is a starting quarterback