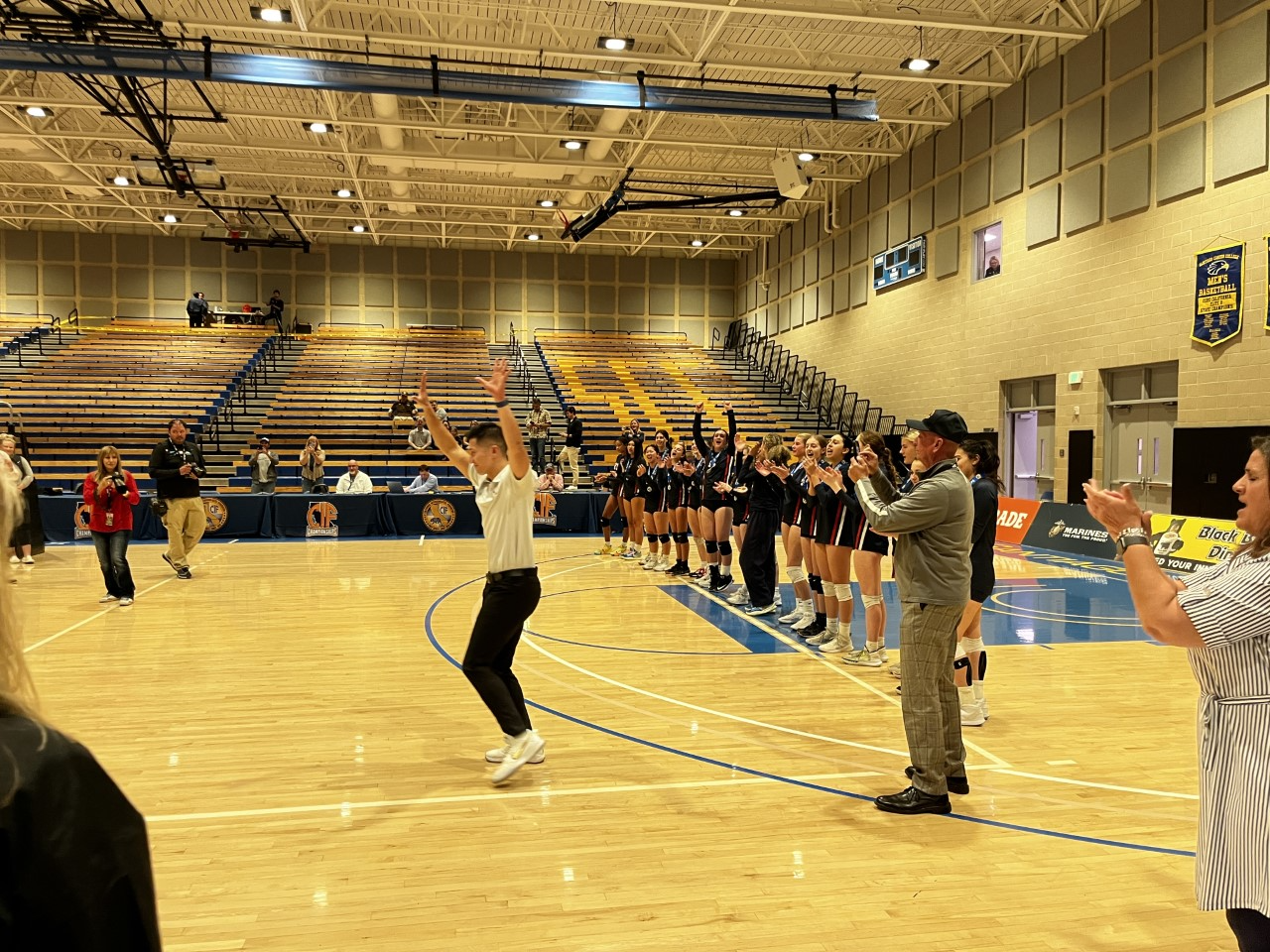 Keira Brady leapt from a spike, the ball hit the hardwood and head coach CJ Suarez felt his legs buckle.

There are few more energetic girls’ volleyball coaches in Southern California than Suarez, who gave his all for the West Hills Chaminade girls’ team for the last time Saturday night of the season. He pumped his fist for an ace in the second set. He gutturally screamed for big points, lifting his Gatorade trophy into the Chaminade crowd ahead of a match-winning fourth set.

So when Brady’s final spike secured Chaminade’s Division II Finals win over Fresno Clovis North, Suarez delivered one final two-handed fist pump – then collapsed to the ground as his assistants hugged him.

“It’s just like that, I can’t – all the weight has come off and I can move a little bit more freely, the season is over,” Suarez said of the fall to the ground. “It’s just crazy.”

An emotional year for Chaminade was capped with a Division II state championship on Saturday night as Chaminade capitalized on a turn in the third set to take Clovis North 3-1 (25-19, 13-22, 25-19, 25-22). hit. Junior Brady finished with 21 kills, while senior captain Danit Cohen — who got the biggest cheer after the game — often fielded them with 41 assists.

After a dominant opening set, Chaminade stumbled in the second, Clovis North blocking and digging every Eagle attack. But after trailing 7-4 in the decider, Chaminade began to string points together and energy in the stands began to build as Suarez raised his hand on every kill.

A decade ago, Suarez was a senior at Verdugo Hills preparing for a City Section Division 2 Championship against Jordan High. The Dons lost in three sets and the defeat stuck with the Chaminade coach. He went to college trying to make sense of his life, not sure if he would find his way back to a high school championship.

Saturday’s victory was a small personal redemption for Suarez. An indescribable feeling, as he put it. And that’s why he fell.

Buckley loses but proves it’s an up and coming program

Later, in preparation for Sherman Oaks Buckley’s CIF Division 3 State Championship match at Santiago Canyon College, she handed them out to a crowd of Buckley supporters. Some were curly. Some, like Wolfson’s and her grandmother’s, were sinewy. And they stood out comically amid a sea of ​​red buckley shirts and pom-poms in the stands, supporting their tiny 830-pupil private school in Sherman Oaks.

“There’s a feeling that history is being made … that we’ve come this far makes our school stand out,” Wolfson said as she and her grandmother smiled in the stands.

They didn’t finish a dream season as San Anselmo Williams won 3-1 (16-25, 25-22, 25-23, 25-23) in late sets to secure the Division III state title. But even as the Williams girls’ excited shouts echoed through the media room after the game, Buckley’s first-year coach Otis Glasgow stood his ground and urged his team to hold the second-place trophy for a minute.

“No team on the Buckley campus has that trophy,” said Glasgow, whose preparation and exuberance led Buckley to a 28-4 season that was the best program. “No team. No team… has this medal.”

In the middle of a tight second movement, the Williams audience chanted, “Who is Buck-ley!”

It has been her goal this season, said Wolfson’s daughter and 6-foot-2 center blocker Sophia Wolfson, to get Buckley’s name on the starting roster of California volleyball. And next season, Glasgow said, there is no cap on the program.

“Wherever, whatever division you’re in, if you play volleyball you’ll know Buckley’s name,” Glasgow said.

Shoppers look to save money on Thanksgiving dinner as prices skyrocket

Brad Marchand returns for Boston Bruins ahead of schedule