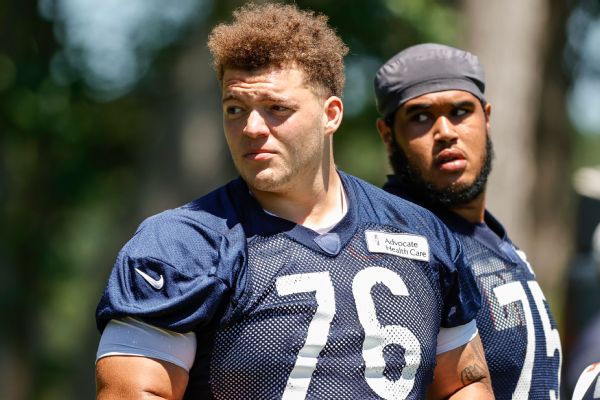 Jenkins, which is in a start-up phase, only participated in individual exercises. The sophomore lineman would not reveal details of his injury, including whether he injured himself during the team’s first practice session on July 27, whether he’s still battling back problems after undergoing surgery last offseason and what he’s recovering from currently recovering but estimated he should be 100% healthy in “a few days”.

“It feels really good and I don’t have any complaints at the moment so it’s really good,” Jenkins said after Saturday’s practice session. “If I had to give myself a percent, probably around 90 percent and it’s just getting my body back into the feeling of football and going back to 100 percent of ‘this is football’ and being ready.”

Jenkins said he had been in the training room for the past nine days and that his extended absence was due to “improving my health.”

His absence made itself felt at Halas Hall amid trade rumors about the second-round election. Earlier in the week, Jenkins responded on Twitter to a fan concerned about his whereabouts by “not believing everything you read” amid reports of mutual dissatisfaction between the player and the franchise.

“Mainly just one thing, that I got into arguments with coaches,” Jenkins said. “That was absolutely not true and I just wanted to say to everyone that you don’t have to believe everything someone says. It just is.”

During the first week and a half of practice, trainer Matt Eberflus declined to go into specifics about Jenkins’ absence, classifying the tackle as “daily.” Offensive coordinator Luke Getsy said Friday that Jenkins was present at team meetings and was “all in.”

Both Getsy and Eberflus claim that Jenkins is competing for a starting line spot on the offensive line and relayed that message to the lineman.

“Really, the same as everyone: ‘Get out there and compete. Everything is open. Dive in,'” Eberflus said. “Like I said, he was great in meetings. He was very observant. He was careful. He was back at the walk-throughs to look at the plays and understand his role and the plays.

Jenkins was drafted 39th overall in 2021 by former Bears general manager Ryan Pace. After undergoing back surgery prior to his rookie season, Jenkins was limited to 157 left tackle snaps last season.

Jenkins said he believes in the Bears organization and expects to be on the team during the regular season. “For myself, I’m a loyal guy,” Jenkins said. “The Chicago Bears, they drafted me, so I’m staying with the Chicago Bears until whenever the time comes.”

Jenkins was edged out in left tackles by rookie fifth-rounder Braxton Jones during the OTAs and moved to right tackles with the second team. On the first day of training camp, Jenkins got swing tackle reps and said he was ready to explore a move to guard.

“I’m ready to play wherever they want me,” Jenkins said. “I want to be here in Chicago, so I play where they need me to play.”

Jenkins’ return came on a day when Chicago finished its ninth practice at training camp with three of its top four wide receivers.

N’Keal Harry sustained a left ankle/foot injury during the first game of team practice and had to be carried off the field by teammates and coaches.

“I just saw him coming down,” Eberflus said. “I’ve seen the play and don’t really know much about there. We will of course do the evaluation and as soon as I have that we can give it back to you. And if it takes longer, we’ll let you know what it is. If it’s day to day, let’s say that too.

Byron Pringle and rookie Velus Jones Jr. were also absent on Saturday. Pringle, one of the Bears’ top free agent signings, has a quad injury and has no schedule for a return, according to Eberflus, though the team is optimistic his injury won’t rule him out for the regular season.

“No I do not think so. I don’t think so,” said Eberflus. “It’s longer than everyday, that’s all I can say, but no real timetable for returning. But we hope it’s a good situation for us.”

Jones Jr. is “going by the day,” according to Eberflus, who addressed concerns about the team’s wide receiver depth after starting without three players for the No. 2 and No. 3 wide receiver roles.

“Yes, you always worry about that,” said Eberflus. “You know, during camp, when you have this 90-man roster and the guys go down with some soft-tissue stuff or whatever, you put workloads on other guys. And these other guys have an opportunity. They have more reps, so that’s something to remember. And we were. We are thinking about that.”

WHO director general has been vaccinated against COVID-19