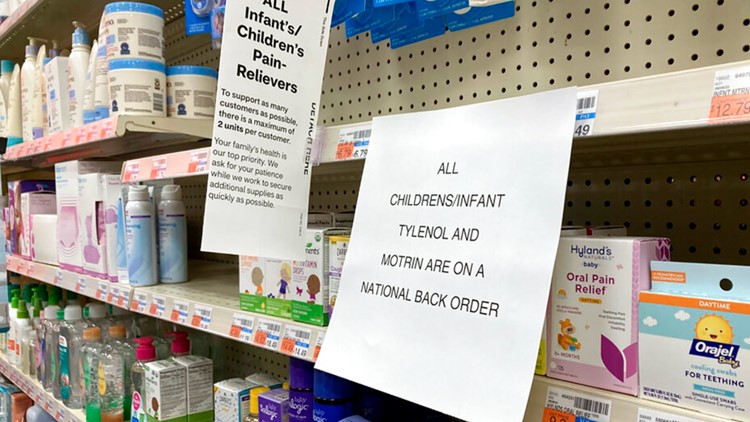 Doctors and other experts say the problem could last through winter cold and flu season.

NEW YORK — Recently, caring for sick children has become extremely stressful for many parents in the United States due to shortages of Children’s Tylenol and other medications.

Doctors and other experts say the problem could last through winter cold and flu season but won’t last as long as the recent shortages of baby formula or prescription drugs.

They also say that parents have alternatives if they find store shelves empty.

An unusually fast start to the annual flu season in the US, combined with a spike in other respiratory illnesses, has created a surge in demand for fever reducers and other products people can buy. without application.

Dr Shannon Dillon, pediatrician at Riley Children’s Health in Indianapolis, said: “At this time of year, more children are getting sick than we’ve seen in the past few years.

Experts say that is the main factor behind the shortfall, which varies from country to country and even within communities.

“At this point, it’s like toilet paper at the start of the pandemic (COVID-19),” Dillon said. “You just have to find the right place at the right time.”

Pharmaceutical maker Johnson & Johnson says it is not experiencing a widespread shortage of Children’s Tylenol, but the product may be “less available” at some stores. The company said it is operating the production line around the clock.

In the meantime, CVS Health has placed a two-product limit on all children’s pain relief products purchased through pharmacies or online.

Walgreens is limiting customers to six times buying online over-the-counter fever-reducing products for children. That limit does not apply in stores.

In addition to over-the-counter products, the prescription antibiotic amoxicillin is also in short supply due to increased demand, according to the Food and Drug Administration. It is commonly used to treat nasopharyngeal infections in children.

Check out the alternatives in the store first if some products are not available. Dillon says generic versions of branded products are “absolutely safe and often a much more affordable option”.

Other stores nearby may also have better options. Manufacturers say there are no widespread shortages of these drugs across the country, according to the Consumer Healthcare Products Association.

A GP can tell which stores have good supplies.

The doctor can also let parents know if they can try alternatives such as crushing the appropriate dose of the pill form and mixing it with food or chocolate syrup. Doctors say that parents or caregivers should not try this on their own, as determining the right dosage for children can be difficult.

“You don’t need to be tested at home,” said Dr Sarah Nosal, GP in the South Bronx. “Your GP wants to talk and see you.”

Doctors also warn that a fever doesn’t always need to be treated. They are the body’s natural defense against infection, and they make it difficult for viruses to multiply.

For example, Dillon notes that fever may not be intrinsically harmful to older children. However, parents should take an infant under 2 months of age to see a doctor if the child has a fever of 100.4 degrees Celsius or higher. And doctors say any child with a fever should be monitored for behavior changes.

Instead of medication, consider giving your child a warm bath. Cold water makes the body shiver, which can actually raise the temperature.

Nosal also says two teaspoons of honey can help control coughs in children over the age of one. Avoid giving honey to young children because it poses a risk of infant botulism.

WHEN WILL SUPPLY BE BETTER?

Shortages could persist in some communities until early next year.

Erin Fox notes that addressing them may depend on having enough workers at warehouses and stores to deliver products and stock shelves. She studies drug shortages and is the senior director of pharmacy at the University of Utah Health, which operates five hospitals.

Fox said there are no problems at the factories or shortages of materials contributing to the current shortage. Those setbacks could lead to long-term supply disruptions.

“I don’t expect this to last a year or so like some of our other shortages,” she said.

I bagged loads of underwear from Shein as it's so cheap... then a mortifying trip to the airport made me rethink things

The Spectacle of Grief Through Media

Column: Heed the warnings of this palm tree, a 200-year-old drought survivor