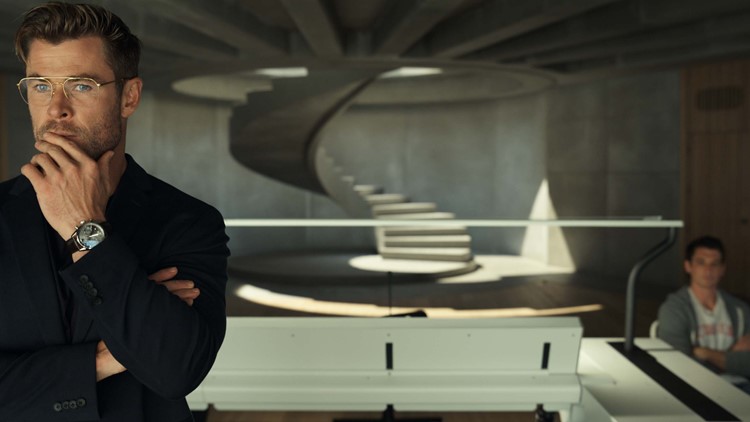 SEATTLE – Fans of dystopian thrillers with a sense of humor won’t want to miss “Spiderhead” on Netflix.

The film is set in a state-of-the-art prison and research facility where inmates are given a fairly comfortable life in exchange for agreeing to undergo mind-altering drug tests.

Chris Hemsworth plays chief researcher Steve Abnesti. Inmates are played by Miles Teller (Jeff, a Seattle Mariners fan) and Jurnee Smollett (Lizzie, who is harboring a secret). As they grow closer and their tests become more troubling, escape becomes their only option.

Entertainment reporter Kim Holcomb spoke to the cast about the making of the film.

SMOLLETT: “It’s not the obvious, but when I read the script I thought, ‘This is about unconditional love!’ It’s layered amongst those wacky, heightened, entertaining, and genuinely thought-provoking, genre-bending narratives. But deep down, they’re like these two unhappy lovers who won’t find freedom if they can’t forgive.

HOLCOMB: “Chris, I have to ask you about the phrase, ‘Beautiful people get away with too much and I’ll say I’ve benefited from it myself from time to time.’ Is that the biggest truth you’ve ever said on screen?”

HEMSWORTH: (laughs) “How am I supposed to answer that without looking like an idiot?”

HOLCOMB: “When Steve started dancing to ‘Slave to Love’, was that song actually played or did you imitate it?”

HEMSWORTH: “The song played, yep yep. The song was my choice and the dance, which I don’t think was scripted, was another opportunity to ridicule me.”

HOLCOMB: “Throughout the years, actors have told me that they have to love the characters they play. What do you think of Steve?”

HEMSWORTH: “Do I love him? Sometimes I loved playing him. I loved the kind of unpredictability about him, I loved that there weren’t any rules as to how or what to say or not say. There’s a real charisma to him, very strong. But a real lack of social etiquette and a misunderstanding of social cues. There is no filter for him.

HOLCOMB: I know it’s not remotely the point of this movie, but I’m in Seattle, we need to talk about Jeff. What is his backstory? Should he be from here? He’s also wearing an Edison baseball shirt, and there’s an Edison Washington.”

TELLER: “Yes, that’s definitely where the character comes from. He just felt like someone from the Pacific Northwest to me. Worked on boats, worked on cars, I gave him a mullet. I don’t know, this could be a Florida thing?”

HOLCOMB: “Miles Teller, what are you saying about us in the Pacific Northwest?”

TELLER: (Laughter) “I’m a baseball fan, so I knew he had to love the Mariners.”

TELLER: “Some of the scenes in it were pretty tough. I think you just have to commit, that’s what it boils down to.”

HOLCOMB: “How many times should people watch this movie to see everything?”

TELLER: “It’s science fiction and it’s George Saunders, so there are definitely some Easter eggs in it.”

“Spiderhead” will start streaming on Netflix on June 17th.

Marine veteran charged in shooting of CHP officer in L.A.

How ‘Avatar: The Way of Water’ can help give theaters a lift

Driver in crash that killed Chapman student may be charged