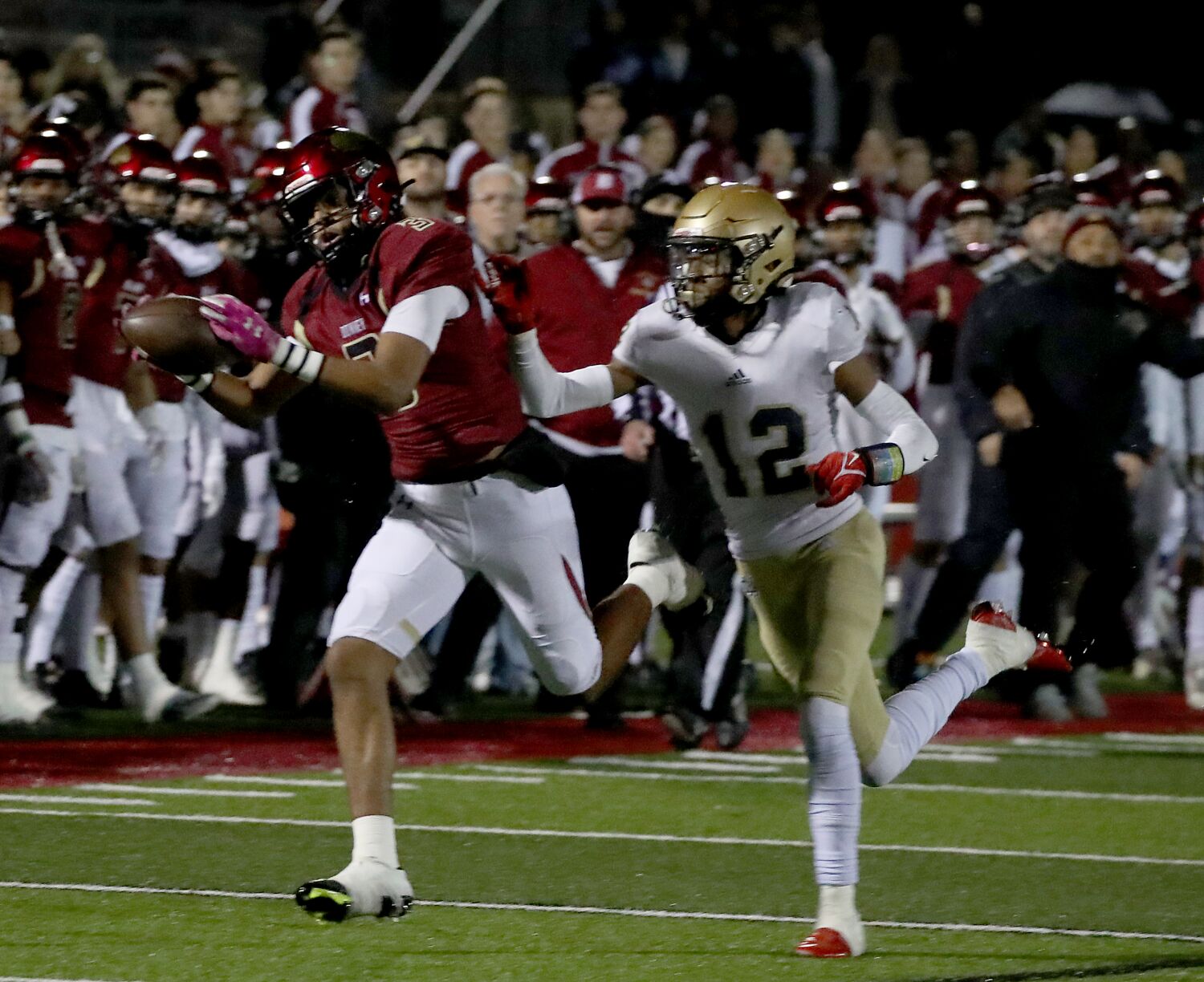 Aidan Chiles nodded to himself as he emerged from the sidelines, preparing for one last moment of heroism.

With his Downey Vikings a point behind and two minutes left, the Oregon senior got to work with the same attitude he’s worn all season. He fired routes and inched his team to the front of the field. He ducked, waved, threw off a third down pass for a first down. The stage was set, the end zone approaching, a win over Chula Vista Mater Dei Catholic and the Vikings’ first CIF regional title in program history were just yards and a field goal away.

And then a pass went wrong and a season was thrown away. Mater Dei’s DJ Overstreet salvaged a pass from Chiles to seal a 22-21 victory in the Division 2-AA CIF regional final.

Chiles threw off his helmet and slumped, facing coach Jack Williams as he came off the field.

“Coach,” Williams recalled Chile’s words, “I need a hug. I will cry. I lost it for us.”

But Williams tried to calm him down. He didn’t. And the Vikings wouldn’t be anywhere near that position without him.

After a broken arm ended a promising junior season, Chiles threw for 36 touchdowns in one of the best performances of any prep quarterback in the nation. When defense faltered and offense faltered with relentless wins all season, there were Chiles, Williams said, jumping around like a kid on the sidelines and telling his teammates they were making a game.

And he cooked for a quarter of an hour on Friday evening. First came a 40-yard pass to senior Bryant Carey for Downey’s first goal of the game, then a 35-yard smack down the middle to Ian Hernandez early in the second quarter to take Downey’s lead to 21-0. The defense did their job, intercepting two passes from dynamic Crusaders quarterback Dominic Nankil in the first quarter.

But everything went wrong.

As Downey’s offensive faltered, Mater Dei Catholic settled down. Nankil ducked into the pocket and found receivers. A touchdown pass late in the second quarter and a short run in the third put the game on a point early in the fourth quarter.

“I thought maybe we came out and instead of being us,” Williams said of the second half, “we maybe did some things that we tried not to lose the game with.”

And just as Downey seemed poised to thwart the win as Chiles backed them onto the field in the fourth quarter, the Crusaders intercepted a pitch-back trick play thrown by a Downey receiver.

“That was me,” Williams said. “I thought we got some momentum … like, ‘Hey, let’s try this and try to burst the bubble.'”

Moments later, Nankil rolled to the left and fired a bomb at receiver Rollin George for an 87-yard gain. Anthony McMillan ended the drive with his second score of the game. The Vikings’ energy evaporated, 22-21 – and then fumbled at the ensuing break-off.

The last drive from Chiles was too short. It was a bittersweet end to one of the most successful years in the history of the Downey program – but his legacy as Southern Section Division 4 champions, Williams said, was already sealed.

“I’m sure the guys will build on him,” Williams said of Chiles, “and what he brought to the program.”

Chiles hopes this is just the beginning.

“I hope they carry on that legacy, man,” Chiles said. “I hope they win CIF every year. I just want to come here and see other kids shine like we shined this year.”

Ashanti Claims Producer Tried To Sleep w/ Her in Exchange For Tracks!!