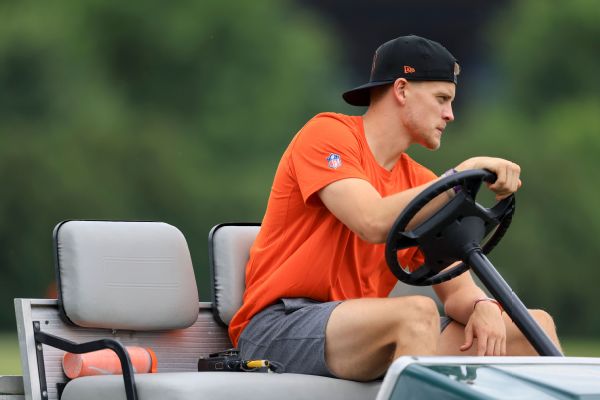 Bengals coach Zac Taylor said he has no timetable for Burrows’ return to the field.

“I hate putting a timeline on it,” Taylor said Friday. “But he’s getting a lot of good mental work right now.”

The third-year quarterback and top pick overall in the 2020 draft has not attended a practice session since the Bengals’ training camp began last week. But Burrow remains visible and active while preparing for the upcoming season.

Taylor said Burrow is involved in team meetings and even chairs some of them, as he did prior to Friday’s practice. When asked if Burrow could be used to signal playcalls like Arizona Cardinals quarterback Kyler Murray does during their respective camps, Taylor said it wasn’t necessary.

“He was very dedicated,” Taylor said. “I don’t think we need that to stimulate him. He’s doing it pretty well.”

Burrow was outside during two practice sessions with the team this week, watching the team practice on a medical cart. He drove the medical cart with the rest of the offense across the field at the end of Thursday’s practice, when the unit participated in light conditioning as punishment for losing a team drill against defense.

Taylor said Burrow has been very visible to his teammates, even if he hasn’t been able to fully engage during training camp.

“We’re excited to see him around,” Taylor said. “He’s our quarterback.”

Kim Kardashian and Pete Davidson break up after nine months

Angels players know they could be moved at MLB trade deadline

What is Niecy Nash’s net worth? Emmy Award-winning producer is set to host FOX’s ‘Don’t Forget the Lyrics!’