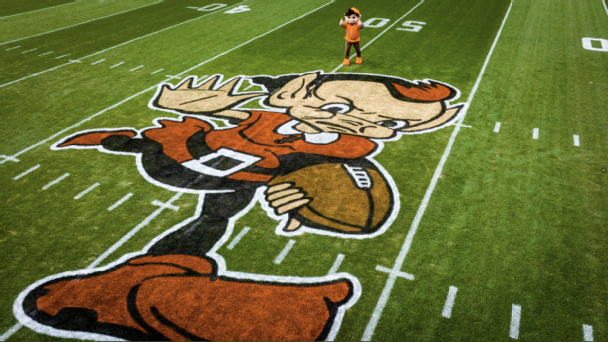 CLEVELAND — The Cleveland Browns will have a new midfield logo this season, and it’s an eleven. “Brownie the Elf” is an original 1940’s franchise logo. Browns fans voted for the eleven three more midfield optionsincluding two Browns helmets and an alternate version of Brownie.

“We are very excited about the new midfield logo,” said JW Johnson, Browns executive vice president and partner. “We really wanted to involve our fans in the process. … We really wanted to gain their involvement and hear what they had to say. We were able to pull the old-school brownie logo through the new logo.”

This is the first time the Browns have had a new midfield logo at FirstEnergy Stadium since 2016.

“We love the helmet logo, but Brownie has been around for a long time,” Johnson said. “I think people like him and we haven’t really presented him in the way we’d like. under me and [Browns senior vice president of marketing and media] Brent Rossi, we have decided to bring him back. It’s been well received.”

would you just watch it 🤩 pic.twitter.com/shcR27n0um

The Browns make their debut on Elf Sunday in their home game against the New York Jets.

'Fire Emblem Engage' is coming to Switch on January 20th

Arson fire 90 years ago leads to MLB in Seattle

With Germany’s big win over Spain, established powerhouses are running the show