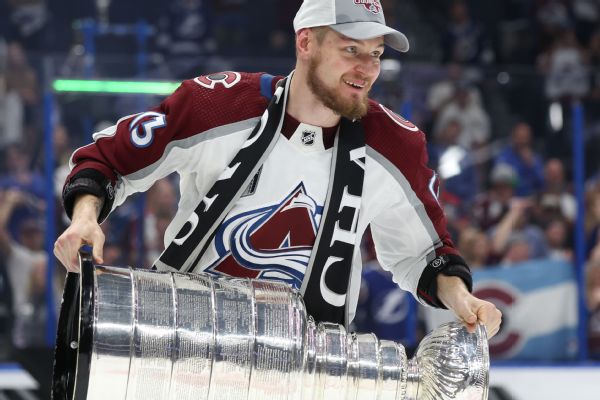 The contract is worth a total of $49 million with an annual average value of $6.1 million, sources told ESPN, confirming an initial report by The Athletic.

Nichushkin just had the best regular season of his career, scoring 25 goals and 52 points in 62 games. The 27-year-old was then instrumental in the Avalanche securing their first Stanley Cup championship since 2001 by scoring nine goals and 15 points in 20 games. Nichushkin also played through a gruesome foot injury in Colorado’s Cup Game 6, sustained in Game 5 against the Tampa Bay Lightning.

Colorado’s investment in Nichushkin comes just a few years after the winger retired entirely from the NHL. Nichushkin was drafted 10th overall by the Dallas Stars in the 2013 NHL draft and had a successful rookie campaign in 2013-14 with 14 goals and 34 points in 79 games.

Injuries plagued Nichushkin in his sophomore season, and his performance suffered over the next two seasons. Before the 2016–17 season, Nichushkin left the league entirely to join CSKA Moscow from the KHL.

After two years abroad, Nichushkin returned to the Stars for the 2018–19 season, producing just 10 assists in 57 games. Dallas then put Nichushkin on unconditional waivers and bought out the final season of his deal.

Then Colorado came into play. The Avalanche capitalized on Nichushkin, signing him to a one-year, $850,000 deal in August 2019. It was the perfect partnership between team and player, something Colorado coach Jared Bednar touched on often when Nichushkin surfaced during the Avalanche’s Cup run.

“We brought him in and his confidence was down,” said Bednar. “It’s built over the years and he is [become] such a big part of our team. What he does doesn’t go unnoticed in our locker room and by all the other guys. You know the role he can play in our success. It’s the system we play and what we ask of our players on the defensive side [that’s] a big strength of Val’s. He’s a big, long, strong guy who can skate.”

Nichushkin’s long-term deal could also signal that Colorado’s other big free agent – center Nazem Kadri – won’t be back. Kadri also had a career season (87 points in 71 games) and will be an unrestricted free agent on July 13. Several teams are expected to be interested in his services and the 31-year-old should command a big raise over his current salary of $4.5 million per season.

With focus on the future, Indian hockey team on a learning curve

Why Jeanie Buss is investing her own money in pro wrestling