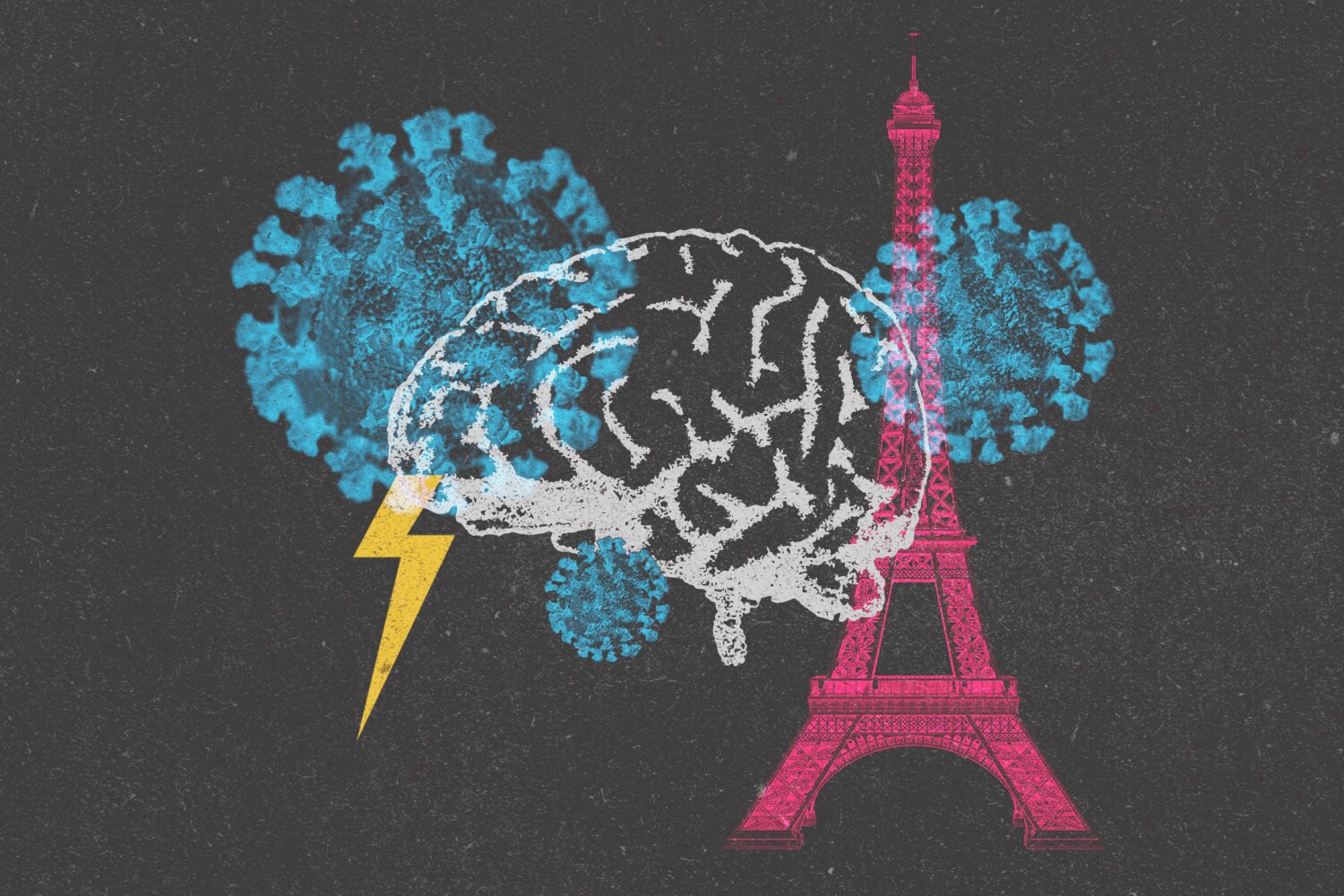 When people started talking about the COVID brain fog, I thought it sounded slightly ridiculous, like one of those diagnoses used in Victorian literature to cover everything from meningitis to menopause.

Unfortunately, brain fog is all too real and doesn’t get on little cats’ feet either. It slurps and slithers around in your head in big, smeared globs like a cornucopia of snails. Big and small, blur your mind, nibble on the syntax, chew your words until staring blankly feels like a perfectly sane answer to almost anything.

I know because I have it, I’m trying to write my way through what should be an adventure for all of us. But I’m a columnist and I just had COVID, and we all know that columnists who get COVID have a legal and contractual obligation to write about it.

I brought my COVID home from Paris, although the taxi driver who picked us up at Charles de Gaulle airport three weeks ago took one look at our masks and assured us that COVID has finally left the City of Light. C’est tout. Rien.

Paste a boilerplate here on how we wore masks indoors anyway (which we did), all got vaccinated and up to the legal maximum (which we were).

You’d think Parisian COVID was somehow fancier, but the symptoms that surfaced the day after I returned were shamefully mundane — the throat full of razor blades, the cough that made it worse, the stabbing fever and pounding head. The only thing vaguely French about it was inertia; Never in my life have I spent so many hours in a row. The chaise longue suddenly makes all sorts of sense to me.

I’m feeling a little better now. Yesterday I didn’t have the strength to open my laptop, and today I’m trying to wrest words from the snails—and wondering if, like Coleridge, I can coax poetry out of a fevered dream. As in “Kubla Khan,” my trip sparkles like a pleasure dome and echoes with cries of “Beware!”

It’s not like my family and I have lived in a bubble since March 2020, but we’ve had an unprecedented time in our home, making plans and canceling them as the pandemic ebbs and flows.

Having booked and rebooked this trip numerous times, we had high hopes for adventure and relaxation – a chance to take a breather from the insane friction of America’s culture wars, the ominous drumbeat of every newscast. While we weren’t ready to follow the Europhile throngs to homeownership in Portugal, we definitely wanted to be pleasantly overwhelmed by a city and culture that isn’t our own.

However, we didn’t expect it to be a version of Everything Everywhere All At Once. Between canceled flights, crowded airports, a French terrorism trial, an American terrorism hearing, a French election, Fashion Week, the fall of Roe vs. Wade, and our souvenir battle of COVID, it certainly felt like it.

It’s not just that, as the saying goes, you take your problems with you so much that there will always be problems everywhere.

To recap, LAX was a breeze, but we missed our connecting flight at Heathrow because British Airways was in the middle of labor negotiations, was understaffed and was canceling flights every five minutes, resulting in endless security lines. We were put on a late afternoon flight the next day and taken to a hotel airport where a sign – “Welcome British Airways Travelers” – seemed to indicate a more chronic problem.

Two weeks later we would be spending the night in a hotel at O’Hare Airport as our connecting flight had been canceled due to mechanical problems.

In between, of course, Paris, especially in June, when the sun sets at 10 p.m. and rises again a few hours later. Gorgeous, fearless and yet anything but unchanged. Notre Dame remains fenced off and adorned with scaffolding and cranes; Rebuilding after the devastating fire of 2019 is expected to take another two years.

About a block away, the heavily touristed sidewalks in front of the Palace of Justice were blocked by barricades and dozens of heavily armed police officers. At the Palais, 20 men were on trial for their involvement in the 2015 Paris terror attacks, including the Bataclan theater bloodbath that killed 150 people; They were found guilty on June 29.

Meanwhile, the city was invaded by models and celebrities for Men’s Fashion Week (we watched a stage rise at the foot of Sacré Coeur and if I’d known Audrey Tautou would be walking on it hours later I’d have a way found to stay ). It was also rocked by an election in which President Macron’s centrist party lost its legislative majority, while the far-right Rallye National won 89 seats. Stagnating wages, rising gasoline prices, and an increasingly fragmented notion of national identity aren’t just American problems. But, hey, Billie Eilish posted just blocks away, and isn’t that Thomas Brodie-Sangster and Talulah Riley strolling past Le Bon Marché?

We were on a train back from a visit to Versailles when I learned that the Supreme Court had stripped women of their constitutionally protected reproductive freedom. I had spent the day reflecting on the tipping point between autocracy and revolution and the often mocking nature of the story – Versailles is a monument to privilege, but also to the blind certainty that privilege is God-given and eternal. Yet there we were, the unwashed masses, queuing for sandwiches and crepes at the stalls that dotted these lush gardens as the war between the people and the powerful has moved elsewhere.

France was quick to denounce the Supreme Court decision; President Macron’s party promised to propose a bill to include abortion rights in the French constitution. “What happened elsewhere must not happen here,” he said. Even far-right leader Marine Le Pen seemed to agree.

It stirred in a bittersweet way — the country that mirrored our revolution picked up the banner we dropped — but how exactly do you comfort your daughters when they come to terms with the fact that the Supreme Court was stripped while they were on furlough giving them the right to decide what happens to their own bodies?

So getting COVID wasn’t the worst thing that happened during our trip. On the contrary. In a way, the exhaustion and brain fog provided a respite that even Paris couldn’t. I know I can’t sleep forever, but part of me is thankful that I can sleep at all.

We don’t believe very much in recovery in this country. Gone are the days of rest cures or treatments that involve a month in the backcountry. “Up and at ’em” is our motto, a national policy to overcome the pain codified in too many workplaces that don’t offer sick pay and in the minds of too many people who work in industries that do.

As my colleague Emily Alpert Reyes just pointed out, denying ourselves the rest needed to truly recover from COVID can often make the disease worse. And not just COVID.

We have all been dealt a number of severe blows in recent years; we are all exhausted and in some stage of illness. We all need rest, time and space to relax.

Lying on my sofa feels the fight against exhaustion, the brain fog almost heals. For a few days I couldn’t find any energy for indignation, anger, or fear; I could only croak requests for chicken pho and rewatch another episode of “The Crown.” Everything that happened in the past few weeks, the previous months seemed a long way off. Although apathy is not my natural state, it was restorative in its own very strange way.

Being ill always makes one grateful for health when health returns. I’m glad I went to Paris despite catching COVID even though I didn’t find the escape I thought I needed so badly.

Instead, I was reminded that I’m also a citizen of the world – and that, like Coleridge’s Xanadu, this world is both sacred and enchanted and a wild place. When we get knocked down, we need to get back up, but we also need to give ourselves time to suffer and then heal. We cannot fight in the fog.