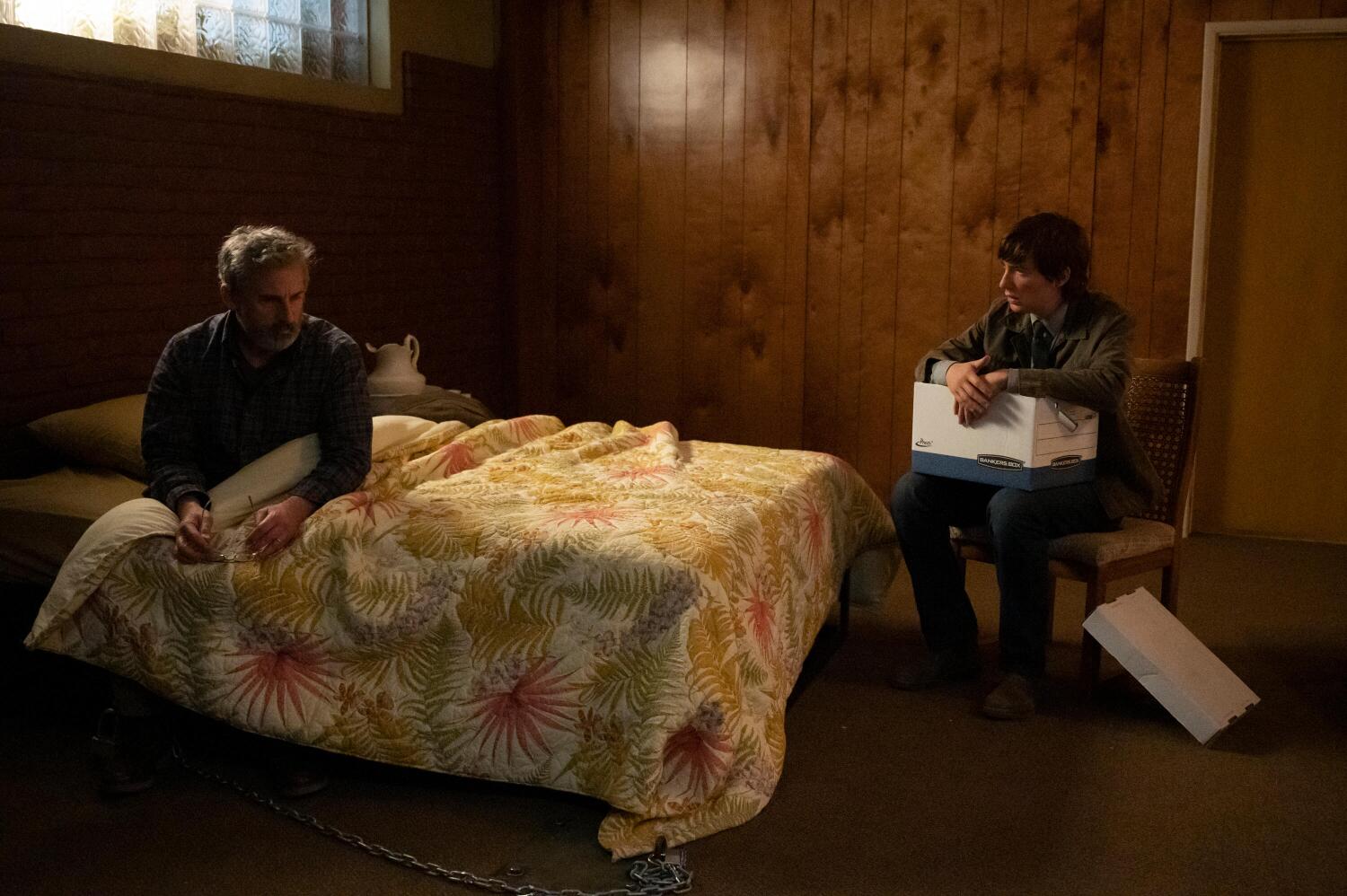 In FX for Hulu’s new limited series, The Patient, Sam Fortner (Domhnall Gleeson) kidnaps and imprisons his therapist, Dr. Alan Strauss (Steve Carell) in hopes that Strauss can cure him of his murderous compulsions. The story can and has been described in many ways – a psychological thriller, a dark comedy, part of the recent therapy show trend but with the ever-popular serial killer twist.

As I watched, however, I couldn’t help but think that this was the first real sighting of this elusive trend we’ve all wondered about for the last two years — the post-pandemic narrative.

In mid-2020, as even people who weren’t epidemiologists began to realize that COVID-19 wasn’t going to go away or even become manageable within weeks or months, there was a lot of talk about what kind of visual storylines would emerge from that period of disastrous ones Mortality rates, global fear and near-universal closures.

There was of course an immediate effect. When film and television production ceased, all manner of Zoom reunions, series, and films sprang up to fill the void. Much of it was time-specific – visions of the entertainment industry gathering to lift the spirits (remember John Krasinski’s “Some Good News”?) and to prove that the show must go on (how adorable was it when Evie Colbert appeared in removed episodes of “Late Night With Stephen Colbert”?). Some of these tracks, like “Coastal Elites,” faded with their own immediacy, while others might stand the test of time — “Host,” a remote-controlled horror film, was and is very scary.

Eventually, production resumed with social distancing measures that resulted, among other things, in an unusual number of scenes with three or fewer people in them and shows like The White Lotus being confined to a single, secluded location.

Some shows, including Grey’s Anatomy and The Morning Show, chose to include the pandemic in their storylines, but most didn’t. Post-apocalyptic series, including Station Eleven, suddenly seemed prescient, even if they’d been written when COVID-19 was still a glimmer in a bat’s virus-infected eye.

Beyond the logistics lay a bigger question: What kind of stories would emerge from the horror, social catastrophe, and all of the deeply personal fallout from a pandemic?

Perhaps one where a man is locked in a bedroom where he is forced to work to the extreme while constantly worrying that the creature that randomly kills people in the outside world might end up killing him?

Or am I projecting?

I reached out to the show’s creators, Joe Weisberg and Joel Fields, and asked if “The Patient” was in any way an allegory for the pandemic or if I was crazy. As you might expect from the writers of a therapy-centric show (or spy drama The Americans), her response was maddeningly opaque; they don’t want to “make their own definitive statement on some things that we are very happy to leave up to interpretation”.

In other words, how does it do she Feeling?

Well, it makes me feel many things, many of which are disturbingly reminiscent of the trauma we’ve all been through. If “The Patient” isn’t a skillful attempt to turn the intimate relationship between a killer and his enemy into a commentary on the pandemic, then it inadvertently hits many advocative tones.

“The Patient” is not filmed on Zoom, or even in the bedroom where Strauss is chained. While essentially a two-handed device, it’s not as closed off as, say, In Treatment. There are other characters – Sam’s mother (Linda Emond), Alan’s wife (Laura Niemi) and son (Andrew Leeds) – and we see Sam at work and later Strauss’ family looking for him.

But when Strauss tells Sam early on that his plan won’t work because therapy requires a safe space and not one filled with threat and fear, it’s difficult not to hear the fear of workers of all kinds as we lost control of ours everyday life trying to get on while around us people were getting sick and dying.

While not literally chained to the floor, many of us woke up one morning to a world confined to the confines of our homes and, like Strauss, dependent on supplies of groceries and other necessities. (Sam’s delight at the takeaway he offers his prisoner each night mirrored our pandemic gestures on the silver lining – hey, let’s all support our local restaurants by eating more takeout!)

The sudden detachment from ordinary outside life forced and/or allowed many to examine their own psyches with a thoroughness impossible in the hustle and bustle of the old days. That’s the point of The Patient, which is so interior that its interiors have interiors. Strauss not only reminisces about his family, including the conflict surrounding his son’s transition from Reform to Orthodox Judaism. He also introduces himself in Auschwitz and in conversation with his own dead therapist (David Alan Grier).

The story revolves around Sam’s belief in a quick turnaround; the identified problem is now solved at lightning speed by the expert he has mediated. He is shocked to learn that the trial will take years, not weeks, not months.

That’s where many of us found ourselves in 2020 and 2021 and 2022. Almost three years since COVID-19 began infecting people, we’re still trying to balance our desire to be “normal” with all the effort, time, and setbacks that come with it.

Obviously this could all be in my head, just like so many things are all in Strauss’ head or Sam’s head. But even Sam’s impulse to kill feels very… contemporary. While it doesn’t take a therapist to realize that Sam’s compulsion stems from years of abuse from his father, he may be the first serial killer sparked by personal irritation.

He is less interested in the act of killing than in the need to take revenge on those who have offended him. People who have demeaned him with words, looks, or actions, or who have done things that he doesn’t think are fair.

In that sense, Sam is a product of the complaint culture; Say something he doesn’t like or give him a weird look and he’ll kill you. Strauss wonders if Sam isn’t looking for a reason to be offended, reminding him that offense can often be unintentionally or misconstrued — and even when it’s not, “we’re all broken vessels” who act as people deserve attention.

A culture of grievance certainly existed before the pandemic, but it has been fueled by disagreements over basic science, public policy and underlying political divisions. Still mired in the tragedy and trauma of the pandemic, we are all thrashing about at some level, searching for a single source of our pain in hopes of resolving it. If the ensuing surge in general anger and mass shootings is any indication our year or so of enforced distancing didn’t get our hearts beating.

In the case of Strauss, however, it was. The brightest thread in The Patient (aside from many moments of clever writing and very fine acting) is the sight of the doctor healing himself. Just as the pandemic has exposed many harsh truths about inequality at work, the demands of parenthood, hustle and bustle culture and attitudes towards mental health, Strauss’s time has left him in mortal fear, the story he tells himself about his own relationship has told to re-evaluate work and family, particularly the estrangement from his son.

Many of those who reviewed “The Patient” had issues with its length. Although episodes last 30 minutes or less, the story feels a bit lengthy and occasionally repetitive with no clear ending in sight.

Which of course only confirms what I said.

When: At any time

https://www.latimes.com/entertainment-arts/story/2022-08-31/column-in-the-patient-a-full-blown-allegory-for-the-pandemic-or-is-it-just-me Column: Is FX’s “The Patient” an allegory for the pandemic?