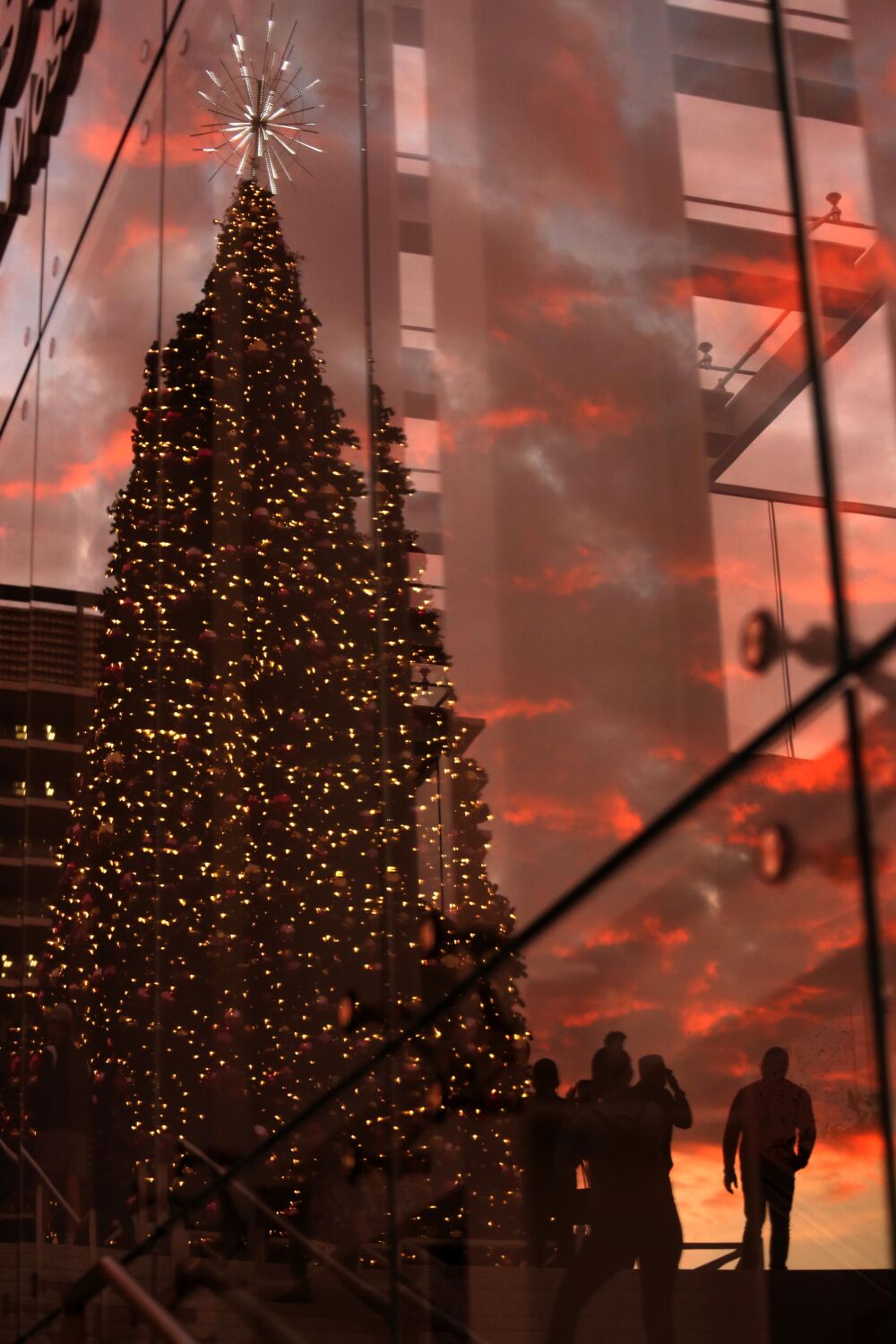 This is the time of year I hear from readers looking for recommendations for tax-deductible charitable giving, and it always makes me nervous.

I usually tell them that you can’t go wrong by supporting established nonprofits like LA Family Housing, People Concern, St. Joseph Center, Homeboy Industries, the Midnight Mission, and several other organizations that provide all kinds of human services to those in need provide.

But for every cause I recommend, there are hundreds I leave out. So I thought I’d change things up this year and ask readers who they’d like to donate to.

Get your checkbook ready because you’re about to hear from Flea from the Red Hot Chili Peppers, Doors drummer John Densmore, mega-bestselling crime writer Michael Connelly, and a few not-so-famous folks.

But first some perspective.

Thanks to inflation and economic uncertainty, many foundations and individuals are being cautious about giving this year, said Lorena Sanchez of the Downtown Women’s Center (which is certainly a good thing). So every little helps, especially as the same economic forces amplify the struggles of so many people.

“The need is greatest for families who come to us,” said Rev. Andy Bales of the Union Rescue Mission. “There are families in our gym, families in our chapel, and we’ve had to accommodate families in hotels to fulfill our promise of never turning away a family.”

So URM is certainly for a good cause, and it just lost a key donor this week when Scott Minerd, CEO of Guggenheim Partners, died of a heart attack at the age of 63.

But let’s move on to some other worthy beneficiaries.

When I asked Doors drummer Densmore if he had any favorites this time of year, he came up with three very different ones.

Liberty Hill Foundation because it has “promoted criminal and environmental justice for many years,” Densmore said. Tree People because they “have been planting trees for many years”. And Tia Chucha’s Centro Cultural & Bookstore in Sylmar, a local treasure that Densmore has supported for years.

Incidentally, Tia Chucha’s is the favorite charity of two of the people who started it two decades ago, when access to books and heritage programs was scarce in the northern reaches of the San Fernando Valley.

“We’re donating as much time, money and energy as we can,” said Trini Rodriguez, speaking for herself and her husband Luis, the acclaimed author and former Los Angeles Poet Laureate. Tia Chucha’s offers a range of educational programs and live performances, it’s a meeting point for both children and adults, and donations keep the place alive.

“Bees don’t care about Democrats or Republicans,” Zuma Jay said. “Your only mission is to feed us all.”

Azul, an environmental justice organization that has spoken out on various coastal access and protection issues; the Organic Soup Kitchen, which provides meals for low-income people and those living with cancer and chronic diseases; and the Santa Barbara Wildlife Care Network, which rescues and rehabilitates injured animals in Santa Barbara and Ventura counties.

Former LA Mayor Antonio Villaraigosa called Peace Over Violence “a great nonprofit organization that works with victims of domestic violence.” Founded more than 50 years ago, the organization provides victims and their children with free medical and psychiatric services, legal aid and emergency shelters.

Flea didn’t hesitate when I asked him if he had a favorite thing.

“Yes, my favorite charity is my music school, the Silverlake Conservatory Of Music, because it’s community-based, teaches the kids directly and non-bureaucratically, creates a social hub, provides jobs for teachers, and improves the neighborhood place,” Flea said.

After a tough spell at the height of the pandemic, Flea said the school is once again able to teach 800 children a week. And there is a scholarship program for students who cannot pay for tuition and instruments.

Author Connelly and his wife Linda introduced my wife Alison and I to Wags and Walks, a non-profit organization that rescues dogs and finds homes for them (we are looking for adoptions). If you are an animal lover this is one of many organizations you may want to support.

The Connellys had two other recommendations:

“My boyfriend’s house in Hollywood. If homelessness is this city’s biggest problem, then programs that bring self-sufficiency and stability to homeless youth are a noble mission,” said Michael. “We also support BINC [Book Industry Charitable Foundation] and its efforts to support independent bookstores that have been hit hard by the pandemic.”

Steve Whitmore, public information officer for the LA County Assessor’s Office, supports Midnight Mission because “they have a solid track record of helping alcoholics and addicts get clean and sober and off the streets. … In the early ’60s and ’70s I was on the road, so I can understand that.”

Former police officer and councilman Joe Buscaino recommends San Pedro’s Beacon House as “one of the most credible and reliable drug and alcohol rehabilitation programs in the city.” Buscaino also made pitches for the LA Harbor Boys & Girls Club and its college prep program, Harbor Interfaith and its homeless utilities, the East Side Riders Bike Club (volunteers who do community service and keep kids out of gangs), and Operation Progress in Watts.

Rick Caruso, the contractor and businessman who lost his mayoralty to Karen Bass, assisted Buscaino with Operation Progress and its focus on underserved youth in south Los Angeles. Caruso said that he and his wife, Tina, donate to various causes throughout the year, but during the holidays “we’re particularly committed to Operation Progress and Para Los Niños, another youth enrichment program for underserved families.

Bernard Parks Jr., son of the former LAPD police chief and city councilman, has a cause close to his heart.

“The staff at Children’s Hospital are extremely remarkable,” said Parks, who lost his 4-year-old daughter Ayah to cancer in 2016. “The care CHLA gave her was second to none.”

Meg Shimatsu was living in her car in the parking lot of a Glendale hospital where she was undergoing dialysis when I wrote about her in 2017. She has been housed since 2018 and is still awaiting a kidney transplant. If she had money to donate, Shimatsu said she would give it to Friends in Deed.

The Pasadena nonprofit operates a pantry, does street work, and runs a safe haven called the Women’s Room, which helped provide housing for Shimatsu.

“Without her, I would probably still be homeless,” Shimatsu said.

Eagle Rock’s Jane Demian, a volunteer with the SELAH Neighborhood Homeless Coalition, supports the ACLU because “our civil liberties are under attack” and the National Lawyers Guild because of her advocacy for housing “as more and more renters are losing their homes and… become homeless.”

Jose Razo grew up in the San Fernando Valley projects, became a US Marine, and later served as principal at Telfair Elementary, where I portrayed him and some of the school’s nearly 25% homeless students.

Razo, now an LA Unified administrator, said one of his favorite charities is DIY Girls, which was founded by assembly member Luz Rivas (a former Telfair student) to educate and mentor girls interested in science , technology and engineering interests. Another is the Cervantes Social Justice Fund, which supports elementary school students and families in need in Pacoima, San Fernando and Sylmar.

Lawrence Tolliver, owner of the legendary South LA barber shop I’ve written about so many times, said he has two thoughts at the time of giving. First enter Brotherhood Crusade, a South LA-based youth development program. Second, donate blood. One way to do this is to search the Red Cross website for a donation center near you.

Jasmyne Cannick, a journalist and gay rights activist, said “the charity I care deeply about” is a safe house in Jamaica “that shelters and hides queer Jamaicans” until they can flee a country where Homophobia and violence against LGBTQ people are widespread. Cannick has covered this in print and on a podcast called Ring the Alarm.

Palos Verdes developer and businessman Jerry Marcil said he grew up poor and couldn’t afford a week’s camp with the YMCA.

“They told me that if I sold two boxes of peanuts door to door, I would earn my way to camp,” said Marcil, who later learned that the majority of his bill for the week came from donations to the Y.

“I’ve remained loyal to the YMCA ever since,” said Marcil, who is now on the board of directors of the Metropolitan Los Angeles YMCA and chair of fundraising for the South Bay Y.

Can you guess his favorite year-end charity?

My apologies to all the good causes I couldn’t accommodate this time, but maybe we’ll do it again next year.

Meanwhile, whether you are on the giving side or the receiving side, happy holidays to you.