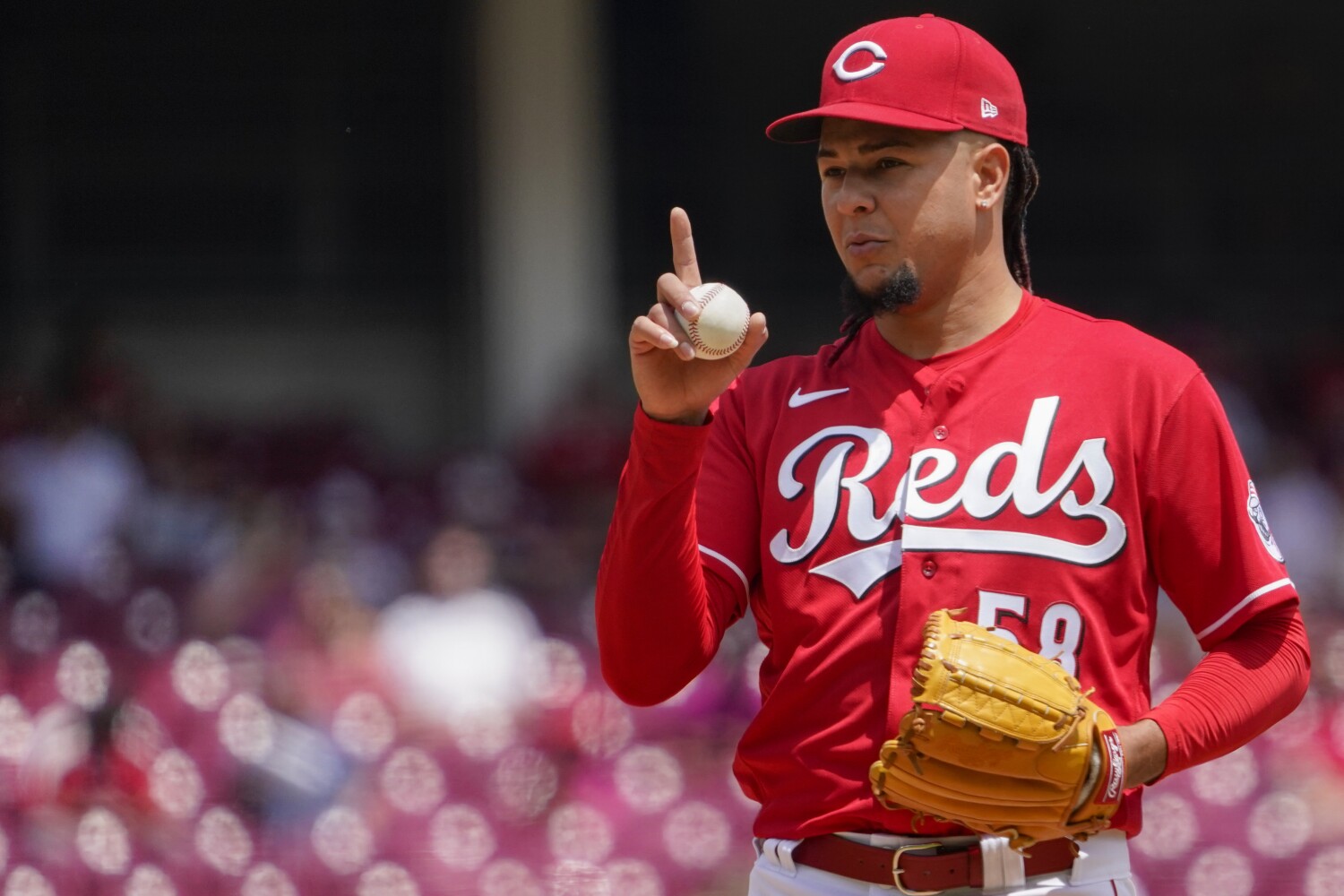 A chant erupted from the outfield pavilions during the fifth inning of Tuesday’s All-Star game at Dodger Stadium.

It was aimed at outfielder Juan Soto, the Washington Nationals star who’s suddenly and famously on the trade bloc and could go to you-know-where.

At the same moment, standing on the mound was a seasoned veteran who is far more important to the Dodgers but was still completely ignored.

His name is Luis Castillo, he plays for the Cincinnati Reds and he could be quietly filling the Dodgers’ biggest hole these last two weeks before the close.

First Castillo, then Soto, and all the world’s public begging isn’t going to change that.

The Dodgers won’t say, but they seem to agree. Just listen to manager Dave Roberts Thursday before his pitching staff gambled away a five-run lead against the San Francisco Giants, only to be saved by Trayce Thompson’s triple and Mookie Betts’ homer in a 9-6 win.

When I asked Roberts if his team pitched enough to win a championship, he smiled.

But… well… then he stopped smiling.

“I know where you’re going in the sense that to win multiple seven-game series, you have to have innings and starters,” he said. “You have to have people who can go deeper into games.”

The Dodgers aren’t sure they have enough of these guys to survive three October series. While the Dodgers starters are the best in baseball — leaders with a 2.77 ERA and a .214 batting average — there are too many question marks surrounding those exclamation points.

Clayton Kershaw is the born-again ace with a magical season, but he’s always just a touch away from doom. He’s 34 but at a pace to pitch his most innings in three years.

Julio Urias should be more consistent this year, but he’s still dogged by the occasional bomb attack, and few will forget his 10.50 ERA in two appearances in last year’s National League Championship Series loss to the Atlanta Braves.

Tony Gonsolin was the surprise of the league in the first half with an 11-0 record and a 2.02 ERA, but he’s already surpassed his previous high for pitched innings and he was terrible in the postseason with a 9.45 ERA. He goes unproven in big moments, look at the three runs allowed in an innings as he suffered the All-Star Game loss.

“I think Tony’s mentally strong, so I don’t think that’s going to upset him,” Roberts said of the mammoth home runs by New York Yankees’ Giancarlo Stanton and Minnesota Twins’ Byron Buxton against Gonsolin. “Yeah, I would have liked to have gone scoreless and he’s only throwing 10 pitches, but that wasn’t to be. But I don’t think that will affect him in the future.”

Then there’s Tyler Anderson, who has much the same story with a surprising 10-1 record and 2.96 ERA but little postseason pedigree. He has appeared in only two career playoff games.

Surely the rotation will be greatly enhanced with postseason ace Walker Buehler returning from an elbow injury and brilliant young Dustin May returning from elbow surgery. But while both are expected in September, the Dodgers can’t reasonably factor them into their October plans.

“Two guys who sustained serious injuries, I don’t think anyone can bank [on] it,” Roberts said of her return. “But that’s sort of our hope, I think.”

You must do more than hope. You need to strengthen yourself. Above all, they must remember it.

Last season’s inspiring postseason victories against the St. Louis Cardinals and Giants were wiped out by an incipient pitching meltdown in the NLCS against the Braves. With Kershaw injured and Urias confused by his erratic deployment, they basically had Max Scherzer, Buehler and the Bullpen.

Scherzer was out, Buehler was burned out, and the Braves won the series against a Dodgers team that used Corey Knebel and Joe Kelly as starters.

Granted, the Dodgers bosses mishandled the whole mess, and the Giants’ five-game streak exhausted the Dodgers before they even set foot in Atlanta, but the team never recovered from not pitching enough would have.

That can’t be an excuse this year. You can see it coming. You know what to expect. They have the prospect of fattening their rotation, so they must capitalize on it. These are the same kids – the Diego Cartayas of the world – that everyone is touting as currency for a deal for Juan Soto.

Luis Castillo is a 29-year-old right-hander who has had a career 3.62 ERA in six seasons for the terrible Cincinnati Reds. Last but not least, the guy knows how to fight his way through adversity.

This season is his best, a 2.77 ERA in 13 starts with 82 strikeouts in 78 innings. He’s likely traded because the Reds are rebuilding and he’s coveted throughout baseball, but few teams can offer young talent like the Dodgers.

I’m guessing they have their eyes, computers, and radar guns on Castillo, and they’re more likely to hunt him down than go after Soto.

“Our guys are always trying to find ways to get better,” said front office officer Roberts. “So if there’s an opportunity to do better on the pitching front, we’ll act on it.”

Roberts stressed his confidence in his current starting team and stated he was ready to stretch run with them.

“What we have in the space, I believe in every one of these guys,” he said.

It’s one thing to believe and another to know, and the Dodgers know it.

Juan Soto is nice. Luis Castillo is a necessity.

Thai Taco Tuesdays at Anajak make it restaurant of the year