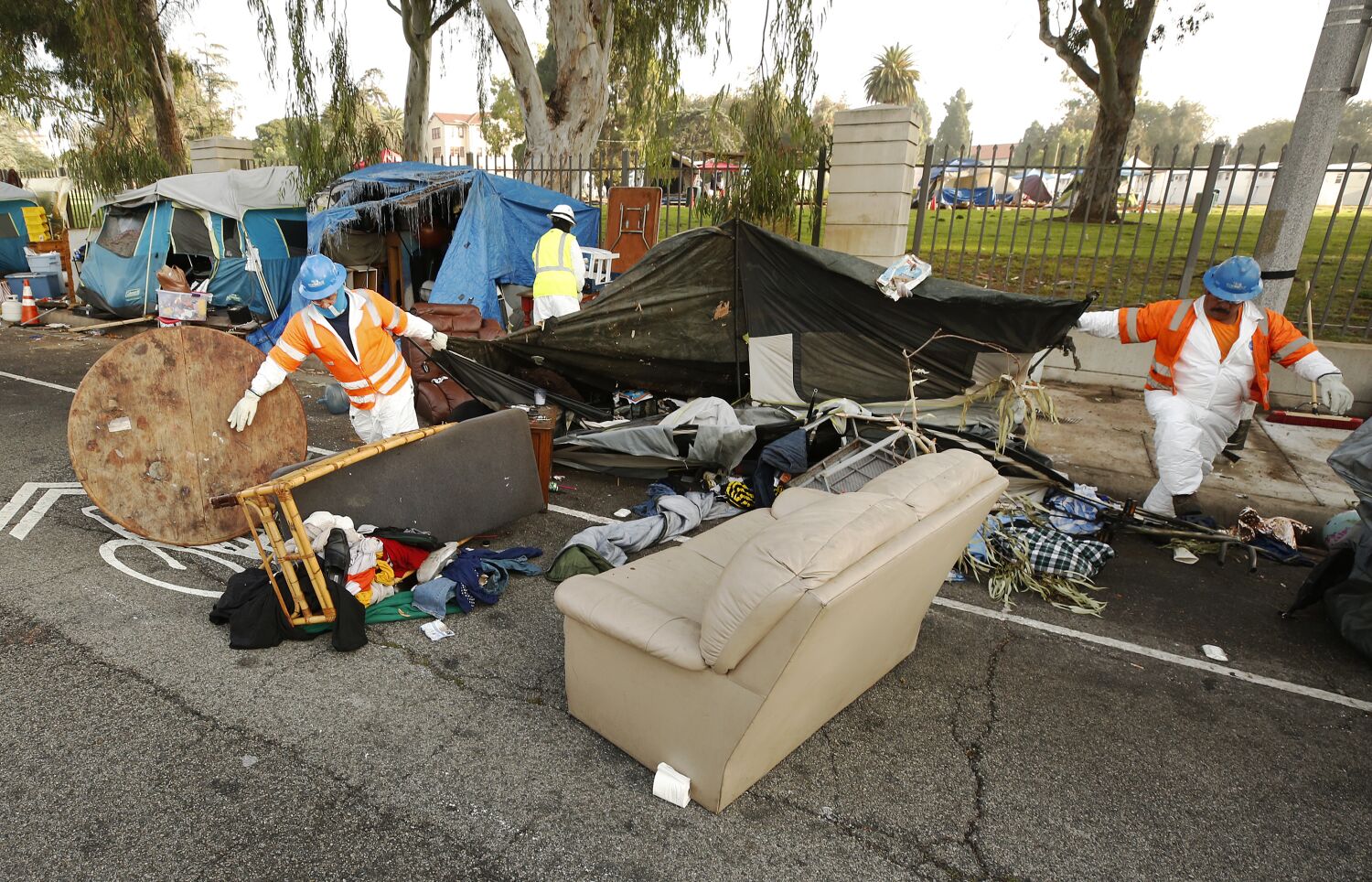 A few weeks ago, Governor Gavin Newsom made headlines by opposing every plan of action for the state’s homeless – withholding hundreds of millions in funding and urging local leaders to do more to get people off our streets.

He called mayors and leaders from across California to a very serious meeting in Sacramento — no bagels, no coffee, not even free bottled water — to discuss exactly what it would take to get their money.

These locally elected officials, few wimps themselves, also had a few ideas for Newsom, some of which were unfit for printing. There was more than a little resentment against the governor for what some called a grand and others a disingenuous political move, given that the very plans he opposed had been formed under government direction.

And there is much resentment that the state has not taken clear leadership on this issue.

“When you took away our titles, that was a conversation that a lot of Californians had,” Todd Gloria, the mayor of San Diego, told me what was going on in the room. “People are just very frustrated.”

So did the governor get what he wanted? Did his slap fix anything with our response to homelessness?

Yes, actually, on both counts.

But what Newsom wanted was less bombshell than bureaucracy. Few of us are likely to notice the changes. At least not any time soon.

To recap, California has a homelessness problem, and it’s not just because there are too many people currently living on our streets. Across the state, two people fall into homelessness for every one we help find housing, an alarming reality that most of us still haven’t fully grasped.

That poverty and suffering are unbearable, practically and psychologically. The number of homeless has skyrocketed during the pandemic, leaving people living in the squalor of the camps. Those of us lucky enough to be able to afford housing are disheartened by the desperation that fills our sidewalks, riverbanks, underpasses, and our psyches.

That’s because we don’t have enough houses. We’re a million units short of protecting our middle and lower classes from being squeezed out under one roof by constantly rising rents. There is no quick fix. Although we are building, it’s not fast enough and not in sufficient quantity. It will take years.

But what should a politician do in the meantime? That’s the question Newsom wanted to answer.

When receiving the municipal action plans to tackle homelessness a few months ago, Newsom noted that together they had pledged to reduce the number of homeless people in the state by a meager 2% by 2024.

There are some issues with the numbers, but I won’t drag you into the weeds. Suffice it to say, there are more homeless people out there than we can handle, and Newsom’s first goal was to make that bleak-sounding goal even more ambitious. In reality, however, the change in these numbers is more symbolic than material.

One of the reasons our short-term answers aren’t working is that not every area is doing its fair share. Some places, like Santa Clara County, which are consistently considered models, have their act in common. The city of San Jose and the county are on the same page, working toward common goals. Which just sounds like good governance.

But it’s rarer than it should be. I’ll use Sacramento as an example (full disclosure, my spouse works for the city). For six years, Mayor Darrell Steinberg, a mental health advocate who once headed the Senate, has been trying to persuade the county to get on board with his aggressive approach of getting people into housing and services. Counties receive most of the funding for health and behavioral health efforts. So without the support of counties, cities can only go so far.

Last week, Six years since I started writing about it, Steinberg eventually signed an agreement with the county in which it pledges to do “whatever it takes,” he said, to help the people of California’s capital.

“We talk a lot about accountability, especially when it comes to homelessness,” Steinberg said. “Here we present a model of how to approach accountability very rigorously and define the roles and responsibilities of the city and county.”

But not every city has a mayor as implacable as Steinberg. That’s why Newsom’s second requirement called for every location to have exactly the kind of agreement Steinberg brokered — a legally binding contract that spells out who does what. Simple, but seriously, you’d be shocked at how many cities and counties aren’t working together and how few have put their expectations down on paper.

Going forward, Newsom is requesting that the contract be part of any request for this specific type of government funding. If only the meeting had accomplished that, it would have been worth it—although it was a demand that should have been made long ago.

But Newsom also pledged more help with zoning and land use, at the urging of many present. During the pandemic, we’ve seen with Project Roomkey and Project Homekey how powerful government intervention can be by dropping some rules to allow old motels and apartments to be repurposed as permanent shelters for the homeless.

Local control of zoning has been a massive impediment to both housing construction and mention of shelters and other temporary alternatives. As someone who lives in a quaint neighborhood with large yards and whose entire retirement plan is based on the equity of a single-family home, I understand the concerns about how the landscape of our homes is changing. But things have to change if California is about justice and providing for future generations, no matter how vehemently some may oppose this obvious truth.

Therefore, a promise from Newsom to continue and further advance this government intervention is encouraging and important. Another victory at this very serious meeting.

But two problems have not been resolved – the two most difficult conversations that we cannot ignore.

First, talk of permanent homelessness funding was quickly shut down by the governor.

Local leaders have long and rightly complained that the one-time grants they receive to fund homelessness make it difficult to plan long-term, even though the money lasts for several years. However, this is not a problem for a few years. It’s a decades-long crisis, and local governments are resentful of setting up complicated programs that ultimately they may not have the money to pay for.

Gloria told me he specifically requested that the homeless fund not only be made permanent, but that its amount be doubled to $2 billion. That’s an idea lawmakers have kicked around with little traction.

But “that’s the size of the problem,” Gloria said. “If we want the kind of change that the people of California want, we need more resources.”

Newsom has shown no interest in making homeless funding permanent, especially given a weak economy that leaves us with an estimated $25 million budget deficit next year. But this economic downturn will only drive more people into instability, so there’s a catch-22 if we don’t spend now on a problem that we know is growing and will continue to cost us whether we like it or not .

There was also little desire to take a serious look at our state’s stance on involuntary treatment for people with serious mental illnesses. Helping those who fall under this category – and by that I mean people with psychotic disorders who are unable to take care of themselves or who pose a danger to themselves or others, whether they are homeless or not – is a must crucial part of our short long term and long term answers.

Steinberg is pushing for a legal right to treatment – a requirement similar to our system to help people with developmental disabilities live cared for and safely in our communities. There are costs involved, but I think he’s right that nothing changes without a legal mandate.

But the governor and too many members of the legislature balk at the very idea of ​​using political clout to address the issue, regardless of the tragedies that are unfolding daily because of our reticence. Dealing with serious mental illness has become a contentious civil rights issue. We shy away from it because it confuses the comfortable lines of liberal and conservative, progressive and regressive.

Last year, after an uphill battle, Newsom managed to pass legislation for CARE Court, a system of voluntary treatment supervised by civil courts — while fighting the notion that it was a step backwards, bringing us closer to the dark past of mass institutionalization . But CARE Court aims to urge counties to offer more community-based services to this hard-to-reach demographic, and yes, get more people to accept treatment.

More than one elected leader present at that Sacramento meeting asked the governor to lobby for reform of California’s conservation laws, just as he did at the CARE Court, according to several in the room. They demanded that this issue should – rightly – be the one on which Newsom will focus during the upcoming legislature.

But that’s unlikely to happen either, because the policy doesn’t add up in a year when Newsom has brighter aspirations, including fighting unpopular oil majors.

And so, in the end, Newsom’s move on the Homeless Action Plans got him the necessary internal fixes he wanted to stop some of the chaos surrounding our spending. But it’s not enough.

We need to have tough discussions about mental illness and how to invest in and rebuild a system that has replaced treatment with incarceration and suspension.

Until we do that, we’ll only see more of the same on our streets.

https://www.latimes.com/california/story/2022-12-10/column-newsom-demanded-better-on-homelessness-did-he-get-it Column: Newsom talked tough with mayors and supervisors on homelessness. Did it work?

A Small Texas City Gets a Drag-Queen Parade for Christmas