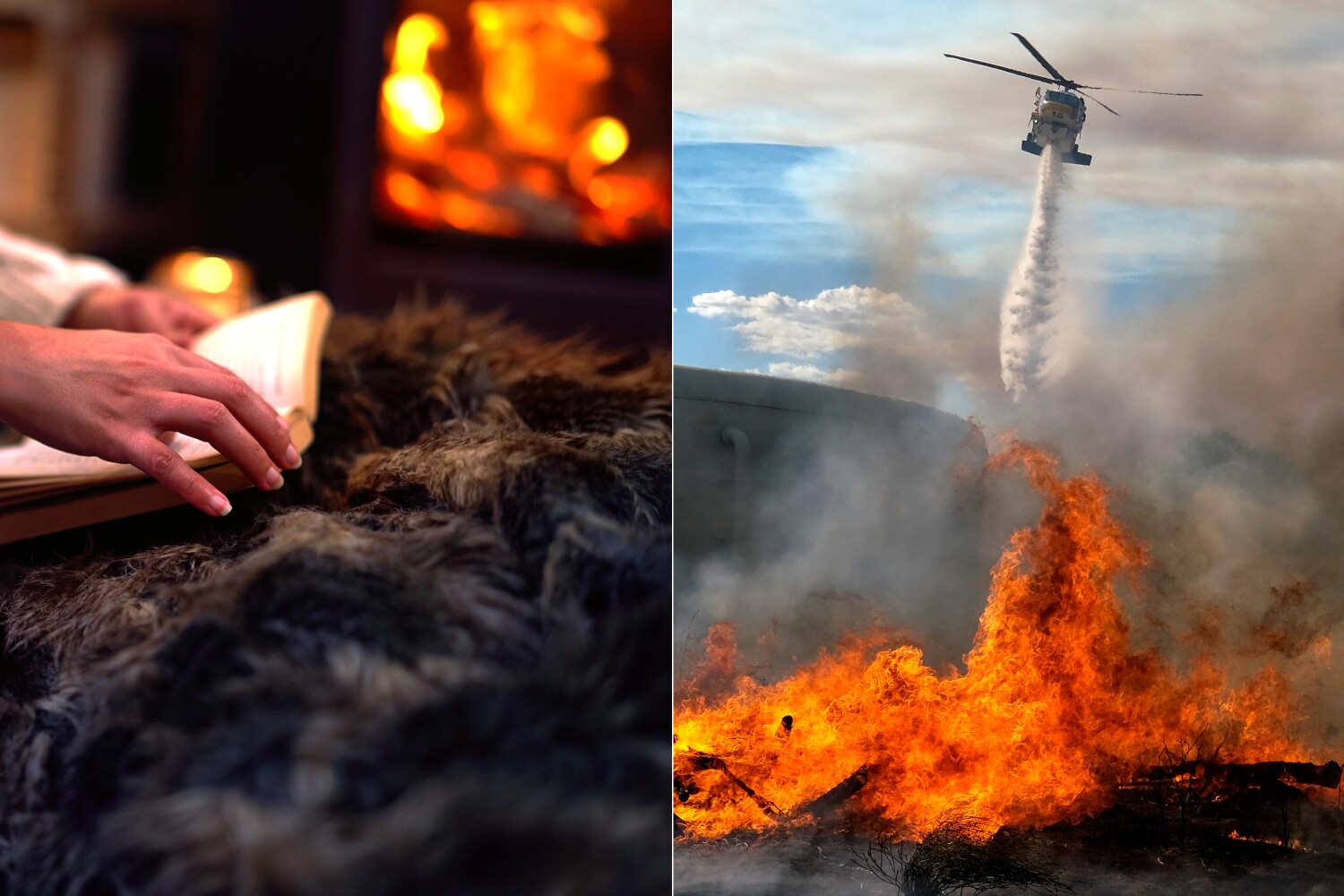 If I ever leave Los Angeles, it won’t be for the traffic, or the city’s inability to help the homeless, or even for the sight of all those celebrity lawns in the middle of a drought.

No, the only thing that could force me out of my adopted country of three decades is September.

September in Los Angeles is the worst — a culturally manipulative, psychologically abusive, filthy hoax of a month.

It’s officially the first month of autumn and conjures up all of the calming hallmarks of this season: fresh “sweater weather”, soft lights, changing leaves, evenings in front of a roaring fire and pumpkin spice all.

But even before global warming turned California into a heat-vaulted powder keg teeming with fire tornadoes, September in LA was consistently hotter than most previous summer months, and at times absolute hell.

LA’s signature September scent may be woodsmoke, but the flames engulf homes and landscapes, not crackle happily in chimneys.

It’s not often that Angelenos has a right to complain about the weather, especially since rain or even cloudiness here is treated as a blessed event that defies drought.

We’re used to cultural evocations of seasons that don’t play out here like other parts of the country: Southern California has winter snows, you just have to drive there. And while some scoff at our tendency to don winter boots once the temperature drops below 70, I always get the feeling we’re just trying to keep in touch with those who live in less temperate climates.

In September, however, there is nothing left but to suffer. From the heat, from the fires and from the cultural separation.

As stores and catalogs brag about the return of corduroy and tartan plaids, Angelenos frantically rummage through shelves and websites to find fall-hued summer clothes and breathable back-to-school shorts that don’t give their child a dress code. The traditional back-to-school shopping, which involves slacks and a top, not a t-shirt, won’t happen until sometime in November.

Oh we’ll have the Pumpkin Spice Lattes but we need them with ice thanks that kinda ruins the whole cozy point. But “cozy” isn’t a word associated with LA in September (or, if we’re being honest, most of October).

Unless you mean a cozy murder, because when Angelenos are exposed to yet another image of a family in matching flannel, smiling over a bowl of rosy apples or gathered around a roaring fire, it will be difficult to identify the killer. The UPS driver is exposed to such intense heat that the asphalt is softening? The remote worker who suddenly sees the advantages of the office (better air conditioning and free)? The high school football coach wondering why a sport that has to be played outside in terribly heavy gear is a fall activity in California?

My money’s on the east coast’s September birthday, which even after 30 years in LA still expects to experience a month that’s warm enough for bare legs during the day but hot cocoa weather at night.

It’s safe to make hot cocoa at night in LA in September; You don’t even need a kettle. Just leave a cup of hot water outside for a few minutes.

Obviously, a lot of the dissonance is down to marketing – Halloween decorations are popping up in stores in early August, along with fall themed banners and all those apple/pumpkin/fall night candles. But this hard sell is just a continuation of how American culture has portrayed September for centuries.

Poets, painters and pop stars all see September as a time of beauty and transition, when summer’s steamy dog ​​days give way to “the season of mists and mild fertility,” as John Keats wrote. A time of happiness and productivity before winter – real or metaphorical – sets in.

“Lyric night of the lingering Indian summer, / Shadowy fields that are odorless but full of song,” wrote Sara Teasdale in September Midnight.

Film and television have rendered the imagery more prosaic, but in the collective imagination September remains firmly a time of yellow leaves underfoot, cool rain scouring the windows, crisp cloudless days – a time when it is delicious, to be outside or inside.

“Try to remember the kind of September / When life was slow and oh so gentle,” sang Jerry Orbach on The Fantasticks, and a million other people since.

It’s pretty hard to be gentle in LA when you’re trying to figure out how to make it from 4 to 9 without using a large device to prevent the grid from shutting down. (Do TVs count? Because in LA, September really means pilot season.)

Not surprisingly, music was a powerful generator of the September myth.

With the exception of Green Day’s “Wake Me Up When September Ends,” the month is inevitably code for love and memory, opportunity, and chilly autumn nights. I don’t think Earth, Wind and Fire were thinking of triple digit, devastating, sweaty heat when they sang “September” to the top of the charts.

Even before global warming gave us a Labor Day heat dome, nothing separated LA from other major American cities like September. It’s the blazing reflection of June, when people expect LA to be warm and sunny and inevitably get shocked by the cold and humidity.

In a good year, that is.

LA may be the hometown of American cultural production, but when it comes to the weather, we’re trained to see the seasons not in national advertising campaigns but in more local signifiers — the jacaranda, the crape myrtle — and yes, all those FYC billboards. This city proudly stands out from many other places in the world and we like it that way.

But September is still a burden. You could think of it as revenge for all the beautiful New Year’s days that have lured countless visitors to the West for the Rose Parade. That would be fair if it weren’t for all the September-specific cultural baggage. Every year I wish that local merchants would read the room or the weather report and back off with all that “fall-fall-welcome” marketing, which only makes matters worse. But I have loved ones who live for pumpkin spice season and I don’t want to start a riot.

Yes, it’s 104 outside and the smell of wood smoke is more of a cause for concern than comfort, but who doesn’t love the scent of a good autumnal candle? Even with the thermostat set to a power-saving 78, this month’s siren song remains so compelling that a little fake September is better than none at all.

https://www.latimes.com/entertainment-arts/story/2022-09-02/column-in-los-angeles-mellow-september-is-the-cruelest-month Column: September is the cruelest month — at least in L.A.

What to expect at Apple’s ‘far out’ iPhone 14 event

Now MONICA LEWINSKY Is Demanding Beyonce REMOVE Lyrics About Her From Song!!

Lawyer: Brad Pitt isn’t ‘going to own anything he didn’t do’