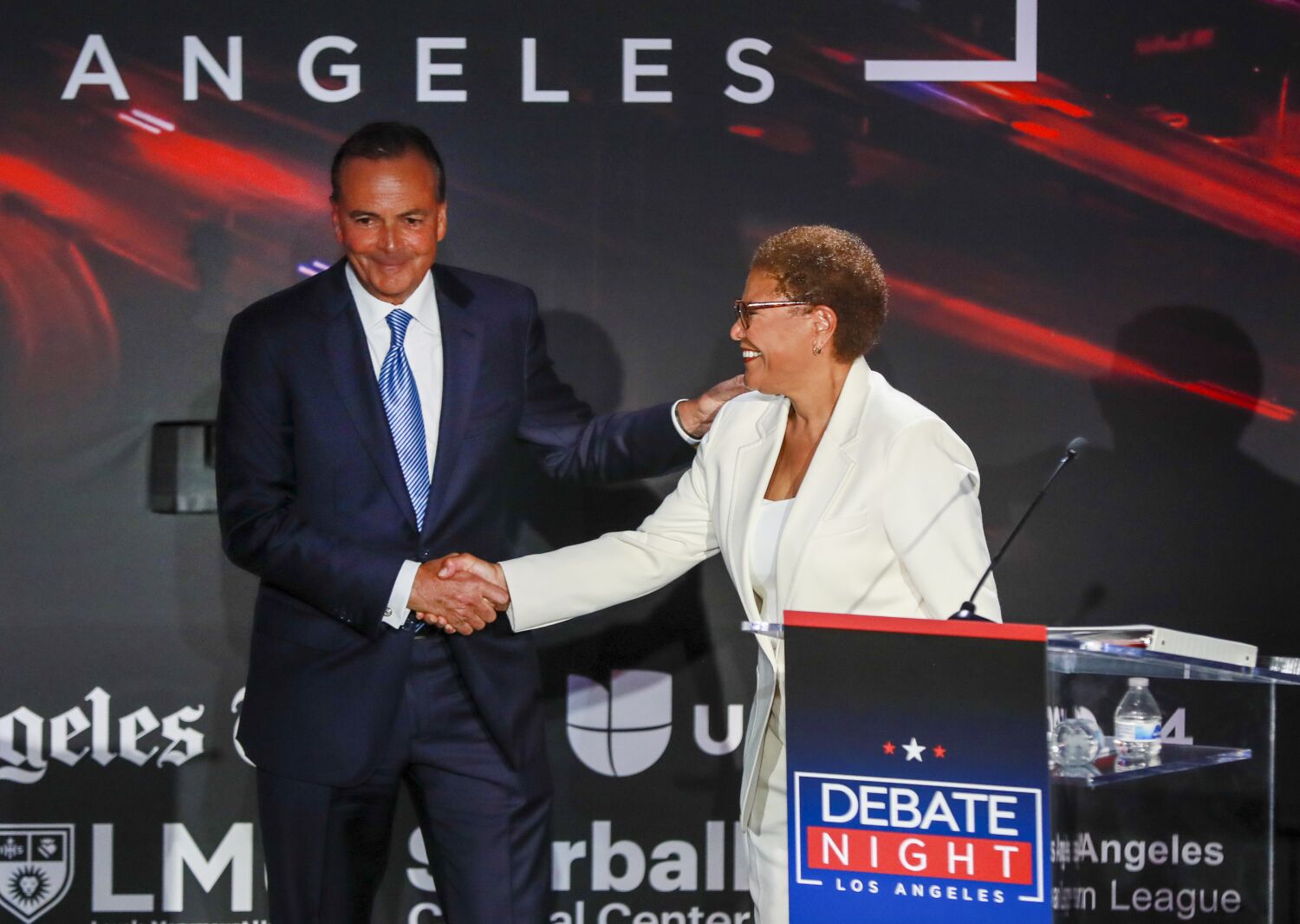 You might be inclined to call me naïve for what I’m about to say, but I’ll say it anyway.

With just six weeks left of the Los Angeles mayoral campaign, can we please focus on what matters most?

Yes, I know, I know — candidates have claws, and political campaigns tend to turn negative sooner or later. That’s the way it is.

A Sept. 9 Times headline read, “Bass and Caruso Trade Insults as LA Mayoral Race Turns Ugly.” The story was about the candidates beating each other over their relationship to scandals at USC .

On Monday morning, Rick Caruso’s campaign sent out an announcement that it was running two new ads titled “Church of Karen,” which featured US Representative Karen Bass at a Church of Scientology event.

I watched both, one for 30 seconds and the other for 60 seconds, and my only response was a shrug.

Sure, it was a bit odd to see Bass tell several thousand Scientologists that “Your creed is a universal creed and one that speaks to all people everywhere.” Scientology, according to the Caruso campaign, has, among other things, a “reputation for intolerance, abuse and deceit.”

But that happened 12 years ago, in 2010, and unless Bass was funded by Scientology, it looked like nothing more than a standard political gig. The event garnered some news attention in 2020 when Bass was considered a candidate for Joe Biden’s running mate.

So did her visits to Cuba in the 1970s and her comments in 2016 calling Castro’s death “a great loss to the Cuban people.” I heard from a local Cuban-American who was appalled by Bass’ Cuba connection and I respect that.

But to me, it’s a bigger deal that Bass received a full scholarship from USC to a master’s degree in social work while also earning a handsome salary as a member of Congress, despite the fact that unconnected students took on crushing student loan debt.

And sure, it’s fair to ask if Caruso acted quickly enough over various scandals while on the board at USC. I would also like to reiterate that Caruso as a developer of shopping malls, apartments and hotels has not stepped forward and has not built any of the affordable housing that is so badly needed.

So let’s agree that every candidate has a wart or two. We know that Caruso, a longtime Republican, conveniently switched to the Democrats before running for office, and that he has supported candidates on both sides of the abortion issue. And we know that Bass, who once said she feels safe in LA, recently had two guns stolen from her home.

But those are the two choices for LA voters, and the city could have done worse.

In a city shrouded in blue tarps, there should be a whole debate about the interrelated issues of housing, homelessness and crime.

And I wouldn’t mind seeing a forum where a handful of struggling housing and homelessness providers parley with the candidates about what works, what doesn’t work, what there is too much of and not enough of.

Two headlines of the last few days were certainly calling for more attention.

One, my colleague Doug Smith, claimed that the last census of the homeless in Venice was so impossibly low that it was clear that there had been an error in the Los Angeles Homeless Authority’s census. And in the western San Fernando Valley, councilor Bob Blumenfield was puzzled by a reported surge, saying, “We just don’t get answers that add up.”

The numbers were so suspicious that City Council President Nury Martinez called for an investigation.

This comes as LAHSA’s role and the overall city and county response to homelessness is ripe for review, and we should hear more about it from city and county candidates.

My colleague Connor Sheets’ other story reported that between 2015 and 2020, when the homeless population skyrocketed, $150 million in federal grants to reduce homelessness in the Los Angeles area went unspent.

The explanation as presented by Sheets will give you a migraine. To sum it up in one word, “bureaucracy” fits, although a lack of effective strategy and capable leadership is also to blame.

Bass and Caruso have each drawn up plans to tackle homelessness and have announced some big goals. But Bass places a high value on simply better managing the resources at hand, while Caruso would place a high value on temporary housing. And the first-year promises made by both candidates — particularly Caruso — are unrealistic.

Caruso says he will house 30,000 people in his first year at City Hall, half of them in “sleeping pods” and the other half in tiny houses. Even if he could magically raise the small fortune and battalions of employees it would take, it would be a short-term fix at best.

Managing the lives of 30,000 people – many with mental health and addiction problems – is a massive undertaking. And as we have seen time and time again, such as with the tiny home villages I just wrote about in Highland Park and Eagle Rock, there is not enough permanent housing or mental health and addiction services for the existing temporary housing population of 30,000 alone more people.

Undoubtedly, many votes are already blocked for the November 8 election.

But the race could turn out to be currently undecided voters.

For them and the entire population, both sheltered and homeless, it is time for candidates to let go of peripheral distractions and focus on what really matters.

https://www.latimes.com/california/story/2022-09-26/column-enough-about-guns-scientology-and-usc-l-a-voters-need-more-on-tents-from-bass-caruso Column: These are the issues Bass, Caruso need to focus on

Lakers say they're committed to Big Three with Russell Westbrook

Don’t Count Out Crime as a 2022 Midterm Issue