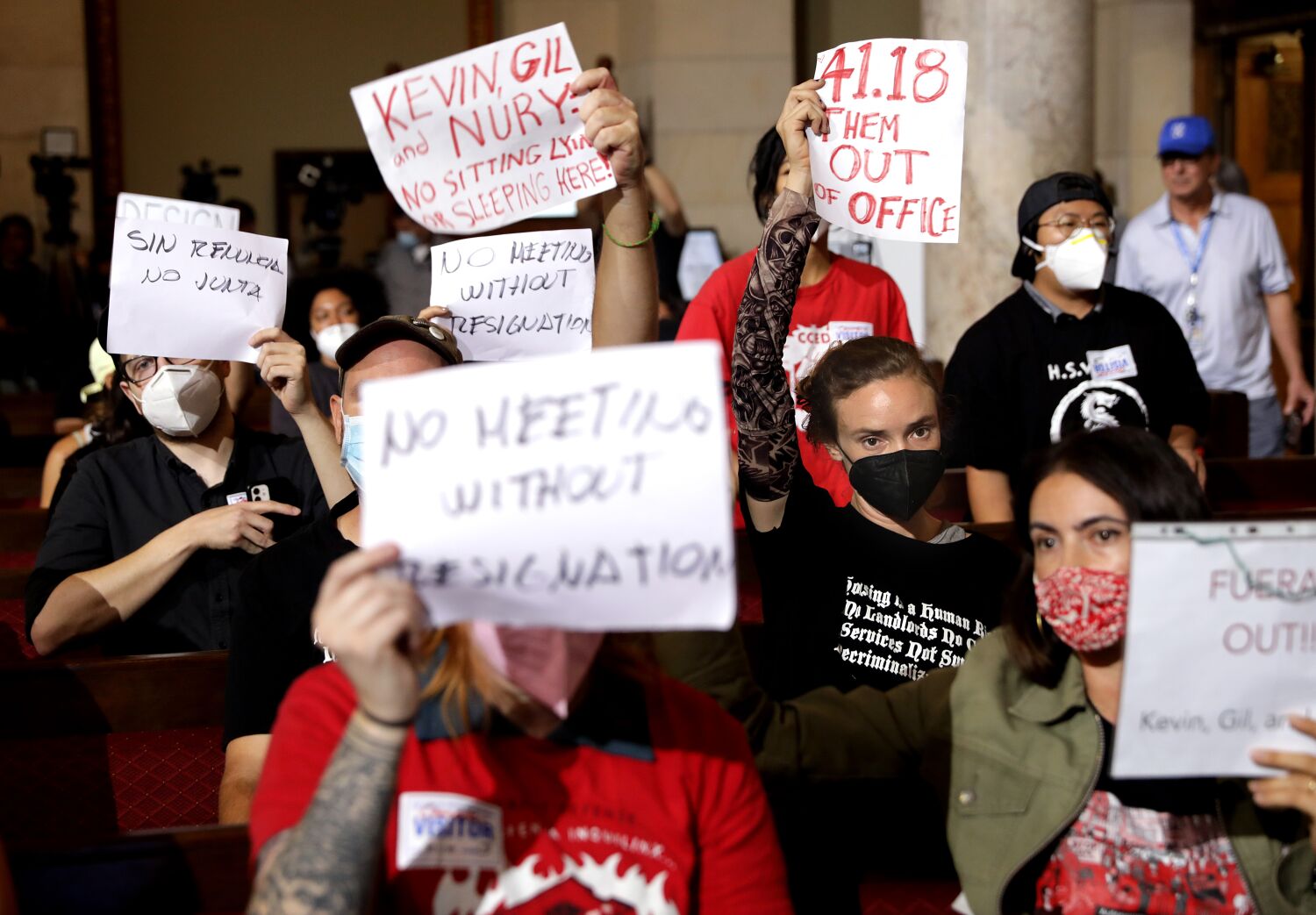 The Roman statesman Cicero, in the years before he died in 43 B.C. Little did he know that one of his quotes would be engraved on the south facade of Los Angeles City Hall.

There it says: “Whoever breaks his oath profanes the deity of faith itself.”

The last time I noticed this was in February 2019, writing about the snake’s nest of political corruption scandals that made headlines at the time, even though City Hall itself was in the midst of a rodent infestation.

“Employees shouldn’t have to come to work because of rodents,” said then-council president Herb Wesson.

There is so much more than rodents to worry about these days, after a week of scandals that made me revisit the Cicero quote as I walked into the building for one of the most memorable city council meetings in history .

If the oath to which Cicero referred was to serve with honor and integrity, and to redeem the promise of true leadership, there were many faults, and the public figuratively demanded the heads of councilors Nury Martinez, Kevin de León, and Gil Cedillo.

As half the world now knows, the three of them, along with union leader Ron Herrera, could be heard on a secret recording a year ago in Los Angeles, the diversity capital of the United States, calling Martinez, the gang leader, to reset race relations Oaxacans are short, dark, ugly people and referred to Councilor Mike Bonin’s black child as an ape.

And so on and so on, desecrating the divinity of belief itself. The conversation was a strategy session on how Latino leaders could encroach on black power and supposedly gain more for their people, or was it more for themselves?

At Tuesday’s meeting, council members were berated and booed by a rainbow coalition of those offended by the bigotry and power-seeking heard on the recording. Their signs read, “Shame on you,” “Take out the trash,” and “Our communities deserve better.” F-bombs flew and a man next to me repeatedly hit a bench with a metal bar.

It was hard to tell at different moments if Los Angeles was coming apart or coming together. I still don’t know, several days later.

But that is indeed the question, as less than a month away local elections are taking place in a city of sprawling mansions and ragged tents, fathomless wealth and abject poverty, and a prevailing sense that little or no progress is being made on the most vexing and divisive issues is achieved .

After several denunciations by those heard on the offending recording, Pastor William D. Smart of the Southern Christian Leadership Conference took a slightly different tack and took to the City Hall podium to thank the wrongdoers.

“Your actions have resulted in us having a grand coalition of people who have come out to really work together in unity and demonstrate together,” Smart later told me, saying the first agenda was to keep demanding everyone’s resignation who were heard on the record. (Martinez and Herrera were the first to leave.)

The shot, he said, “helped us understand where they stand, and they had an almost superior attitude — they felt like they owned parts of Los Angeles.”

At the council meeting, I sat next to Shianne Winston, vice president of the Black Los Angeles Young Democrats, which she says was founded 10 years ago in mayoral candidate Karen Bass’ living room.

Winston wore a T-shirt that read “I’m with the Blacks,” a nod to what Martinez had claimed on the tape regarding her sense of where Dist. atty George Gascon stands. When I asked Winston how she and others made the shirts so quickly, she looked at me like the oddball that I am:

“This is a huge turning point in the city,” Winston said, telling me the sentiments expressed on the recording weren’t surprising, but they were electrifying.

While politicians spoke of sharing power along ethnic lines, Winston said their comments could further unite “Latino organizations, Asian-American groups, Pacific Islanders…our friends and neighbors from other communities” around a common agenda.

And what is the agenda?

All the various issues surrounding income inequality and housing affordability, as well as demanding and supporting a leadership that better reflects the city’s ethnic makeup and represents the interests of the people, not the powerful.

Longtime activist Najee Ali stood beside me, fist raised, clenched and singing “We are the Blacks,” part of the multiracial demand that all City Council business be halted until everyone on the record had resigned. In a quieter moment, I saw him speaking to Rev. William Contreras of Clergy and Laity United for Economic Justice.

“They didn’t care about their community,” Contreras told me of the officers on the recording. “You saw for yourself what’s inside.”

Contreras, who described himself as a former missionary and said he lived among the homeless for three years to better understand their plight, was struck by Martinez’s comments about indigenous communities.

“We’re not stupid, we’re not small and ugly,” he said, and people like him are now all the more committed to demanding leaders who, “whether they’re Black, White, Latino, don’t take us to the… Lead will be color of their skin, but with integrity and moral authority.”

As admirable and hopeful as this notion is, Kumbaya and consensus may be distant relatives, and the crude perspectives revealed on the recording may serve to further divide rather than unite.

The city has as many political fissures as earthquakes, and last week’s quake was at least partly due to generational shifts and left shifts welcomed by some and feared by others. When it comes to homelessness alone, the political divide runs deep on everything from a ban on camps to the type and cost of new housing.

And yet, while I’m wired for cynicism and conditioned for chaos, I want to believe Pastor Smart, who told me it’s possible for people to want different things but find common ground in unresolved challenges and shared humanity, and Shianne Winston, who believes we are at a turning point.

Incidentally, Cicero had another remarkable observation to be engraved on the wall of the town hall:

“The welfare of the people is the greatest law.”

https://www.latimes.com/california/story/2022-10-15/lopez-column-audio-leak-turning-point Column: ‘This is a huge turning point in the city’

‘The Young And The Restless’ Spoilers: Fans React To Victor Newman’s (Eric Braeden) “Heartbreak” – Adam Newman (Mark Grossman) Doesn’t Deserve Any Of This