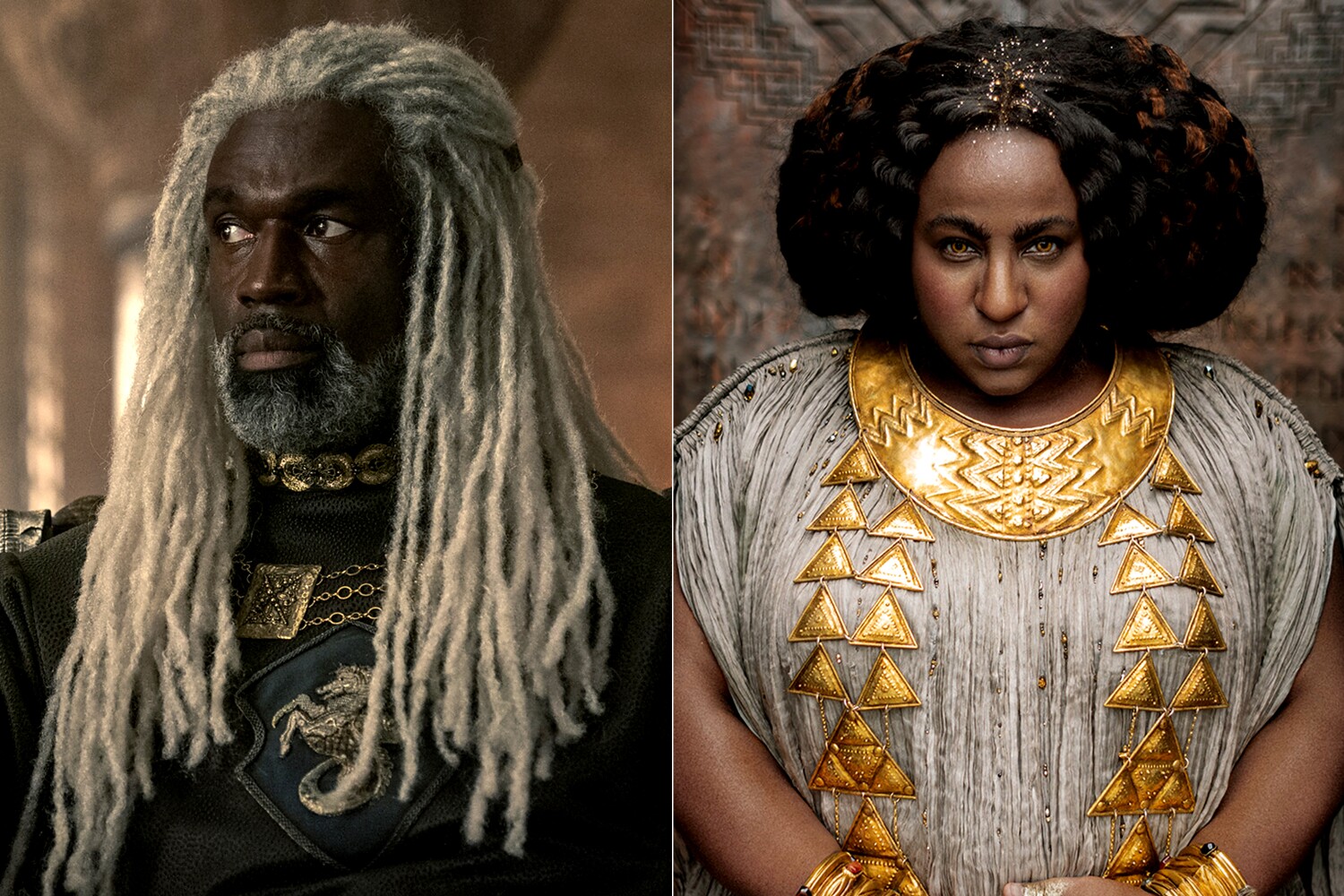 When Steve Toussaint was attacked on social media for having the audacity to play Lord Corly’s Velaryon in House of the Dragon while Black, Steve Toussaint replied in the only way a thinking actor could: “They’re happy with a flying kite,” he told a recent interview in Men’s Health. “You’re happy with white hair and violet eyes, but a rich black man? This goes too far.”

Indeed beyond the pale; Not only does Toussaint encounter the wily and ambitious “Sea Serpent” in early episodes, he’s pretty much the only member of the cast who looks natural under one of those Targaryen-blonde wig hats.

Also, no one except the late great Elizabeth Taylor has violet eyes.

Since obedience to original material is almost always used to justify outrage at a person of color playing an adapted character who was or was considered white, it is important to acknowledge the etymological root of the term used by Toussaint.

“The Pale” originally referred to the borders surrounding the English invader settlement that would become Dublin, Ireland. Outside these borders lived the native Irish, whom the British regarded as lawless savages.

So “Beyond the Pale” is essentially a racist term. Which makes perfect sense here.

It’s equally important to acknowledge that I don’t know what their reaction will be if certain people get upset that a black man is playing a character occupying a seat of power in Westeros when they take a look at Amazon’s version of Middle-earth. Maybe something like that famous scene in Scanners.

Well before the series’ streaming premiere on September 1, the term “awakened” was being tossed around with the usual idiotic nonchalance.

In The Lord of the Rings: The Rings of Power, actors of color play all sorts of characters – elves, dwarves, humans and harfoots (which we assume later became known as hobbits). These are the racial differences rather than say black, white, Asian, etc. that JRR Tolkien used to tell his epic story of how the denizens of Middle-earth put aside historical hatred to fight a common enemy.

If all or most of Tolkien’s original humanoid characters were depicted as white in his books, then he was a British scholar using the Norse tradition to create a British mythology, so racial homogeneity was built right in. George RR Martin has said that he, like many other modern fantasy writers, was inspired by Tolkien and that his Ice and Fire saga is loosely rooted in the British Isles.

Still, having lived through two world wars, Tolkien celebrated his own version of multiracial unity – just as, at its core, A Song of Ice and Fire is the tale of warring tribes finally realizing they are stronger when united.

All the more ridiculous is the outrage about what is unfortunately still called “diversity casting”. You cannot betray fidelity to an original work when you are so blatantly missing its main message.

As Toussaint and many others have pointed out, both works are not historical, and if the word ‘fantasy’ doesn’t offer enough freedom to play around with how things and people look or sound, then the word ‘adapted’ should do.

I would argue that both Game of Thrones and Peter Jackson’s Lord of the Rings could easily have included more actors of color in hindsight. Of course, as each story revolves around the dangers and power of racial or clan identity, its sequels would require advances in inclusion of all kinds.

But the fans, oh the fans, and their deeply personal and emotional expectations.

Please. Superfans of a book will always object to how it’s adapted for film or television. I, too, cried when I learned that Tom Bombadil didn’t do the final cut of LoTR and was really looking forward to Lady Stoneheart’s appearance in GoT. But to question the physical characteristics of the actors is absurd.

Half the time, fans are wrong: Remember the shock and horror some of the more racist “Hunger Games” fans expressed when Amandla Stenberg played Rue? Even though Rue was described as black?

Either way it shouldn’t matter. You’re an actor, for goodness sake. Harry Potter had black hair and green eyes, which was a very big deal in the books; as embodied by Daniel Radcliffe, his hair was brown and his eyes were blue and life as we know it did not end.

(No one says castings should always be random. But calls for authentic casting of underrepresented roles — in the case of trans, gay, deaf, neurodivergent, or disabled characters — are in no way analogous to the Toussaint protests. No one is a true Targaryen or a wood elf or a citizen of Khazad-dum, so no actor has any particular insight into those parts.)

The whole point of adaptations is to bring a glorious story to life in new ways, celebrating its timelessness and bringing it to new audiences. Both “House of the Dragon” and “Rings of Power” are prequels, so internal continuity has to be debated. But is this really a wormhole worth pursuing? Do we really not understand the definition of fiction?

The trick to any successful adaptation is to stay true to the spirit of the original; If you’re not trying to expand on the story in any way, why bother?

No matter how much we love our classics, our genre touchstones, there’s no denying that most of them were written or created during a time when white men and stories about white men dominated the cultural narrative. Going forward, we must expand our definition of “classic” and “touchstone” to include the entire world that exists “beyond the pale.” And this expansion must include the reinterpretation of the beloved works.

Any attempt to make our storytelling better reflect the actual world, to use our myths to discover truly universal truths, will look and feel different. It must; Stories, like everything else on this planet, must change to survive.

If we’re to stick to those touchstones like Lord of the Rings and Game of Thrones, modern day adaptations need to look and feel different too.

So when you express your “respect the original material” outrage at a black actor playing a velaryon or an Afro-Iranian playing a dwarf princess, you might want to remember what happened to those original material characters who have refused to acknowledge the world has changed. Because it wasn’t good.

https://www.latimes.com/entertainment-arts/story/2022-08-29/if-youre-having-trouble-with-characters-of-color-in-house-of-the-dragon-and-rings-of-power-youre-missing-the-point Column: What color is an elf? Or a Sea Snake? And why do you care?

Column: ‘Love Actually’ is like fruitcake: love it or hate it (and I choose love), it’s here to stay

Calendar Feedback: “Babylon” is not a dream