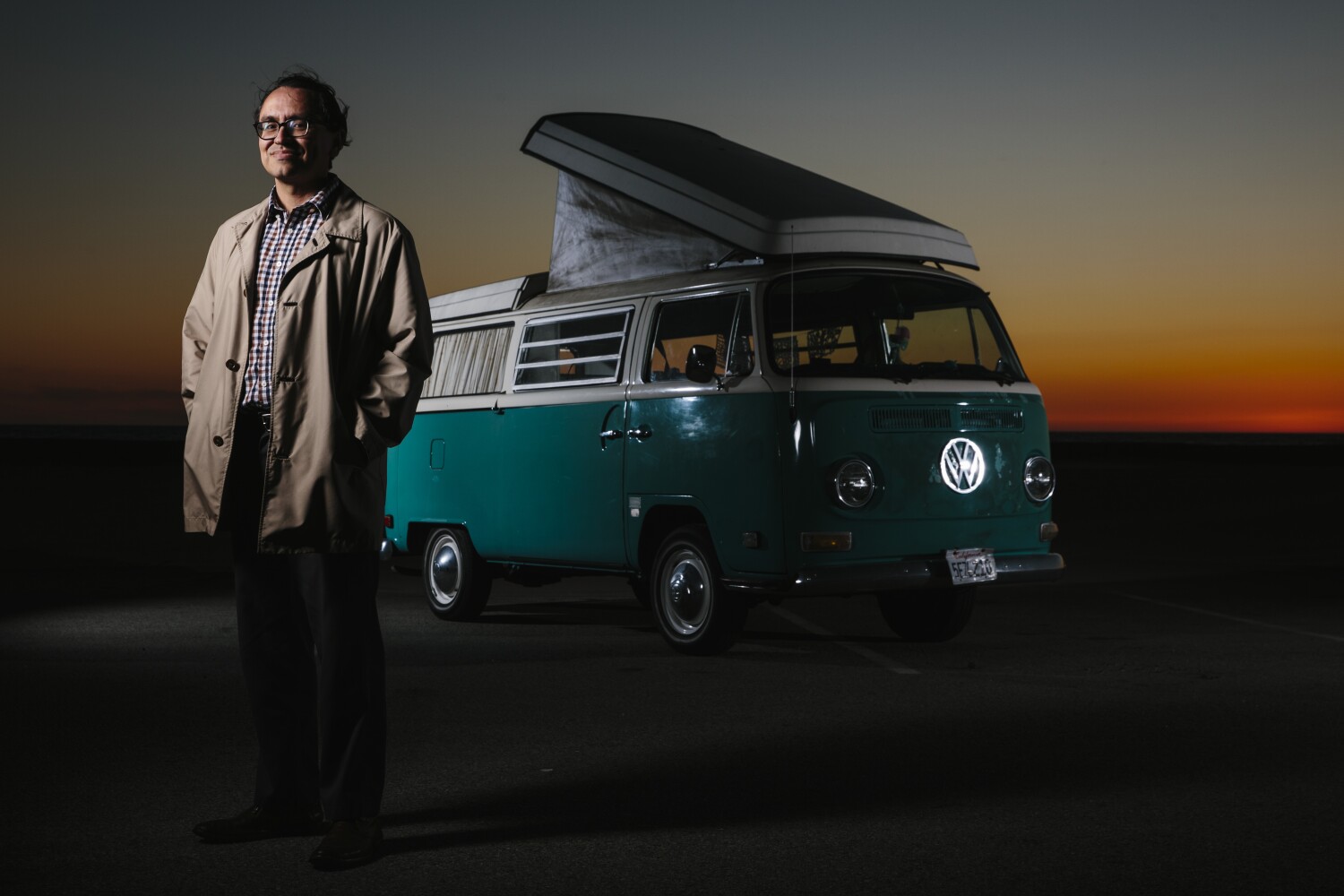 Some parents offer their children a blessing every time they see them.

My father’s holy water is gasoline.

Whenever I visit him, he checks under my car to make sure the fuel lines are tight and then turns on the ignition to see if the tank is at least half full, as he says it should always be. Whenever Dad comes to visit me, he comes with a five-gallon gas can to fill up the lawnmower, weeder, and edger that we use on the patch of lawn that I keep so we can do something together.

He’s a retired truck driver, someone who despite his limited income always tries to drive in style. So most of Dad’s life lessons revolve around the internal combustion engine. Check the timing belts every morning. Ten cents saved on a gallon of lower octane gas will cost you later. Always carry a wrench, jumper cables and a quart of oil. If you can’t own a truck, you know someone who can.

Dad infused me with a love of cars that lasts. I own four gas-guzzling relics – a battered 1968 VW bus, a pristine 1974 Cadillac Eldorado convertible, a sturdy 1979 Ford Supercab, and a 2005 GMC Yukon, which is my daily driver. Yes, I cringe at the pump every day – but mostly I don’t mind because I love her.

Strangers and friends are always surprised because I look like a Prius-driving liberal. I keep my fleet because it connects me to my self-sufficient, libertarian rancho roots. I brag that three of my four cars have carburetors and then laugh when I have to explain what one is. Owning an older car means constant vigilance and acceptance that sooner or later good times will break. Also, my rattletrap means I have to be careful while driving because the most advanced thing they carry is a CD player.

So when I heard that California banned the sale of new gas-powered cars after 2035, I didn’t immediately celebrate.

The development came through a vote by the California Air Resources Board, two years after Governor Gavin Newsom tasked its members with developing and implementing a plan to achieve the bold goal. It’s the latest step in the state’s fight against anything that uses fossil fuels.

The Air Resources Board last year banned the sale of gas-powered garden tools by 2024 and portable generators by 2028. More than 50 cities restrict or ban natural gas in new homes and businesses. California is set to achieve 100% renewable energy by 2045, and Newsom earlier this month urged the state Legislature to make it harder to tap new oil and natural gas wells near schools.

We are doing all of this to fight climate change and set an example for everyone else. Newsom climate advisor Lauren Sanchez described the gas engine ban as “a big day not just for California, but for the whole world.”

I am in favor of reducing emissions. They exacerbate climate change, poison our environment, and disproportionately impact minority communities like the one I grew up in, just off the 91 freeway that separates Anaheim and Fullerton. I appreciate that California is thinking big and is willing to take the lead on important issues while other states look on. Stepping into the Los Angeles Basin on a sunny morning and seeing a tarry gray cloud overhead is a somber reminder of what we’ve done to ourselves.

But a crackdown on gas engines also threatens a community that has divided California’s working class for decades.

Learning how to work on your car is a rite of passage in car culture, a torch passed from hot rodders to lowriders, van-life hipsters to imported car enthusiasts. You may not be able to own a house, but at least you can take care of something and call it your own.

You learn to respect the different facets of the engine, whether you’re a gearhead or not. The different greases and contaminants that each part generates. The deep smell of oil, the acrid stench of gasoline. The symphony of sounds – a roar, a purr, a putter – is produced by every motor. An ecosystem of enthusiasts, generalists and specialists creates community (albeit mostly among men).

All of that is now at risk. California officials insist only new gas-powered cars will be targeted. But nobody buys that. In 2004, then governor. Arnold Schwarzenegger has lifted the so-called grandfathering clause on smog control, which exempted cars for over 30 years. Now it only applies to models before 1975. With the new regulations, the slow dribble against the combustion engine becomes a fire hose.

Again I understand the reason for this. But telling Californians that banning internal combustion engines is necessary to save the planet is not enough. The Air Resources Board also needs to recognize that culture gas fueled cars are ones that electric cars will have a very difficult time replacing. There isn’t an emotional bond with the masses yet, and I don’t think there ever will be.

When it comes to electronics, nothing is cheap. Something as simple as getting out of your car turns into a dystopian mess if the computer doesn’t cooperate. Most need specialized mechanics for the smallest repairs – you can’t call a cousin to check on your car in the driveway. Their shape and feel remain robotic and antiseptic. Her sickly panting while driving is such a stumbling block for working-class types that the electric version of Dodge’s legendary muscle-car Charger will roar just as much as its gas-powered ancestor. Electric cars aren’t as environmentally benign as proponents claim, either, since mining of the rare-earth minerals that power them threaten oceans and Native American reservations alike.

These are just a few of the reasons only a handful of my friends and family dabble in electrics. Families tend to get hybrid SUVs; men prefer mamalonas (massive trucks) or muscle cars that proudly churn out exhaust. Neither is conservative; Everyone believes in climate change. But the state will have to snatch their silverados from their cold, dead hands.

This may seem like selfish and trivial points given the existential angst that our air quality emergency represents. But dismissing such concerns is classic elitism. The working class cannot be shamed for what brings them joy. Because of this, the Air Resources Board hasn’t outright banned gas-powered engines…yet.

Prohibitions in the name of saving the earth almost always hit the very people who purport to raise them. Unfortunately, I know this from experience.

In 2006, the Ports of Los Angeles and Long Beach announced a program to ban all but the newest major oil rigs in the name of a crackdown on diesel emissions. The Air Resources Board eventually passed the same regulations. Drivers whose rigs became ineligible had to either buy a new model or retrofit their old ones, costing thousands of dollars that self-employed truckers didn’t have.

Many lost their jobs. One of them was my father.

Dad was too old to justify buying a new truck but too young to retire. He had to sell his Kenworth and remained unemployed for years as a flood of younger truckers flooded the market.

California expects its gas engine ban to be successful because the auto industry will mass produce electric vehicles and the market will then decline to the point where they become affordable. But that’s technocratic thinking.

Gas and oil are California sacraments that working people don’t give up easily. The Air Resources Board will have to do more than offer subsidies to convince them. If you tell someone they have to give up their way of life because of you saying so, they will double down even if they know it’s ultimately wrong.

just look at me

https://www.latimes.com/california/story/2022-08-26/gustavo-arellano-california-gas-engines-way-of-life Column: What we lose when California bans gas-powered cars

12 Best Airbnbs with Pools 2022 to Get in Some Laps: Year-Round Vacation Rentals With Pools

UN climate reports: No signs of a climate change slowdown