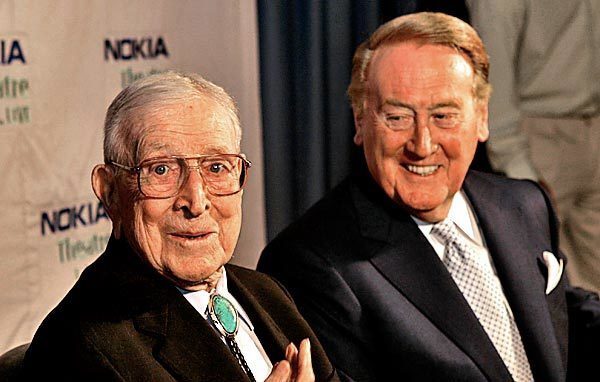 So it might have been a few weeks ago when Vin Scully went to heaven and visited some of his old friends. Among them would be John Wooden. They had invested their time. Wooden died in 2010, four months short of his 100th birthday; Scully died on August 2nd, three months short of his 95th birthday.

You would have a lot to talk about.

John: “You too, Vin. I told some of my friends up here that you’d be coming over soon. I told them they would hear the voice before they saw the person.”

John: “Keep me posted on what’s going on down there. I didn’t keep up. There’s a lot going on up here. You would get a kick out of it. I think I’ve told you several times that my favorite sport has always been baseball. So, I get here and before I know it, Mother Teresa is after me to manage her softball team. It’s in the Division I Pearly Gates League. How could I say no to her? I told her that I probably wasn’t cut out for the job because I could never swear like Tommy Lasorda. She tested me right away and asked me what I thought of Kingman’s performance. I said, ‘Damn.’ I accepted the job. It turns out she’s a five tool player – hitting average, hitting with power, running fast, has a gold glove and a rocket arm.”

Vin: “Once I settle in, I might be able to do a game or two. How about this – “It’s time for some softball heaven.”

John: “Perfect. For everyone here, that would be like a gift from… well, you know. Our stadium isn’t huge, it only has about a hundred million seats. But three times as many have transistor radios. And some guy from ESPN ran a cable feed to Purgatory.”

Vin: “You wanted me to update you on things down there. I have some surprising things to tell you.”

John: “You fixed the freeways?”

Vin, giggling: “No. More like sports. Colleges now have what is called a transfer portal. It’s really a big deal. It was created, they say, to make wire transfers less cumbersome and with less paperwork. Everything is done with computers these days, and at first it sounded like a reasonable way to help busy college administrators. But it seemed to throw the door wide open for college kids who weren’t happy with their coaches, or their playing time, or maybe just the size of their alum’s monthly check. So they would enter this portal. It’s like standing on a store shelf for trainers with shopping carts to come by and pick you up.”

John: “Phew… sounds like you’re talking about free-agent college sports. Are they all trying to hire Scott Boras? There were always unhappy children and transfers. So are there more now, and I suppose they’ll have to wait another year?”

Vin: “Yes, a lot more. And no, they get a one-off transfer without having to lose a year.”

John: “Holy sweaty socks. There must be good reason to allow a transfer, right?”

Vin: “Well, yes. There are some. Health and injuries and family matters are listed. But the most interesting is that a transfer waiver can be granted “claiming that you have no opportunity to attend your previous school”. ”

John: “Well, that’s a decent reason. If a player doesn’t see a chance to play, he or she should have the right to play somewhere else.”

Vin: “There seems to be a lot of loose interpretations. A school you know well just got a new quarterback through the transfer portal and he was the star quarterback at his previous school, even an all-American candidate. So it is very likely that he would have had ample opportunity to participate there.”

Vin: “There’s more. A few years ago, long after you left, the NCAA finally had to give in, and now student-athletes have the right to make money by endorsing products and marketing themselves. It’s called NIL (Name, Image and Likeness).”

John: “You mean while they’re in college sports, they can be like self-promoters and personal billboards?”

John: “We mostly talk about a few hundred bucks for the star players, right?”

Vin: “Some reports are predicting six or even seven figure payouts to many players.”

John: “I have to sit down. My heart was pretty strong when I was alive, but I’m not sure now. I appreciate you bringing me up to date, Vin, but I’m just stunned. I hope that’s all you have.”

Vin: Just one more thing. Starting next season, your UCLA Bruins will be playing in the Big Ten Conference.”

John (doubles up laughing): “Vin, you’re the best. What a sense of humor. You got me. You had me all the way to the Big Ten thing. The other things might be possible. But UCLA in the Big Ten! Come on. … Let’s find Mother Teresa and start the constellations. You devil, you.”

Swalwell: Student loan interest hurts most for many borrowers