I wrote about three mass shootings yesterday. Now I have to write about at least three more.

By the time I finish this draft, a quarter may have been added, who knows? Now it’s MAGAMurica, where young white men in police custody without incident after murdering ten have chosen to go grocery shopping at the wrong time. 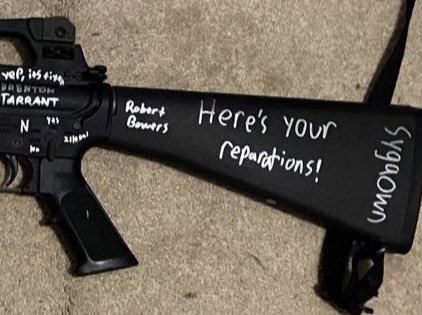 One person was fatally shot outside Grand Central Market in downtown Los Angeles on Saturday night. Police are still looking for the shooter in that incident. Late Sunday, it was reported that two people had died and three others were injured in a shooting at a crowded Houston flea market. According to the sheriff’s office, that shooting appeared to have stemmed from an altercation between five men.

Massacre: At least two people were killed and three others injured today after a shooting at a Houston flea market where more than 1,000 people were shopping. #txlege

But wait, it’s getting worse. Multiple people were shot Sunday at a Southern California church, authorities said. One person died and at least four were injured. I repeat, this happened INSIDE A CHURCH. The gunman was taken into custody. And I’ll just say that my atheism makes more sense at the moment.

One person died, four were seriously injured in a shooting at a church in Laguna Woods. The gunman is incarcerated@Hannahnfry

Tell me more about your “good guy with guns” theory. Tell me what “open carry” means. Explain to me why it’s justifiable for an 18-year-old Hitler graduate to drive across state lines to specifically slaughter Blacks, but you can’t allow one to make medical decisions about that mass of non-viable cells in their uterus.

The #Buffalo the shooter describes himself as an anti-Semitist and a white supremacist; however, the media refused to mention him as such.

In what is known as the “Kyle Rittenhouse Effect,” white young adults raised online and hated by their parents can easily get their hands on AR-15s, cross the street, and kill people in cold blood. Kyle ignored it, these young white men thought, and then wrote their own manifestos based on centuries of white supremacy filtered through modern pop culture. They researched other mass shootings before committing to their own, to make sure theirs stood out. But what they don’t realize is how easily they can be forgotten, even if they kill ten people in a grocery store on a Saturday morning.

Around this time last year, the United States experienced a similar number of mass shootings: about 10 a week. No big deal, the GOP said it still took the money from the gun corridor. Thinking and praying and whatever, right?

Another mass shooting, this time at a Houston flea market.

I wonder if there will ever come a time when the GOP will talk about sensible gun laws.

That is rhetoric. The answer is no.

MAGAmurica is not what the Founder had in mind, no matter what an 18-year-old white kid raised by hate speech and Trump protests says. Vigilance is not the law of the land. We must have the same kind of restrictions on guns as in other countries, because THIS DOESN’T HAPPEN IN ANY OTHER COUNTRY.

https://hillreporter.com/commentary-there-have-been-200-mass-shootings-in-magamurica-and-its-only-mid-may-131555 [COMMENTARY] There Have Been 200 Mass Shootings in “MAGAMurica’ and It’s Only Mid-May

At the Seam of of Three Regions: The Case for More Basing and Access in Greece and Cyprus