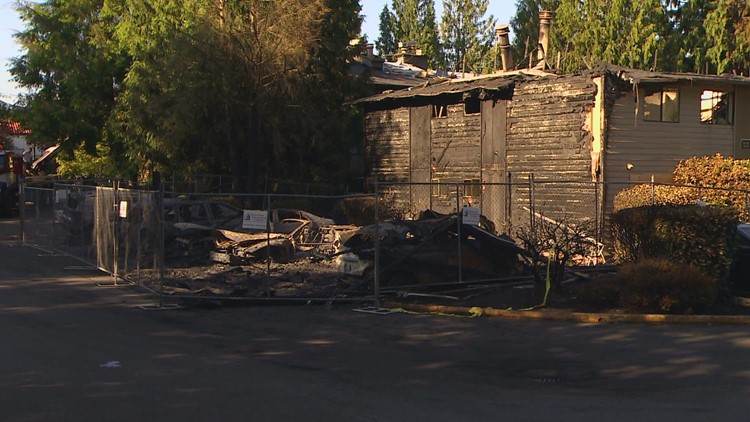 RENTON, Wash. — Community members come together to help people displaced after a fire destroyed a dozen units at the Fairwood Apartments in Renton.

“This is the time to rise up and help the community,” said Karen Rafchiek, owner of 4 Corner Merchants.

Just hours after the fire Wednesday night, nearby business owners gathered to help the displaced.

Sweet Jules Kitchen offered a free meal to those affected by the fire Thursday night, and 4 Corner Merchants and US Nails in Renton raised funds.

“We just hope and pray that the church will all come together at this time because the need is really great. We just spoke to an affected family and they don’t know where to go tonight,” Rafchiek said.

KING 5 learned more details about where the fire started.

“We saw a vehicle fully ablaze, which quickly spilled into adjacent vehicles and also extended into the carport, which then eventually resulted in the building catching fire,” said Sara Ferguson, public educator and information officer at Renton fire department

The fire burned 12 homes and several cars. KING 5 learned the building had no sprinklers.

“If there’s a unit that has a fire burning,[sprinklers]can connect themselves to that unit and really help slow the spread of the fire,” Ferguson said.

Sprinklers, which are helping to slow the spread, were seen at another apartment fire in Renton this week, which contained the blazes to one unit.

King County land records show that the Fairwood Landing Apartments were built in 1981, when sprinklers were not as required as they are today.

“You’re going to see a lot of the newer apartment buildings, they now have this fire protection technology in them. We see them being very useful for saving property and saving lives,” Ferguson said.

The complex is now owned by Sack Properties, headquartered in California. King 5 spoke to a regional property manager and asked if there were any plans to install sprinklers. The manager said the resident’s safety was a priority and had no further comment.

“It’s not just about losing stuff, it’s emotional and they just don’t know what to do now,” said Karen Rafchiek.

If you would like to help, you can make donations to US Nails or 4 Corner Merchants in Renton.

https://www.king5.com/article/news/local/renton/community-comes-together-help-renton-apartment-fire/281-dd1f219a-fa20-41f7-97d4-d7f348cdbdda Community comes together to help those impacted by Renton apartment fire

Britney Spears Posts A Series Of Nudes On Instagram!!