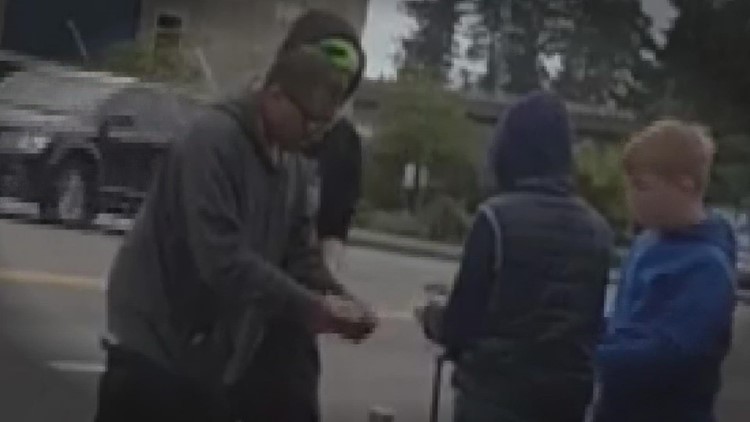 Police say a suspect gave a boy a fake $100 bill after buying food and drinks at his soda stand.

EVERETT, Wash. – Everett police are looking for a suspect who they say conned a boy who ran a lemonade stand by giving him a fake $100 bill.

Jeremy Ryzhonkov is a young entrepreneur. He just turned 12 this week and already has a vending machine shop, a lawn mower shop and a concession stand.

“I don’t think there’s anything in the world that’s free,” Jeremy said.

Three weeks ago, Jeremy was at his usual spot on Beverly Boulevard selling soda and snacks. He said two men bought $20 worth of drinks and food and asked him if he could break a $100 bill.

Jeremy used whatever money he had to give them change. After they left, he noticed the money looked odd.

“The numbers looked different for each color and the hundred dollar bill was smaller and the color was kind of different,” Jeremy said.

Jeremy then ran to a nearby gas station for help.

“I asked if it was real or fake and he said it wasn’t real.”

The gas station attendant called police, who are now looking for the suspect accused of giving counterfeit dollars to Jeremy.

“I was very exhausted from work on a sunny day and felt very sad and disappointed,” said Jeremy.

Jeremy used half of the money to fund some of his businesses and spend money. The other half was to help other families like his still living in war-torn Ukraine.

“I felt really bad that they had to go through that,” Jeremy said.

The bad guys didn’t scare him off. Jeremy was back out on Friday selling food and drinks.

Neighbors kept an eye out for him, gave him a marker to spot counterfeit bills and bought snacks to help him get his money back.

A neighbor set up GoFundMe to help Jeremy and it raised thousands of dollars in the first 24 hours.

Everett Police said the case struck a chord. Police are currently reviewing leads and are asking anyone who recognizes the suspect to come forward with information.

How comic Frankie Quiñones, 'the CholoFit guy,'" makes a killing with characters