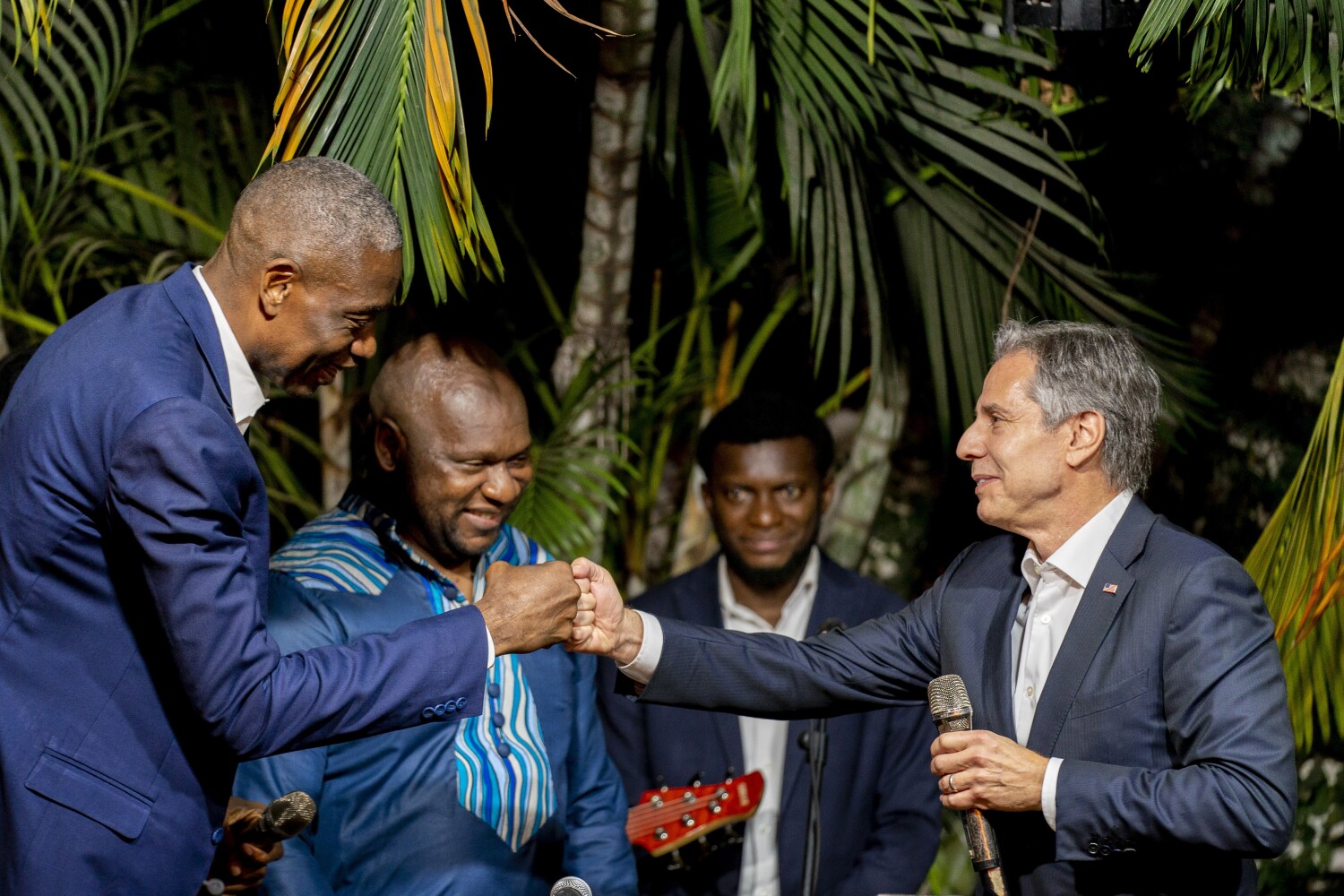 KINSHASA, Democratic Republic of the Congo —

America’s top diplomat on Wednesday hoped to demonstrate the potential for democracy and climate action here in one of Africa’s largest countries. But backsliding reality intervened.

Within hours of Secretary of State Antony J. Blinken’s arrival in the DRC – as he repeatedly urged for free, fair and “timely” presidential elections next year – their government arrested a key opposition leader.

Forced to deviate from his talking points, Blinken acknowledged what he described as a “setback”. Blinken said he would raise the matter with the Congolese government and ask for an explanation.

President Félix Tshisekedi’s government has arrested Jean-Marc Kabund, who is under investigation on allegations that have not been made public. Kabund, an MP and former vice president of parliament, was a close ally of Tshisekedi until the two had a bitter falling out earlier this year.

Kabund then formed an opposition party and described Tshisekedi, who is running for re-election, as a “danger”. Kabund’s lawyer was quoted in local media as saying his client had been accused of contempt for the comments.

The incident shows how fragile efforts to build democratic institutions remain in parts of Africa, undermining stability and fueling violence.

Blinken was speaking after meeting Congolese computer students studying election transparency and countering disinformation, a program partially funded by the US

Tshisekedi’s assumption of the presidency in January 2019 marked the first peaceful transfer of power in Congo since independence more than 60 years ago, but he was part of a power-sharing regime that has challenged its legitimacy. Since then, his administration has been marred by what the State Department calls “pervasive” corruption, human rights abuses, and efforts to silence critics.

He also recently set off alarm bells when he announced plans to auction parts of the Congo Basin’s vital tropical forests and peatlands for oil and gas exploration. He says his country needs the revenue even though the country and its unique ecological makeup are seen as essential to combating climate change.

The Congo Basin forest includes the world’s largest tropical peatland, swampy soils that store carbon deposits and prevent greenhouse gases from damaging the atmosphere and the planet’s delicate ecosystem. The area is also home to indigenous peoples, hundreds of bird species and the world’s largest population of great apes.

The vast forests of exotic trees in the basin also purify the air, but are severely depleted by illegal logging. Congo recently secured around half a billion dollars in pledges from international donors to fight deforestation. The decision to auction off parcels of land in the region has angered some of the donors, who have accused the government of treason.

In a joint press conference with Blinken on Tuesday, Foreign Minister Christophe Lutundula defended the decision.

“Our commitment, as I said, to protect and ensure biodiversity – I want to assure everyone here that we will stand by the commitment,” he said in French, speaking through an interpreter. The plots would not be “sold,” he said, but would be auctioned off as concessions.

“The Democratic Republic of the Congo is a paradox… a prosperous country but with a very poor population,” he added. “The challenge is to find a balance, a balance between the well-being of the Congolese and also the need to ensure … ecological framework conditions.”

His statements did little to calm environmentalists, who say even limited oil and gas exploration would unleash a “carbon bomb” of destruction.

Blinken also met with several academics and professionals from eastern Congo on Wednesday in Kinshasa, where a violent militia backed by neighboring Rwanda, according to the United Nations, has attacked and killed scores of civilians. Blinken said efforts to defuse tensions between Rwanda and Congo had been a key objective of his trip, and he traveled to the Rwandan capital of Kigali later on Wednesday.

Congolese and international activists called on Blinken to take a firm stand against the Tshisekedi government and to denounce the escalating repression.

“The DRC of President Félix Tshisekedi faces widespread human rights abuses and corruption, protracted attacks on civilians by numerous armed groups, and failed democratic institutions,” Human Rights Watch said in a statement. “The forests and peatlands of the Congo Basin, which are critical in the fight against climate change, are at increasing risk from deforestation and mining.”

Ida Sawyer, who works on conflict resolution for the human rights group and is an Africa expert, called on the Biden administration to reappoint a special envoy for the Great Lakes region, which includes Congo and Rwanda.

Otherwise, she said in an interview: “Tshisekedi’s lack of legitimacy [means] You won’t see him reform.”

How Spain's top sides stack up to Real Madrid, Barcelona

Spotted lanternfly 2022: Here’s what you may start to see more of the invasion pest