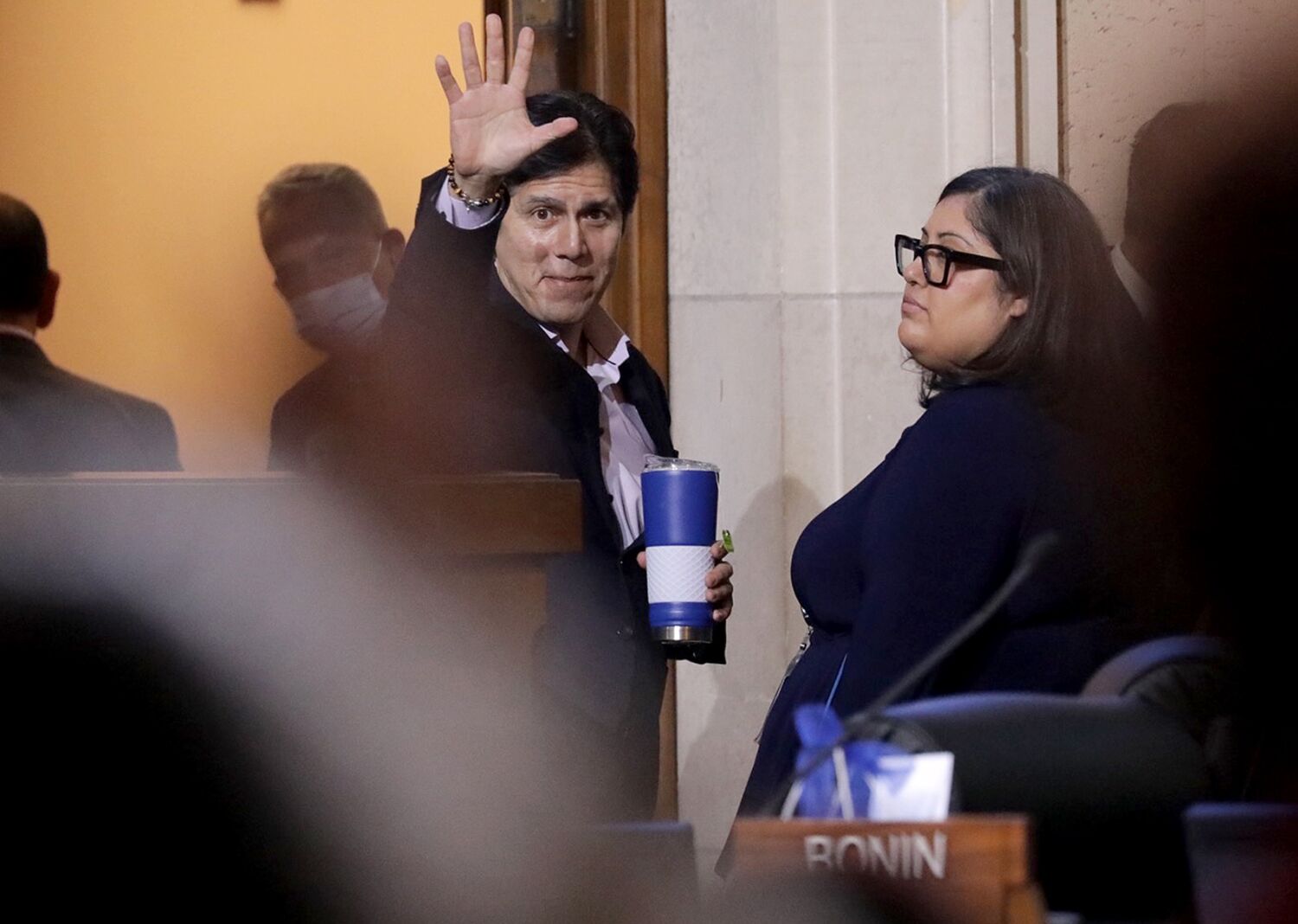 A loud and violent week in Los Angeles politics has some insiders questioning whether the city council — the body tasked with governing the second-largest US city — remains a safe place to work.

On Friday night, embattled Councilman Kevin de León smiled in a Santa hat and handed out gifts to children in Lincoln Park as protesters with cellphone cameras rolling emerged to loudly denounce him as a racist and call for his resignation.

The group chased De León around the Christmas party until one of them, Jason Reedy, got in touch with the city council and a physical altercation ensued. Both sides have lodged complaints with the police.

Protesters posted videos on social media of De León pushing Reedy onto a table, and the melee became national news.

On Saturday afternoon, across town at Loyola Marymount University, newly elected councilor Traci Park’s swearing-in ceremony was loudly interrupted by protesters who had to be removed by police.

The weekend’s events followed an uproar at Friday’s city council meeting, where protesters, including Reedy, berated De León and engaged in a shouting battle with the councilor’s supporters. The meeting had to be adjourned while Los Angeles Police Department officers filled the room and restored calm.

“This is a working environment,” De León spokesman Pete Brown said Sunday. “No one should be harassed or physically attacked like this at work.”

Reedy has been harassing De León and his associates for years, Brown said.

“He’s a repeat stalker, a serial stalker, and he’s totally out of control,” Brown said. “Jason Reedy yelled ‘F— you’ at me and asked if he could come over to my house where I live with my wife and three daughters,” Brown said. “As a city employee, I worry and wonder who has my back.”

“I can’t work like that, and that’s the bottom line,” Barraza said. “None of us can do that. It is impossible for us to provide the services to our constituents that we need to provide and the work that we need to do every day if this is done constantly.”

Direct confrontation has been a staple of Los Angeles political life for years, with the public comment period at meetings providing a forum for citizens to vent – not always politely.

Some speakers who rise to address the council offer practical solutions to overlooked problems; many others just seem to crave a captivated audience and a chance to be heard. Profanity is common.

But as COVID-19 ended public gatherings, some LA activists took to the streets outside the homes of elected officials with their protests.

Since then, the temperature of the protests has risen, reaching boiling point after the release of a recording of three city council members and a prominent union leader casually exchanging racist comments during a private meeting.

De León, a Democrat, is the only person in this shot who still has his job, despite calls from all levels of the party, including President Biden, for his resignation.

In an interview with The Times on Saturday, De León reiterated that he has no plans to resign.

“My commitment is solid to my community, to my constituents,” he said. “I will not allow a group of extremely hostile individuals from outside the district to harass me, my staff, or my constituents.”

Reedy and colleagues at an activist group calling itself the People’s City Council — which urged Twitter followers to stalk outgoing council member Mitch O’Farrell until he was “afraid to show his face in public” — are among the most outspoken and most determined of De León criticism.

In an email on Sunday, Reedy’s attorney, Shakeer Rahman, said his client “only protested officers at public events open to the public” and “did not start protesting De León until February.”

De León has kept a low profile since the racist recording was published in October. Friday was his first appearance at a city council meeting in months.

“This is an officer who has been absent from City Council for two months and insists that the public cannot criticize him while in office,” Rahman wrote.

The protesters, who interrupted Parks’ swearing-in, released a statement over the weekend calling her “a supporter of systemically racist policies” and threatening to make her public life miserable, according to the Mar Vista Voice Twitter account.

“We will be vocal in our opposition to her policies in all public forums during her tenure as a Council Member,” the statement warned, “and we will continue to exercise our First Amendment rights no matter how often her staff and supporters attempt to silence her physically or.” attack us.”

The increasing acrimony around City Hall, along with chronic homelessness and crime, is one of many issues facing Karen Bass, who was sworn in as mayor on Sunday.

Brown wonders if protesters’ tactics have gotten things to the point where council members like the mayor need full-time security detail.

“I think this is a discussion that Council members will have. Councilor De León is not the first to be harassed,” Brown said.

Protesters “will continue to bully and disrupt until they get their way, and that’s just not how democracy works,” Brown said. “You don’t just intimidate people until you get your way.”

Lakers close six-game trip with win over the Pistons

When Did ‘Woman’ Become a Dirty Word?

Jessica Chastain Defends Florence Pugh For Exposing Her Breasts In Barbie-Style Dress-‘Why Is It So Threatening?’