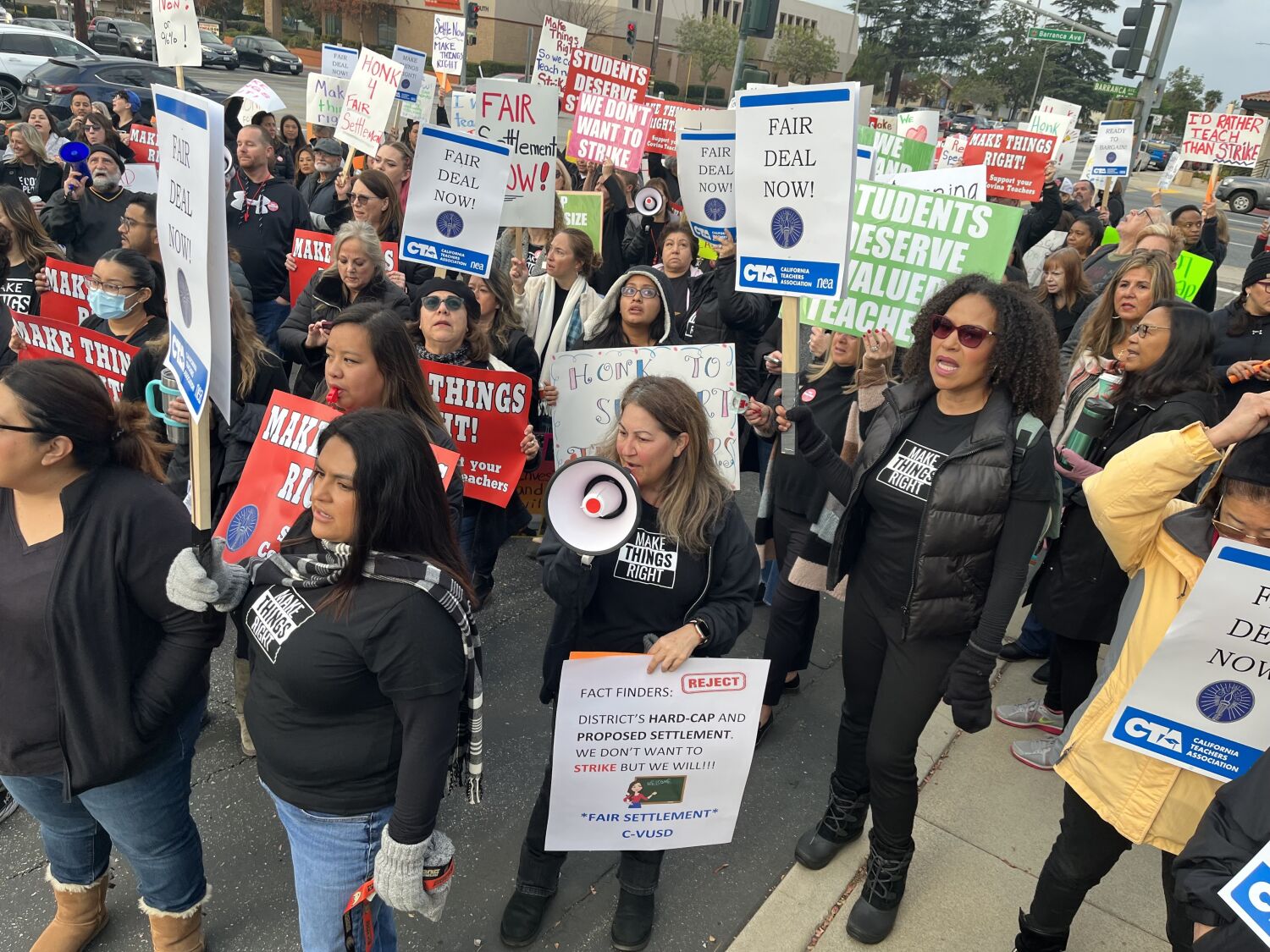 Tensions ran high in the Covina-Valley Unified School District on Wednesday, as it stood on the brink of a planned teachers’ strike Thursday, while final desperate negotiations stretched well into the evening.

The strike, if it comes to pass, would be an anomaly at a time of relatively muted labor unrest in California’s K-12 public school systems, which is being buoyed by record levels of funding — although the money is not certain to remain at current levels.

A major bone of contention between the sides is health care benefits changes proposed by officials in the East San Gabriel Valley School District, which has about 13,400 students.

The district wants to set up a two-tier system where the dependents of new employees would have strict ceilings on healthcare spending. The union wants to maintain the status quo, where all family members receive the same benefits, with fewer restrictions on the amounts available for medical benefits.

On Wednesday, the two sides also hadn’t reached a full agreement on compensation, although they were close over the pay rise union members would receive for the already-concluded 2021-22 school year.

“We believe we can converge on salary and other issues,” Adam Hampton, president of Covina Unified Education Assn., said Wednesday morning. “The trigger is healthcare.”

As of 6:30 a.m., more than 300 pickets demonstrated in front of the district headquarters.

“I have to stand up for the younger teachers,” said Susan Ricker, a learning specialist and longtime teacher at Manzanita Elementary School in Covina. “The young teachers out here. They have to live outside of our neighborhood because they don’t make enough money to live here. You can have young families. You can’t afford the insurance.”

County officials declined to be interviewed but released a statement on Wednesday. They have posted updates online as has the union.

“We are discouraged that union time, talent and energy would be focused on a strike rather than trying to reach an agreement,” the district statement said, “especially considering that teachers in Covina- Valley are and will be among the best paid and will continue to have, under the District’s proposal, one of the best medical benefit packages in the entire region.”

The district statement added that officials “hope we can resolve our differences and come to an agreement.”

Negotiations began shortly after the 9 a.m. rally. The teachers returned to district headquarters after school to demonstrate again. By early evening no solution had been reached.

Although an agreement on social benefits could avert a strike, both sides still have work to do. As with other union contracts, each side can raise a number of issues within the framework of an existing, ratified contract. These are called “reopeners”. These issues—although few in number—may include salary negotiations. In Covina-Valley, the previous teachers’ contract, which expired at the end of June, has left unresolved issues about compensation and how cases of students with disabilities are handled.

Regardless, the two sides must then reach an agreement for the current school year and beyond under a fully negotiated new contract.

A union spokesman said Wednesday afternoon the union’s immediate aim was to reach an agreement for last year and this year.

Nearly 70% of the district’s students are from low-income families and approximately 80% are Latino.