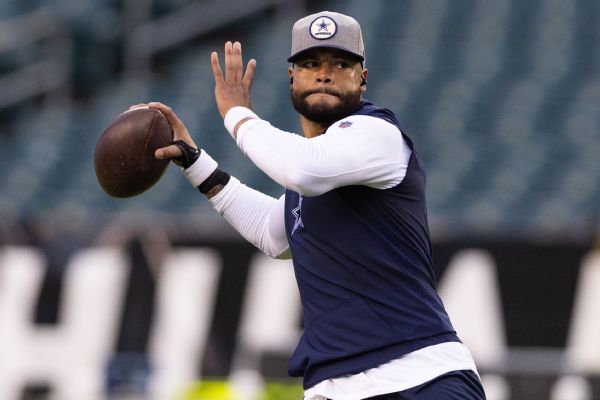 PHILADELPHIA — Dallas Cowboys quarterback Dak Prescott is eyeing a return from a broken right thumb against the visiting Detroit Lions next week.

“That’s my plan,” Prescott said as he walked to the team bus following the Cowboys’ 26-17 loss to the Philadelphia Eagles Sunday night. “Of course I have to see the doctor, but yeah, that’s kind of my plan.”

Prescott has missed the last five games after suffering an injury in Dallas’ season-opening loss to the visiting Tampa Bay Buccaneers. He underwent surgery on September 12 and had a recovery schedule of four to six weeks. Last week was the first time he threw passes and snapped, and he was listed as a limited participant in training on Thursday. While Prescott was questionable for the matchup with the Eagles, Cowboys coach Mike McCarthy wanted him to practice for a full week before returning.

“I plan on going into this week and trying to get my full week of training,” Prescott said.

Prescott wears tape on his thumb, “just for comfort, and it all worked.”

“I’ve done so much over the past few days and it’s been exactly as planned,” Prescott said. “Felt just as good [Saturday]. So yeah, right on track.”

Cooper Rush had won four straight games in Prescott’s absence and started Sunday without an interception but was picked off three times by Philadelphia, including twice in the first half when the Eagles took a 20-0 lead. Rush finished the game with a touchdown for 181 yards on an 18-of-38 pass and helped the Cowboys cut the lead to 20-17 early in the fourth quarter.

Prescott was effusive in his praise for Rush and the team.

“I mean, I never really had any doubts that the team wouldn’t do what they just did,” Prescott said. “Obviously you all know me [I’m] very optimistic. I’m very proud of this team, know the guys on this team, the defense, know what Cooper is capable of. So yeah, I’m obviously disappointed that I haven’t been able to be with the guys for the last five weeks I guess. But excited to be moving forward and happy as hell with the position we’re in and we’re good to go.”

As Cowboys Pro Bowl right guard Zack Martin said, “If you get your starting quarterback back [it’s great]. But Coop, I can’t say enough about what he’s done for us this year. We talked after the first game about having to fix the ship meanwhile [No.] 4 is out. I believe Coop answered the bell and did just that. He’s done a great job. But obviously Dak will be ready when he’s ready to go.”

The Cowboys have not surpassed 25 points in Rush’s five starts. The third down offense was a fight that continued against the Eagles (4-of-10). The Cowboys were able to win with a turnoverless offense, a solid running game and a defense that didn’t allow more than 19 points in the first five games.

“We’re ready to get 4 back,” Dallas running back Ezekiel Elliott said. “As long as he’s healthy and ready to go, it will be good to get him back.”

How good can the offense be on Prescott’s return?

“The sky’s the limit,” said Cowboys wide receiver CeeDee Lamb. “The offense is very good and everyone knows that. If we get him back we will show everyone.”

Though he hoped to return sooner, Prescott said he wasn’t frustrated.

“I had plans; [the] Bone didn’t have the same plan,” Prescott said. “So that was postponed, but that was my zeal. That was nothing but the plans of the doctor, the coach. As I said, the plan now is to go next week and see if I can do it.”

Cowboys’ Dak Prescott – ‘No excuses’ for costly INTs vs. Niners

Why can’t Barcelona register their summer signings yet? Explaining their financial crunch before LaLiga start