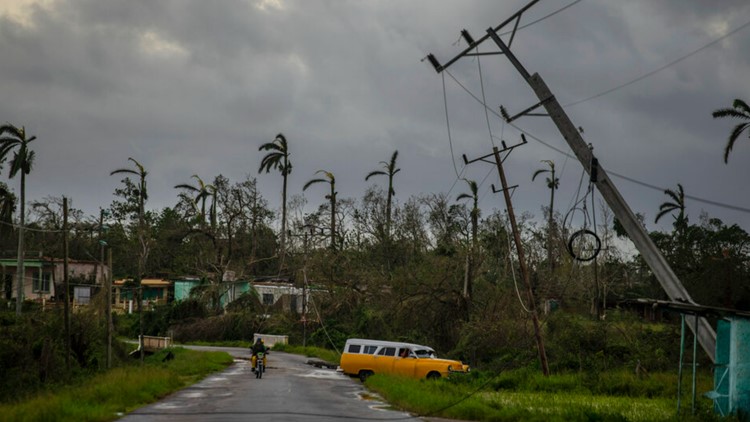 Ian made landfall on the west coast of the island as a Category 3 hurricane early Tuesday. The country’s 11 million inhabitants are gradually being supplied with electricity again.

HAVANA, Cuba — Cuba remained in darkness early Wednesday after Hurricane Ian knocked out its power grid and devastated some of the country’s main tobacco farms as a severe storm hit the island’s western tip.

Authorities worked overnight to gradually restore power to the country’s 11 million residents, according to a statement from Cuba’s Electric Union. Initially, about 1 million people in the western provinces of Cuba lost power, but later the entire power grid collapsed.

Ian met a Cuba struggling with an economic crisis and frequent power outages in recent months. It made landfall as a Category 3 storm on the western end of the island, devastating Pinar del Río province, which grows much of the tobacco used in Cuba’s iconic cigars.

Tens of thousands of people were evacuated and others fled the area ahead of Ian’s arrival, causing flooding, damaged homes and downed trees. Authorities were still assessing the damage, although no deaths had been reported as of Tuesday night.

Ian’s wind damaged one of Cuba’s most important tobacco farms in La Robaina.

“It was apocalyptic, a real disaster,” said Hirochi Robaina, owner of the farm that bears his name and that his grandfather brought to international fame.

“Being in the hurricane was terrible for me, but we are alive here,” said Yusimí Palacios from Pinar del Rio, who asked the authorities for a roof and a mattress.

Officials had set up 55 shelters and taken measures to protect crops, especially tobacco.

Ian was expected to pick up steam over the warm Gulf of Mexico, reaching peak winds of 130 mph (209 km/h) as he approached Florida’s southwest coast, where 2.5 million people were ordered to evacuate.

As the center of the storm pushed into the Gulf, scenes of destruction emerged in Cuba. Authorities were still assessing the damage to his world-famous tobacco belt.

Local government broadcaster TelePinar reported severe damage to the main hospital in the town of Pinar del Rio, tweeting photos of collapsed ceilings and downed trees. No deaths were reported.

“The city is flooded,” said farmer Andy Muñoz, 37, who lives in Playa Cajío in Artemisa.

He said many people lost their belongings in the storm surge.

“I spent the hurricane at home with my husband and the dog. The brickwork and zinc roof of the house had just been put in place. But the storm tore it down,” said Mercedes Valdés, who lives on the highway that connects Pinar del Río to San Juan y Martínez. “We couldn’t salvage our stuff … we just went out.”

https://www.king5.com/article/news/nation-world/cuba-no-electricity-after-hurricane-hammers-power-grid/507-7779e3b7-0dcb-4687-9f31-24317bfc1d07 Cuba without power after Hurricane Ian knocks out grid

Review: Jo Ann Callis' perplexing photos are as evocative as a Hitchcock film

10 Under-$200 Trendy Fall Shoes From Nordstrom

Can California deliver on its zero-emission car goal?