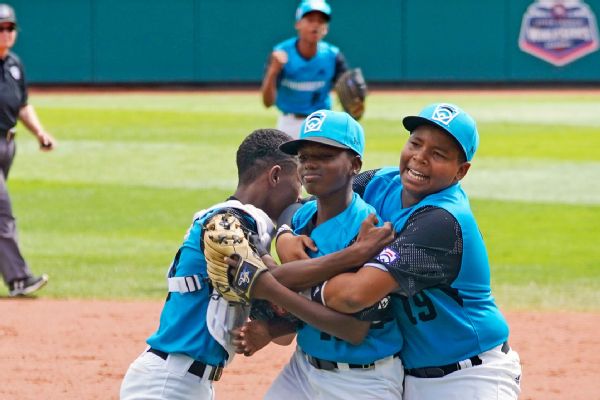 SOUTH WILLIAMSPORT, Pa. — Reangelo Decaster threw 4 2/3 innings of shutout ball and Jaydion Louisa tapped in a run with a pinch-hit dribbler on Saturday to lead Curacao to a 1-0 win over Taiwan and gain promotion to Little League World series championship.

Curacao plays either Hawaii or Tennessee on Sunday, who were scheduled to play later in the day.

Reangelo got some defensive help as he worked out of a first inning jam thanks to a flyout and a groundout with third-place Liao Yuan-Shu. In the fourth, left fielder Jaythan Cordilia ran down and grabbed a flyball that flew to the corner. After that, he was hugged by midfielder Davey-Jay Rijke for his efforts.

In the fifth, Taiwan loaded bases on singles from Wu Hsuan-Hung, Hsu Ta-Sheng and Liao Yuan-Shu, ending Reangelo’s day as he surpassed the 85 pitch limit for Little League. Qshondrickson Doran came in with two outs against Tseng Yi-Che, causing him to fly left.

Davey-Jay then made a warning lane catch on a deep fly ball out of Wang Yuan-Fu’s racquet to maintain Curacao’s sixth-round lead and was mobbed by his fieldmates.

Curacao scored in the bottom third. Alexander Provacia led the inning with a colorful single and moved up to second place due to a throwing error. Alexander advanced to third with a pass and hit with Jaydion’s single, a grounder that found a sweetspot between first and second base to give Curacao a 1-0 lead.

Curacao, a Caribbean island of just over 150,000 people, has a tournament title coming in 2004. But Curacao was also the last international team to compete in the LLWS Championship in 2019 when it fell to Louisiana. The 2020 tournament was canceled due to the coronavirus and last year only US teams played due to travel restrictions caused by the pandemic.

Taiwan is historically one of the top international teams in the LLWS, having won 17 titles. But his last championship came in 1996.

Li Fang-Mo excelled on the mound despite the loss for Taiwan, throwing five innings with one ball and three hits and beating nine Curacao batters.

Raiders return to L.A. — it’s as if they never left